Dallas, TX - Monte Anderson and I bump into each other every once in a while. Today the developer is taking me on a tour of a work in progress. I don’t bring it up, of course, but whenever he and I do run into each other, I can’t help but recall the first time he saw me in the company of my wife,

16 years ago in the lobby of the Belmont, the wonderful hotel he had just finished restoring high on a bluff over the river in Oak Cliff.

He did what I remember as a quadruple take. Allowing for my memory’s tendency to exaggerate sometimes, it might have been a double take. I remember him repeatedly squeezing his eyes as if trying to make something go away, then blurting to Mariana, “You’re married to him?”

It happens. Years before, I had written an unflattering description of a real estate project in which he was involved—a story that may have been a bit off. I had forgotten it by the time we ran into each other at the Belmont. He clearly had not. My wife, Mariana Greene, whom everyone always loves anyway, was an editor and writer at the Dallas Morning News at the time, and she had written an extremely flattering piece about him and the Belmont.

Monte Anderson scorns public subsidies and invests in neighborhoods most developers run from. He hasn't lost yet.

He had no idea we were a couple. So what? Does that make our long, happy union a crime against nature? The point is, in the many years since that odd but memorable meeting, Anderson has gone on to prove me wrong about a millionfold (and my wife right, curses!) not only in Dallas, where he has reprised his triumph at the Belmont several times over, but around the nation, where he has become a sought-after speaker and folk hero in a whole new movement and approach to urban development called “incremental development.”

Incremental development is all about residential and business real estate development that comes up organically out of the ground without government subsidy or tax giveaways. There is a secret to it, a key concept at its core.

The secret is don’t just build big stuff because you’re a builder. Don’t build big because you think you’re going to charge by the square foot for a lot of square footage. Build to the ability of the tenants to make money and pay a mortgage. In a poor area, stay small, keep rents low, and teach tenants how to start up successful businesses so they can pay you the rent. 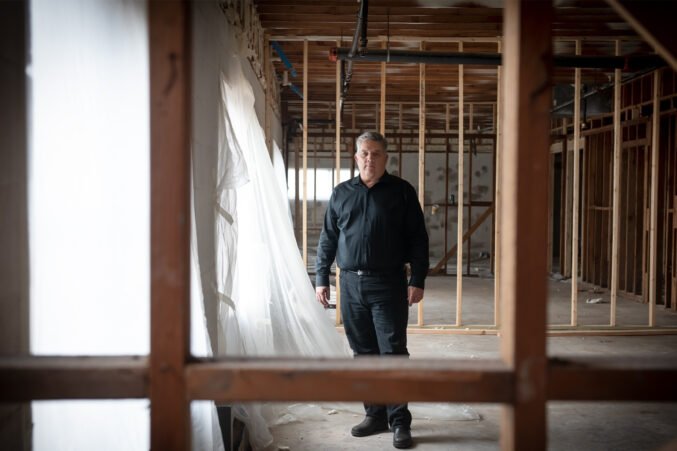 Real Stud: Anderson gets $18 per square foot where others might get only $6. Elizabeth Lavin

Anderson has a solid track record of success. Since restoring the Belmont, which he sold, he has knocked out other home runs like Tyler Station, a former environmental disaster he turned into a profitable collaborative workspace; Fire Station 15, now a restaurant; Midtowne Midlothian, a 133-acre mixed-use development in the southern suburbs; as well as some 30 other properties. He is the founding president of the North Texas chapter of the Congress for the New Urbanism, a co-founder and faculty member of the national Incremental Development Alliance, winner of the 2020 Community Award (for “meritorious work”) from the Dallas chapter of the American Institute of Architects, and a member of the Duncanville City Council.

Today we are walking around inside a gutted DISD building that has been vacant for 10 years, on South Beckley, 4 miles south of downtown. What a crappy school building this must have been. DISD bought an old rambling masonry structure, stuck a second story on top, and clad the addition in metal siding. It was an “alternative” disciplinary school, so I guess they wanted the kids to know what to look forward to in prison.

Anderson is completely reframing the building inside. If the end product comes out anything like his graphics—and his products always do­—then the redone building will be a chic shopping center housing a vegan restaurant, a series of micro-retail enterprises on the first level, and artists’ studios upstairs.

He says, “Somebody asked me, ‘Well, do you have to get some people from Bishop Arts [in nearby prosperous North Oak Cliff] to move over here?’ I said not unless they want to. I’m interested in the people that live in this neighborhood being in this building.”

Incremental development is all about residential and business real estate development that comes up organically out of the ground without government subsidy or tax giveaways.

Anderson is 62 years old, looks more like 50, scrappier than last time I saw him, maybe on a health kick, always quick, alert, with just a tinge of old Texas in his speech. He grew up in Oak Cliff just as his neighborhood was becoming Black. “We lived at Polk and Camp Wisdom in the early ’70s,” he tells me.

At that time, in that part of Oak Cliff, some subdivisions were brand new; others were 20 years old. There were still dairy farms within a mile. School integration began about then, and the White families took off like war refugees.

“When the first Black family moved on our street,” Anderson tells me, “every person on the street put their house up for sale except for my dad. My dad was only 16 years older than me. He was one of those guys who said, ‘These are people just like us, and we’re staying.’ My mom was a telephone operator with Southwestern Bell at the time. Back then, Bell was already integrated, so she had friends who were Black. So I was lucky early on. A lot of my friends were Black.”

The area around the abandoned school we are touring is populated by poor people of color. In the surrounding census tract, average income is $11,759. A third of the populace lives below the federal poverty level. More than 50 percent of residents don’t have high school diplomas. The ethnic makeup is 81 percent Hispanic and 17 percent Black. This is not a market many Dallas developers would even consider pursuing.

But there are other numbers to see here. Ninety-five percent of the housing units in this census tract are single-family homes, of which 57 percent are owner occupied. However modest in amount, there is equity out there, people building family wealth. Anderson believes that people who have managed to build a little bit of equity under onerous negative pressure will be able to build a lot more if somebody opens the door and shows them how. “I think the people around here are the smartest people in the city,” he says, “because of what they have been able to do under the circumstances.”

But people in this market don’t often have business experience. A major part of his development process is helping tenants get started. “You teach them how to do just what the big boys do, how to do a business plan, how to go to the bank and get a loan. The bank is going to say, ‘Because you’re a higher risk, we want you to put 30 percent down.’ Then we teach them how to go out to family and friends, people in the community, and how to raise that money for a down payment. We call it friendly equity.”

Anderson partners with some tenants, makes personal loans to others. “I don’t check anybody’s credit or run background checks. I say, ‘Show me what you do. Are you good at something? Show me your craft or your skill.’ ”

His tenants do eyelashes and hair, sell hot dogs, dresses, art, insurance. He says his properties are always 100 percent occupied. His loans never go bad. “I’ve got a guy in a trailer from New Orleans selling Cajun food in DeSoto,” he says. “The city let me bust up a parking lot and pour gravel. He’s doing $25,000 a week at 50 percent profit, selling crab legs out of a trailer. Crab legs.

So he does all this as a charity, right? Oh, wrong, wrong, wrong. Monte Anderson is not out to lose money. By chopping down the size of his units and renting to more people who are making money, Anderson tells me, he is able to get rents of $18 a square foot in markets in southern Dallas and the southern suburbs. The rate the big guys get is more like $6 to $8 a square foot.

At the end of our tour, he stops in a dusty half-built room, puts up an arm on an unpainted window jamb, and holds me with his gaze. He has just a few more points to make, things he wants to see written down in my notebook before I’m done.

First, he says, “I do this with no subsidies of any sort. I just don’t believe in them. What subsidies do in my opinion is create unnatural things on the earth.”

Second, he says, this building in southern Dallas is going to make money for the city. “This will go from $350,000 on the tax rolls today to $2.4 million, with no subsidies, in South Dallas and in a food desert. This is going to help pay for the crumbling infrastructure we’ve got in this city.”

The last one he doesn’t say, but I can tell. He still can’t believe she married me. He has no idea how charming I can be. That’s my secret.