Instead, he goes out a hero.

Rhoden and fellow officer Isai Chapa had a busy weekend shift late last month, first responding to a Saturday night shooting at a party, then getting called away a few hours later to a major accident at Pleasant Run and Joe Wilson roads.

In the 900 block of Joe Wilson, they found a couple of bystanders hovering over a man who had been struck by a driver as he tried to put gas in his car on the side of the road. According to witness Evonne White, a DeSoto resident who called 911, the 28-year-old victim’s leg appeared to be “missing.”

The officers are being credited with saving the man’s life.

The two officers buckled the police-issued tourniquet around Bell’s leg and got him stabilized before paramedics arrived two or three minutes later, Chapa said.

“They already had a makeshift tourniquet on him, like a shirt or something,” Chapa said of the bystanders who stopped to help.

The man, whose leg could not be saved, remains hospitalized at Methodist Dallas Medical Center. He could not be reached for comment.

Pablo Lincoln, 42, was arrested and charged with intoxication assault causing serious bodily injury. He was released from the DeSoto jail after posting bail.

Rhoden, 32, a 10-year veteran of the department, had turned in his retirement papers well in advance of the Feb. 27 shift. The Waxahachie resident and father of three girls said he is going to work in the insurance industry. Rhoden, who was a K9 officer, took his dog Ranger with him into police retirement

“We’ve worked on a lot of the same shifts and gotten close over several years,” Rhoden said of his relationship with the 26-year-old Chapa, a Marine Corps veteran. “We’ve hung out outside of work.”

The Cedar Hill City Council plans to honor the pair during its regular meeting at 7 p.m. April 12.

“I’m very proud of them for using their skills that they learned in training,” Cedar Hill Police Chief Steve Rhodes said. The training was actually intended to save officers, he said. “Who would have thought that the training that was designed to save their own lives was used to save someone else’s? That’s the amazing thing.”

Cedar Hill officers were first issued tourniquets as standard equipment a couple of years ago. To Rhodes’ knowledge, Rhoden and Chapa are the first officers in department history to use them on duty.

The officers said they were amazed to find the victim talking and coherent at the scene of the crash.

“He was in shock, but he was very aware,” Rhoden said. “We were very surprised. He gave us his name and phone number — all of these details.”

The officers talked him through everything they did as they applied the tourniquet.

“We told him that it was going to hurt a lot and to squeeze our hands,” Chapa said. “And boy, did he squeeze.”

The man held Rhoden’s hand close to his face.

“I told him, ‘You can squeeze as hard as you want, but please don’t bite me,’” Rhoden said.

Chapa and Rhoden praised the efforts of the accident’s witnesses.

“It was good to see your normal, everyday citizen out there helping instead of standing around filming,” Rhoden said.

Lincoln, the man charged in the crash, also helped at the scene, said White, an insurance agent who was driving eastbound on Pleasant Run with her cousin when the victim’s car was struck.

White parked nearby and called 911.

“I looked over and saw so much blood,” she said. “I couldn’t get too close.”

White said Chapa and Rhoden “didn’t do the normal thing in trying to talk to witnesses or anything.”

“They just immediately went into action trying to stop the bleeding.”

Both officers visited the victim in the hospital the next day.

“He was in high spirits, and that was very rewarding,” Chapa said. “He recognized us right off the bat. We were humbled by the experience.” 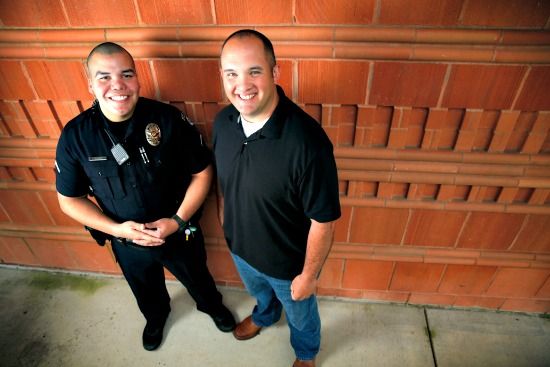 During Andrew Rhoden’s last shift as a Cedar Hill police officer, Rhoden (right) and his partner, Officer Isai Chapa, helped save a man whose leg was severed when he was struck by a suspected drunken driver.