Cedar Hill, TX - Cedar Hill election workers accused of improper practices, including spying on black voters at a polling place, have been temporarily banned from election work as part of a deal to avoid prosecution.

The Dallas County district attorney’s office confirmed that it has agreed not to prosecute the poll workers as long as they abide by the terms of a confidential agreement. Such agreements are sometimes offered to people suspected of nonviolent crimes who have no criminal records.

The Dallas Morning News learned some details of the deal because they were released to a candidate who filed a complaint over the City Council race in June.

Rick Cook, who faced a felony charge for divulging voters’ preferences to colleagues at a polling site in the suburb southwest of Dallas, cannot participate in elections for two years under the agreement. He did not respond to a request for comment.

Last fall, Cook acknowledged in an interview with The News that he had watched how some voters marked their ballots, then shared the information with his co-workers. But Cook, who as an election judge oversaw the polling place, said he wasn’t trying to interfere with the election.

Elaine Cook, his wife and fellow poll worker, faced a misdemeanor charge tied to improperly influencing voters for expressing her support for the incumbent. She agreed to a six-month ban. She did not respond to a request for comment.

The criminal case was sparked by a complaint from Shenita Cleveland, an African-American council candidate who lost to Anglo incumbent Daniel Haydin in the June 10 runoff election.

Cleveland said she hopes the punishments serve to prevent election improprieties in the future.

"The Cooks have been shown mercy, mercy that others in the justice system often are not afforded,'' she said.

The complaint was based on the account of Jenny Martinez, a bilingual translator at the voting site. She reported that Rick Cook stood close enough to voters to observe how they marked their ballots.

Throughout the day, Martinez said, the Cooks and a third clerk, Pamela Prince — whom the DA did not seek to prosecute — discussed how black voters were voting and expressed their support for Haydin. Poll workers are paid volunteers. All three workers denied wrongdoing.

“As a bilingual poll clerk, I was honored and excited to serve my community,’’ Martinez said. “But I was devastated to observe a longstanding election judge and his poll workers’ behavior at the polls.’’ 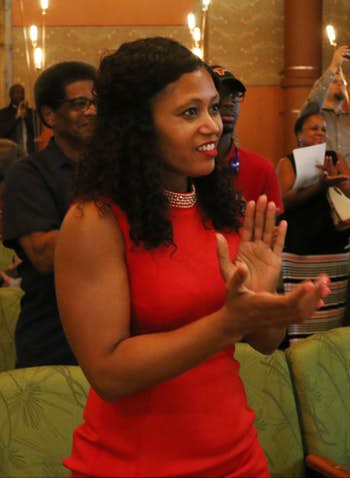