Cedar Hill Firefighter: ‘Never Off Duty’ After Helping Save Life In Forney

Forney, TX - The right place at an awful time. A North Texas family is thanking a Cedar Hill firefighter for some off duty heroics that they say saved a loved one’s life.

That firefighter says there’s no such thing as off duty. 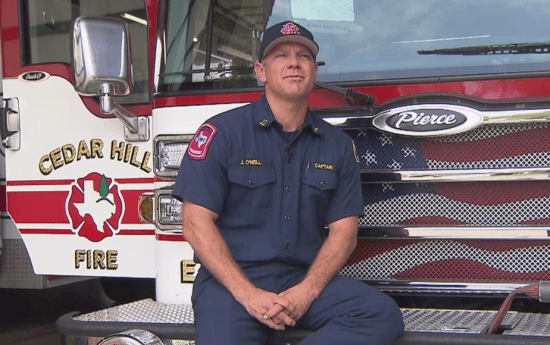 “I was no more than a mile from my house and my wife says, ‘what is that in the road?’,” says Captain Jason O’Neill. “There was an individual in the road, and I said, `oh, goodness, baby I gotta stop!’,” recalls O’Neill of the crash last month in Forney.

The minutes that followed were a ‘can’t miss’ reminder that the ripples in our lives, can make waves in others. You see, once upon a time, Captain O’Neill was what he calls a “well-paid soda pop salesman.”

“Working 70 hours a week, making a decent living; but, not living.” And then he says September 11th shook him to the core.

And he has. Captain O’Neill says he went into ‘work mode’ as he approached the single vehicle crash– stopping the driver’s bleeding, and alerting colleagues in Forney that the situation was dire.

“This guy was going to need an air ambulance, and we were going to need somebody quick,” recalls Capt. O’Neill, who also points out that a Methodist Hospital nurse and several others also stopped to help. The crash victim’s father, Robert Dobbs, later turned to Facebook to post a public ‘thank you.’

“I don’t think my son would still be alive if he hadn’t been at the right place at the right time,” says Dobbs. “It’s a severe injury that my son has; but, at least he has a chance.”

As for O’Neill, he insists that he was just doing his job. “I saw there was somebody in need and I have a duty to act.”

After all, he has family, too.

“I have a junior in High School, he plays baseball,” says the captain– for a moment becoming emotional as he spoke of his middle school son and his wife. “My kids and my wife are so important– they mean everything to me. Truly, I got into this because I wanted to make my family proud– my parents. I wanted something for my kiddos to look up to.”

And this humble, hero firefighter is not looking back.

“I think oftentimes God puts you in a poisiton to make a difference and that’s all we’re trying to do. Just glad I was there.”