Cedar Hill, TX - Cedar Hill police are looking for a man they think attempted to kidnap a teenager more than once.  Police responded about 9 a.m. Wednesday to a 16-year-old girl who said a man approached her near the 1000 block of South Clark Road,

asked her several questions and pointed a gun at her.

The suspect ordered her into the vehicle, and they drove off. The victim told police she jumped out of the car near High Meadows Way and Mt. Lebanon Road, tracked down another driver and used that person's cellphone to call 911. 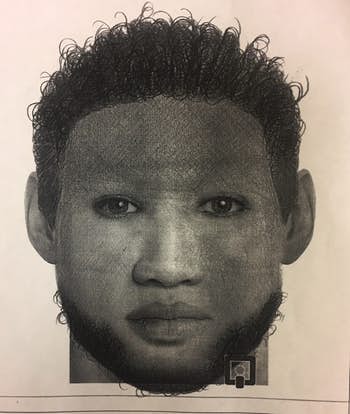 A composite sketch of a man Cedar Hill police are searching for in connection with an attempted kidnapping.

The man fled, and the victim was treated for minor injuries at the scene.

She told police that a man fitting the same description approached her several months ago but didn't brandish a weapon. Police suspect the man may live in the area, Lt. Colin Chenault said.

Officers have increased patrols nearby to find the man, who is described as a black man in his late teens or early 20s with a thick beard and no mustache.  He has a circular tattoo near his right elbow and a tribal tattoo farther up his arm, police said.

The victim, who provided enough details for the police to put together a composite sketch, was wearing a black shirt and black pants, Chenault said.