Cedar Hill, TX - A man was arrested for trying to kidnap a teenage girl at gunpoint.  Jaterin Tyler, 19, was arrested Thursday after Cedar Hill police released a sketch of the suspect.

The 16-year-old victim said a man approached her just before 9 a.m. Wednesday as she was walking home from her neighborhood recreation center in the 1000 block of South Clark Road.

"He allegedly pulled a pistol out and threatened her by telling her you need to get in the car," said Cedar Hill Lt. Colin Chenault.

About two and a half miles into their drive, she told police she noticed a car driving behind them near High Meadows and Mount Lebanon. That’s when she decided to escape by bailing out of the moving car. 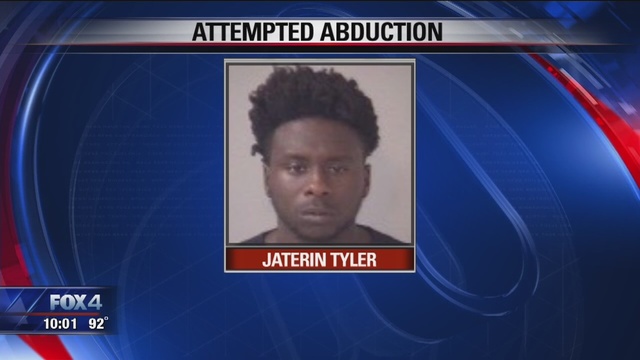 The teen then used the other driver’s cellphone to call 911.

“We’re just thankful that she was able to escape with just minor injuries,” Lt. Chenault said.

“I’m so proud of her. She took a chance and that’s what you do, you run away,” said Arrie Jackson, a Cedar Hill resident.

Police are crediting the victim and tips from both over the phone and social media for Tyler’s quick arrest.

The girl told police this was not the first time the suspect approached her. She said several months ago he was in the parking lot at her job in the same car and started talking to her. She said it didn't alarm her enough to notify authorities.

On Thursday, she worked with police to develop a sketch with details about the suspect’s tattoos and car. By Thursday afternoon, police had identified Tyler.

Police believe Tyler had been keeping tabs on the girl but have not said he was stalking her. There is no known relationship between the two and they don't live near each other.

Tyler has a criminal history that includes charges for burglary of a vehicle and evading arrest. He’s now facing charges for aggravated kidnapping.