Cedar Hill pastor shot himself as house burned with wife, teen daughters inside

Cedar Hill, TX - A prominent pastor found dead with his family after a February fire shot himself as their Cedar Hill home burned around them, police confirmed Friday.  Pastor Eugene Keahey's death on Feb. 28 was ruled a suicide by gunshot wound, according to the medical examiner's office.

The deaths of his daughters Darryn Keahey, 17, and Camryn Keahey, 15, were ruled homicides, after officials said they died from thermal burns and smoke inhalation.

A cause of death for DeAnna Keahey, the pastor's 51-year-old wife, is still pending.

Investigators have not determined what caused the fire but believe it was intentionally set.

Fire officials arrived at the home in the 700 block of Lovern Street around 4:30 a.m., shortly after the fire broke out on Feb. 28. Two people were quickly saved from a second-story window. 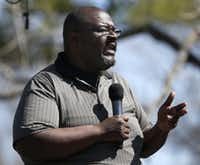 The state fire marshal is assisting police in determining the cause of the fire. Investigators are waiting for lab results from evidence samples submitted to the Department of Public Safety, police said.

The investigation shifted into a criminal inquiry after officials said possible accelerants were found in the home.

Eugene Keahey, 52, was pastor at Mount Zion Baptist Church in Sandbranch, a small unincorporated community in southeast Dallas County. He garnered attention in 2016 when he highlighted Sandbranch's water issues.

The community had gone decades without running water, and Keahey's campaign grabbed headlines while national attention grew on the water crisis in Flint, Mich.

"In a city where there was no attention being brought to, he changed that," Trisha Allen, a family friend, told The News in February. "He changed Sandbranch."

In addition to his work as a pastor, Keahey started an organization named Project DreamHaus, which helped at-risk youth, according to the group's Facebook page.

Antioch held a funeral service for Eugene, DeAnna and Camryn Keahey a few weeks after the fire. The service was streamed live.

Three weeks before his death, Eugene Keahey changed his Facebook cover photo to a picture with the words "We all have secrets."

Then 30 minutes before the fire was reported, he posted a vague message referring to "this difficult time in my life" and ended with the phrase, "Good Night Y'all."