Cedar Hill, TX - Just as restaurants around the state begin to reopen with strict guidelines and limits on occupancy, comes a reminder from Cedar Hill that for many it’s too little too late.​

“When I turned up in here, I said, ‘David’s looks like it’s closed’,” says customer, Gina L. “It’s really sad because the bottom line is: the workers, the family, the atmosphere, everybody’s impacted. It’s something that Cedar Hill has been used to. We’ll miss it.”​

Others like Joe Simnacher called David’s Seafood Grill a Cedar Hill institution for 14 years, adding, “You can’t get good seafood a lot of places anywhere in North Texas, much less in Cedar Hill.”​

A statement posted on the restaurant website, and quickly shared on social media, a son of the Chef/Founder, the late David Wilson, Sr., wrote about the difficult decision to close.​ 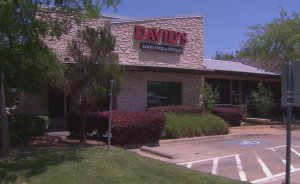 “We’ve had a great run and wish to sincerely thank the community of Cedar Hill and surrounding suburbs for your support and friendship… however, the combination of the impact of the COVID-19 pandemic, combined with an uncertain future operating environment contributed to our decision to close,” said David Wilson, Jr.​

“I can tell you that if people don’t start to mobilize and take care of these restaurants in a very big way, they won’t be there in the weeks to come,” warns Emily Williams Knight, President and CEO of the Texas Restaurant Association. “I think that’s the heartbreak that we’re starting to see in a place like David’s.”​

Hearing from members, Williams Knight says less than 5% of members were able to access stimulus funds, so more closures are likely coming. And those losses will hit small communities especially hard.​

“They’re the fundraisers for these communities and most important, it’s where local people work. At the end of April, we projected 700,000 jobs lost in our sector.”​

She says their researchers have estimated that some 35% of the state’s restaurants will not survive the COVID-19 crisis.​

“It’s the David’s of the world that really give people a wakeup call,” says Williams Knight. “That when you wake up from this and you’re able to get out and those favorite places aren’t there. Not only will it be too late, but I think it will change fabric of what we do before Friday night football games, and Sunday after church, across the state.”​

She encourages diners to support those restaurants that are still open by getting takeout if still uncomfortable dining in or ordering delivery directly from the restaurant and purchasing gift cards for later use.​

“Those independents have always been there for us,” says Williams Knight. “We have to be there for them now.”​