Cedar Hill - What 23-Year-Old Thought Was a Heart Attack, Was Actually Complications From COVID-19

Andre Tanner, who is from Cedar Hill, moved to New Jersey in October to pursue a career in the hospitality industry. He flew back home to Texas on June 26 to see his mom, and out of precaution was tested for COVID-19 on June 30.

He said he and other family members tested negative, but the following week something changed. 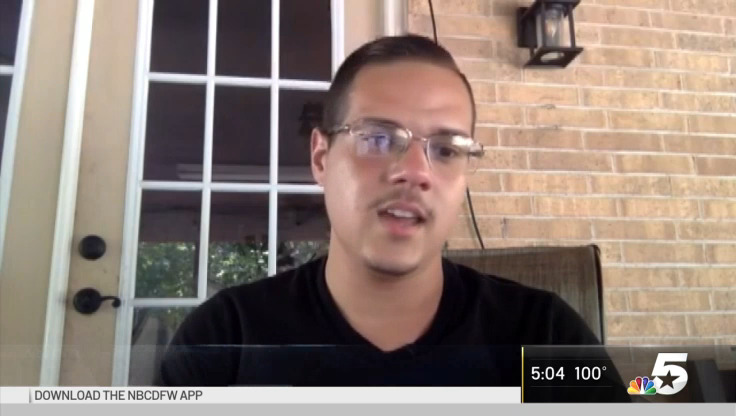 “I couldn’t tell if it was a heart attack or if I was having a stroke, I just knew something was wrong and something was going wrong very fast," Tanner said.

He said he was on the couch watching TV when he noticed pain in his chest and then his heart started to beat very fast. He felt pain on his left side and became dizzy. He reached for his phone and contacted his mom, seconds later, he blacked out and didn't remember anything until waking up in the emergency room.

"When she (his mother) came in the house, she said I was laying on the floor, my eyes were staring into space and I was hyperventilating and nobody could get me to respond, her or the paramedics," Tanner said.

He didn't have a fever and wasn't coughing, so he said doctors continued to go through a checklist to identify what was wrong. After ordering some tests, they found that he had two major blood clots on both sides of his lungs.

"That’s when they ordered a COVID-19 test as a precautionary. I was sent to the ICU, and in the ICU, they found two more blood clots in my right leg, one in my left leg and shortly after those, the COVID-19 test came back positive," Tanner said.

The 23-year-old said he was in disbelief because he never had symptoms and had tested negative for the virus a week ago. He said he's been wearing masks since the beginning of the pandemic and washing his hands since he's been living in New Jersey.

“After speaking to the infectious disease doctor and from my symptoms, he blames the blood clot on COVID because for somebody my age, not having any heart issues, never having blood clots before and for how thick my blood was and how fast it was developing, that’s the only thing he could think of. In the last week it had really progressed," he said.

Tanner said while in the hospital he was given oxygen to help him breathe. After he was told about the clots, he was given a grim prognosis.

"Just shortly being in the ICU and after finding out I was COVID-19 positive with the blood clots, that’s when the nurse practitioner came in and told me that there’s a high chance that I would not make it that night, but if I did, that they would do everything that they could but there was no guarantees," Tanner said choking up as he recalled the conversation.

He said the next day doctors operated on him to inject medication to help break up the clots in his lungs -- it worked.

"I'm still COVID positive and I still have to take blood thinners as of right now for another three to six months as I have blood clots. I still don't know what there is to follow as far as any other health conditions that can come from COVID, so I just want everybody to take the warnings and the precautions very seriously," Tanner said. "Even though you might not have a fever or a cough, you could be asymptomatic like me and not even know that you're spreading it or who gave it to you. Everything can change in a matter of less than 24 hours."

An interventional cardiologist from Methodist Charlton Medical Center said he and other colleagues have seen some patients come in with what appeared to be heart attack symptoms, but were actually an overlap from COVID-19 symptoms.

"People are showing to the ER with complaints of shortness of breath, chest pain, pressure. They very well can be signs of a heart attack, a heart condition," said Dr. William Posligua. "Nevertheless, these symptoms can overlap with the COVID symptoms that are also fever, chills, shortness of breath respiratory distress and very well can be COVID."

He said when they examine the arteries of the heart, they're not seeing blocked arteries.

"Findings have been, that the arteries are clean. There's no significant blocked arteries still they're presenting with a heart attack picture or an acute heart failure presentation," Posligua said.

He said regardless of what it could be if someone is presenting heart attack or stroke symptoms, call 911 immediately and get to an emergency room fast because time is of the essence.

He said he believes people were not showing up because of the concern for catching COVID-19, but he said it's important for people to go to the hospital for prompt care to avoid delayed complications or worse.