After being paralyzed in 2009, DeSoto's Corey Borner takes major steps in his recovery

DESOTO, Texas - In 2009, a DeSoto High School football player took a hit that left him paralyzed.  Ever since, Corey Borner has made it his mission to walk again. And this week, he took a major step toward that goal.

His journey is a testament of never giving up.

This summer, Borner took his first steps in 12 years, and just Wednesday, he set a personal record.

The 28-year-old thanks his family, his friends, and his faith for helping him reach an incredible milestone.

Outside his home in DeSoto, you can usually find Borner under his favorite tree. 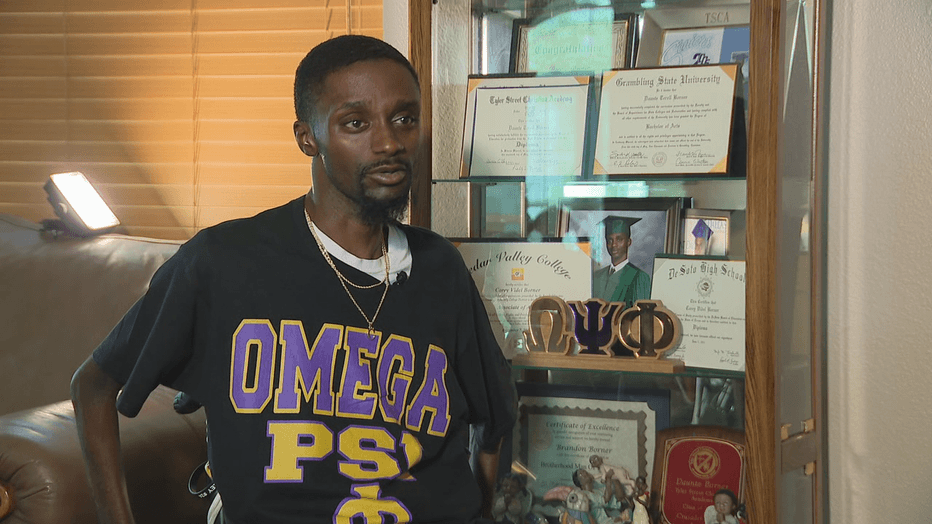 On Wednesday, Borner said it was game time, and took strides in his recovery.

As an athlete at heart, it was a huge win.

After 826 steps, Borner soaked in the moment, tearing up in the halls of Bayor Institute for Rehabilitation.

It was a moment doctors didn’t know would be possible, but Borner did.

"Find a way to get through it," he said.

In 2009, Borner suffered a life altering spinal injury when he just 16 years old.

A hard hit at a DeSoto High School football practice paralyzed the soon to be sophomore from the chest down.

Twelve years later, the now 28-year-old is up out of his wheelchair and walking.

"We all are going to have ups and downs, but why not have more ups than downs?" he said. "I want to find a way to take more steps."

Along the way, Borner continues to share his story of triumph as a motivational speaker.

He recently graduated from the University of North Texas at Dallas with a degree in communications technology.

And a few weeks ago, he got a surprise visitor when Dallas Cowboy Ezekiel Elliott stopped by with two signed two jerseys, one for Borner and one for his mom.

"We are both thankful for that. She was smiling more than I was. As long as she’s smiling, I will be smiling too," he said.

Borner said he calls his mom his biggest cheerleader, not to mention his 100,000 plus followers on Instagram and Twitter.

"I want to inspire others and let them know that they will be okay. If I’m not giving up, nobody should," he said. "Yeah, I go through some things in here, but I stay positive through it."

He has an appointment later this month to walk again, and he said this time, he’s going for 1,000 steps.