Three welterweight world title belts down, and one to go for Errol Spence Jr.

Dallas, TX - In a dominating performance, Spence stopped Yordenis Ugas in the 10th round to retain his WBC/IBF 147-pound world titles and take Ugas’ WBA belt in the Showtime PPV main event on Saturday night before 39,946 at AT&T Stadium in Arlington, Texas.

Then Spence called out WBO titleholder and fellow pound-for-pound-ranked Terence Crawford to fight him later this year in a division summit meeting the public has demanded for the past few years. If the fight happens, the winner would become the first-ever undisputed welterweight champion of the four-belt era.

But, first Spence had to get past Ugas, which he did with ease while also showing that he remains as good as ever despite lingering questions about his health.

The fight was only Spence’s second since he flipped his Ferrari in a serious one-car crash (for which he was charged with DUI) in October 2019 and his first since he was found to have a detached retina in his left eye during a routine pre-fight medical exam less than two weeks before he was supposed to fight Manny Pacquiao on Aug. 21.

While Spence, who was fighting for the first time in 16 months, had surgery to repair the injury, Ugas moved up from the undercard and retained his belt by decision to send Pacquiao into retirement and pave the way for the unification fight with Spence. 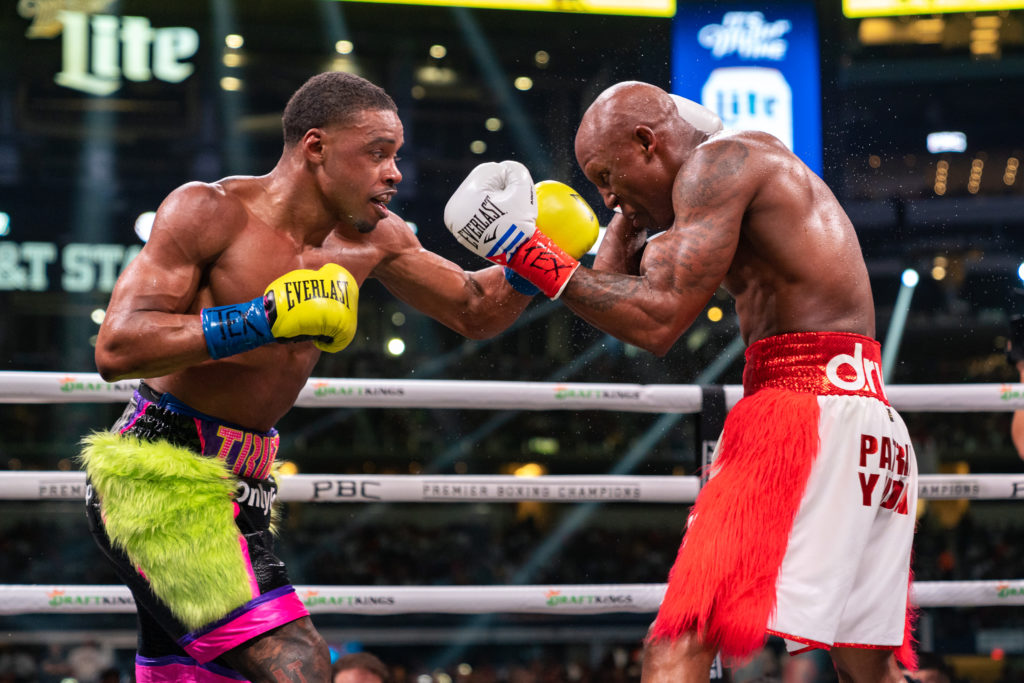 Spence (28-0, 22 KOs), 32, a southpaw from the Dallas suburb of DeSoto, Texas and fighting in front of his hometown fans, fought as though there were no medical issues at all because he looked as sharp as ever in delivering an impressive performance during which he slammed Ugas’ right eye closed to force the stoppage.

“It means a lot fighting in my hometown in front of my family, friends and everybody else who supports me,” said Spence, who headlined at AT&T Stadium for the third time in his last four fights. “These are my No. 1 fans that came out here to support me.”

While fans and media wondered about Spence’s health, he said he never had any concerns about his eye or any remaining issues from the car wreck.

“I believe that you’re going to go through trials and tribulations. I went through a lot of trials. I got tested and I passed the tests due to my upbringing. My mother and my father always telling me not to quit and not to give up and just believing in myself and my family. I wanted to prove them wrong, and I knew that I could come back. Why would I quit now?”

“I want Terence Crawford next.” — Spence

Ugas (27-5, 12 KOs), 35, a Cuban defector fighting out of Miami, came into the fight 6-1 against left-handers but was never really in the fight other than briefly in the sixth round.

Spence beat Ugas to the punch for most of the fight in what amounted to a battle of Spence’s left hand against Ugas’ right.

A hard right hand and a left uppercut in the fifth round backed Ugas up. Spence also ripped Ugas to the body in the round.

Ugas’ big moment came in the sixth round when he rocked Spence, knocked his mouthpiece out with an uppercut and sent him into the ropes.

Referee Laurence Cole could have called a knockdown because the ropes appeared to have held Spence up, but he did not. He also gave Spence valuable recovery time by halting the action so Spence trainer Derrick James could replace the mouthpiece midway through the round. Spence then finished the round strong.

“I thought the ref said stop, so I stopped and then he hit me with three or four shots,” Spence said of the rocky sixth round. “That’s my fault. That was a rookie mistake. You’re supposed to protect yourself at all times and I didn’t do that. I wasn’t out on my feet. I turned and looked at my mouthpiece (on the mat) and he hit me.”

Spence quickly got himself together and had a very big seventh round, lashing Ugas with his left hand and uppercut.

By the time the round was over Ugas’ right eye was swelling badly and the ringside doctor examined him in the corner. Cole called another timeout during the eighth round to also have the doctor check Ugas’ eye.

It was obvious Ugas had little to no vision in the eye by the 10th round and Spence hurt him with an uppercut. Ugas covered up and backed up and when Cole called yet another timeout to have the eye examined, this time the doctor advised him that Ugas could not go on and Cole waved off the fight at 1 minute, 44 seconds. 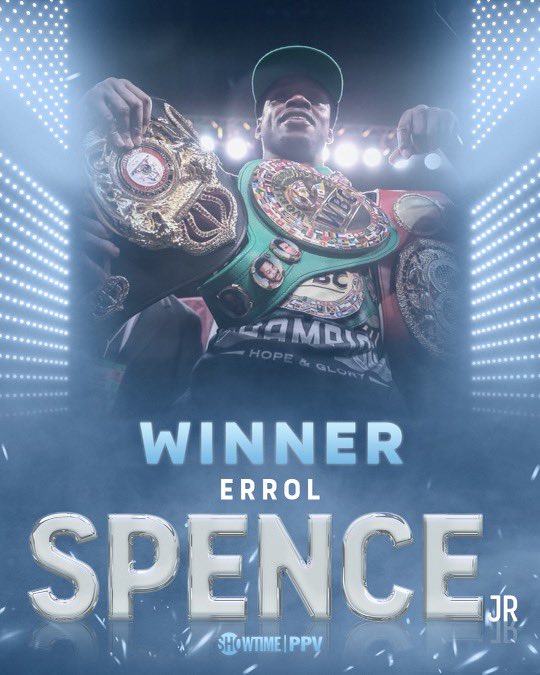 “I felt a little off with my timing, but I knew I was going to catch on later in the rounds,” Spence said. “I just kept working. I kept throwing punches and then sometimes I was being over patient. I was throwing punches instead of picking my shots. I had a long layoff and I was super excited to get back in the ring. I was trying to push the pace more than I needed to.”

According to CompuBox statistics, Spence landed 216 of 784 punches (28 percent), including 70 body shots, and Ugas landed just 96 of 541 (18 percent). Spence outlanded Ugas in every round except for the first and his 216 connects were the most ever by an Ugas opponent.

“I feel sad,” Ugas said through an interpreter. “I trained really hard for this fight. All my respect to Errol Spence. He’s a great champion. I’m just sad about what happened tonight.

“The referee stopped the fight, but I wanted to keep going to the end. I definitely had a chance to win the fight in the sixth round but he recuperated well. Congratulations to him and his team.”

Ugas was taken to John Peter Smith Hospital in Fort Worth as a precaution.

Then attention turned to the possibility of Spence-Crawford, which is one of the biggest fights in boxing.

It’s been talked about for years and with Crawford (38-0, 29 KOs), 34, of Omaha, Nebraska, stopping former titlist Shawn Porter in the 10th round in November and then becoming a promotional and broadcast free agent, and Spence stopping Ugas, the stage is set for the undisputed showdown — if they can agree on how to split all the millions the fight would generate.

“Congratulations,” Crawford tweeted at Spence immediately after the fight. “Great fight. Now the real fight happens. No more talk, no more side of the street. Let’s go!!!! Keep my belts warm. I’ll be coming to grab em later this year.”

Spence said that too is the fight he wants.

“Everybody knows who I want next. I want Terence Crawford next,” Spence said without hesitation. “That’s the fight that I want. That’s the fight everybody else wants. Like I said, I’m going to get these straps then go over there and take his sh*t too. Terence, I’m coming for that mother f%cking belt!”