Texas landed commitments from both Wisner and the extremely highly touted four-star Aldine Eisenhower (TX) wide receiver Ryan Niblett within the span of seemingly just a few minutes on the night of April 23.

Sark and the Longhorns staff instantly added two of their highest-rated commits in the 2023 class by landing pledges from both Niblett and Wisner during the weekend of the altered Orange-White spring football game.

Both Niblett and Wisner were in attendance in Austin this weekend for the spring football game. But Niblett was a planned visitor that was known on the list ahead of the weekend. Meanwhile, Wisner was more of a late addition to the visitor list for this weekend.

We weren’t really anticipating looming decisions from either one of these two blue-chip skill position recruits this weekend. This came as a very pleasant surprise in the midst of an important spring game weekend on the Forty Acres. 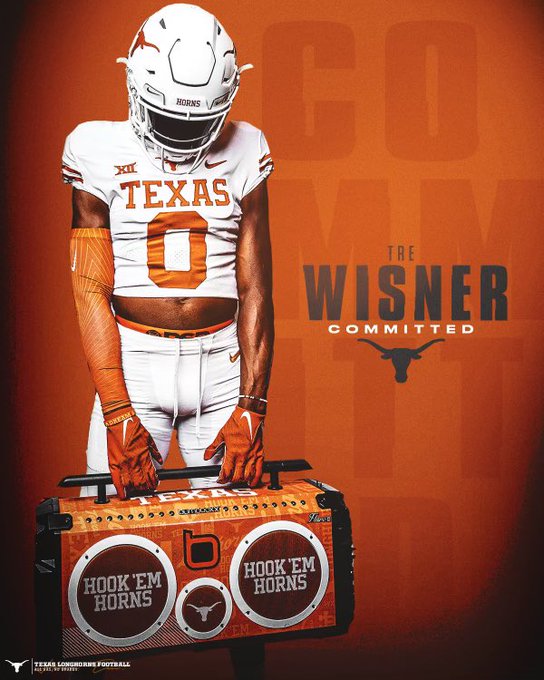 Since Wisner was one of the late additions to the visitor list for the Longhorns this weekend, it is even more surprising he gave his pledge to Texas compared with Niblett. That is especially the case since Wisner had the likes of the Oklahoma Sooners and Texas A&M Aggies putting the full-court press on him this spring as he took a plethora of visits to his top eight schools that were announced last month.

Texas landed the commitment of Wisner over offers from 20 other schools. Some of his other top schools that Texas beat out to land his pledge include the Oregon Ducks, USC Trojans, Oklahoma State Cowboys, Florida State Seminoles, Arkansas Razorbacks, Oklahoma, and Texas A&M.

Moreover, Wisner being a take in the Longhorns 2023 class likely means that Texas is planning on getting two running backs in the mix for this cycle. Texas still has some top running back targets on the recruiting trail for the 2023 class to add along with Wisner including the elite five-star El Campo product Rueben Owens and four-star Edgewater (FL) product Cedric Baxter Jr.

For the time being, though, we can focus on what Wisner brings to the table for the Longhorns 2023 class.

Texas is getting a powerful and polished running back that is an excellent depth add in the 2023 class in Wisner. This 5-foot-11 and 185-pound Dallas-Fort Worth Metroplex product has great field vision and could serve as an excellent third-down back for the Longhorns.

Wisner runs with an incredible amount of downhill power and hits the holes in the blink of an eye. He should serve as an effective change of pace back as well for Texas. Wisner will bring another dynamic to the table for Sark, Choice, and the Longhorns that plays well off of the skill sets of Jonathon Brooks, Keilan Robinson, Jaydon Blue, etc.

While Blue and Robinson are speedier and more elusive backs that can be real big-play threats, Wisner can keep opposing defenses on their toes as a powerful and decisive back capable of picking up the tough yards in tough spots. Part of his game could help Texas in the sense of being more of a traditional third-down back.

Don’t be fooled by some that will label Wisner as just a third-down/goal-line back, though. Wisner is an underrated receiver out of the backfield as he’s shown to have reliable hands and a pretty good route-running ability for a running back.

Wisner has the ability to still catch opposing defenses off guard by making plays as a checkdown back out of the backfield or by running short and intermediate routes. He can do that while either motioning on to lineup at the line of scrimmage or by breaking out of the backfield to run his route.

In all likelihood, Wisner will arrive on the Forty Acres as a planned second or third option in the running back room. Since Texas is probably going to take two running backs in this class (with Owens as the clear top priority), I would anticipate Wisner to really help add some punch to this backfield as a tough runner between the tackles. But he’s still someone that will be versatile enough to make plays as a receiver or blocker out of the backfield when needed.

Furthermore, Texas adding both Wisner and Niblett in the 2023 class has really vaulted this group high up in various national class rankings. Texas has now cracked the top 10 of the 2023 consensus football team rankings from On3. And Texas ranks at the top of the Big 12 in terms of the average commit ranking (per 247Sports) after nabbing these two skill position blue-chip recruits.

Texas is now up to five commits in the 2023 class, with the highest-rated being the in-state four-star wideout Niblett. Wisner is currently the only running back commit in the Longhorns’ 2023 or 2024 class.