DALLAS — A college community is mourning the death of a cheerleader from North Texas, who died after posting a heartbreaking note on her Instagram page.

Student-athlete Arlana Miller, 19, was a freshman cheerleader at Southern University in Baton Rouge, La., and was found dead late on May 4. Miller, a DeSoto High School graduate,

was pursuing a degree in agriculture, Southern University Director of Athletics Roman Banks said in a press release.

In her post, she mentioned that "I gave this life all the fight I had" and mentioned she hasn't been "okay for a while."

The post was later taken down a few days after Miller's death.

Banks said his department found out about this social media post on Thursday.

"Southern Athletics sends our sympathy to Arlana's family and friends," Banks said in the press release. "Our thoughts and prayers are with her family, rest of our department staff and student-athletes; and the entire SU community. Jaguar Nation is a close community and we grieve together during this difficult time. Arlana's teammates and coaches are also in mourning, and we are grateful for everyone who is helping and supporting the team."

Southern University cheerleading coach Floyd Sias said Miller made an impact on her team in a short time. 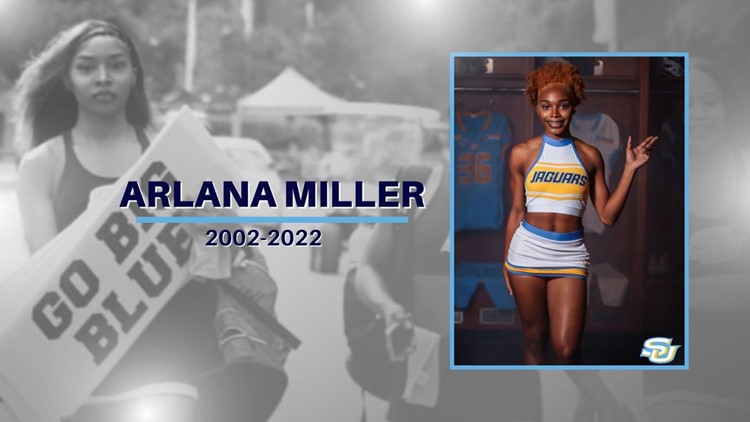 "She was extremely dedicated to her sport, a tremendously hard worker, and a warm and engaging young woman," Sias said. "She will be missed."

Southern University leaders said the University Counseling Center is offering its services to any students who may need support during this difficult time.

The university will have counseling available all day on the 3rd floor of the A.W. Mumford Fieldhouse for student-athletes and department staff, according to Banks.

The university also encouraged students to reach out to several crisis hotlines, if they need to, including 24/7 counseling services at 225-368-9602.

Miller's death comes amid the Mental Health Awareness Month, which is promoted by the National Alliance on Mental Illness. This year's goal of the awareness month is to amplify the message of "Together for Mental Health," according to the NAMI.

"Together, we can realize our shared vision of a nation where anyone affected by mental illness can get the appropriate support and quality of care to live healthy, fulfilling lives," the NAMI website said.