DeSoto, TX - It almost felt like DeSoto had won the Super Bowl. Celebration was in the air Monday morning at DeSoto High School,

the day after alum Von Miller led the Denver Broncos to a 24-10 victory over the Carolina Panthers.

The linebacker, who graduated from DeSoto in 2007, was named the game’s MVP, just the 10th time a defensive player has won the award in the Super Bowl’s 50-year history.

“I don’t know if ‘electric’ is the right word, but it’s close,” athletic director Larry Davis said. “Every teacher and every administrator is saying, ‘Here’s proof of how hard work and dedication pays off.’ ”

By mid-morning, DeSoto assistant football coach Brian Stansberry had given five interviews to media outlets about Miller, who was part of arguably the most talented class of football players the school ever produced.

“Every day he would come out here and make his teammates enjoy the game of football a little bit more,” said Stansberry, who has coached at DeSoto for 15 years and was Miller’s position coach. “He’d come out in the heat and see everybody kind of walking around, and he’d make it a little more joyous. It can be a grind, you know.”

The victory was extra sweet for Miller because he missed Denver’s 2014 Super Bowl appearance — a 43-8 loss to Seattle — with a torn anterior cruciate ligament.

During a news conference Monday, Miller told The Denver Post: “The MVP is special, but the Super Bowl ring is something I'll carry with me for life.”

“The thing that people don't know is, you see a great player like that play on a big stage and play a tremendous game like he did, but people don't see the work he put in to get there,” Kubiak told the Denver Post.

“His future is so bright.”

Davis said Miller was always a hard-working, intellectually curious student, and part of DeSoto High’s gifted and talented program. He’s also a strong example of an athlete who learns to thrive after overcoming a few personal shortcomings.

“He’s had a few bumps in the road, but he’s emerged the better for it,” said Davis, referring to Miller’s six-game suspension in 2013 for violating the NFL’s substance abuse policy.

“He’s been brought up in a very supportive environment with his mother, father and brother,” Davis said. “His parents are the type of people every school district needs to have.”

DeSoto wide receivers coach Terrance Orr played alongside Miller on DeSoto’s 2006 team, which reached the Class 5A Division I Region I final before losing to Cedar Hill.

“He’s a good friend and a great teammate,” Orr said. “I’m just overjoyed for the community. There’s a sense of, ‘If he can do it, I can do it.’”

Orr said Miller’s success is a product of what he learned at DeSoto, as well at Texas A&M, where he starred for four years before becoming the second pick of the 2011 NFL draft.

“DeSoto is a special place,” Orr said. “What a lot of people don’t understand is, there’s a brotherhood here and a sense of responsibility that comes with it.”

Miller returns to DeSoto, where his parents still live, on a fairly regular basis. After his rookie season, he donated 25 helmets to the football program. In Denver, he runs Von’s Vision Foundation, a nonprofit that supplies children with eyeglasses.

Miller is rarely seen without glasses, unless he’s wearing a helmet.

“I kind of kick back and giggle about that,” Davis said. “He’s probably got more glasses than most people have shoes.”

DeSoto ISD communications director Beth Trimble said the district would like to do something to celebrate Miller's achievement, possibly in conjunction with the city, but no plans have been made yet.

Davis was Miller’s principal in the fifth and sixth grade at The Meadows Intermediate, now an elementary school.

“Even then you could see there was something special there,” Davis said.

He recalled having to watch closely when Miller and his classmates played football during recess.

“That class, they would just get after it. They were way too aggressive,” Davis said. “We’d have to tell them, ‘OK, you can only play football on certain days,’ but then we eventually had to say, ‘OK, you can’t play football at all.’” 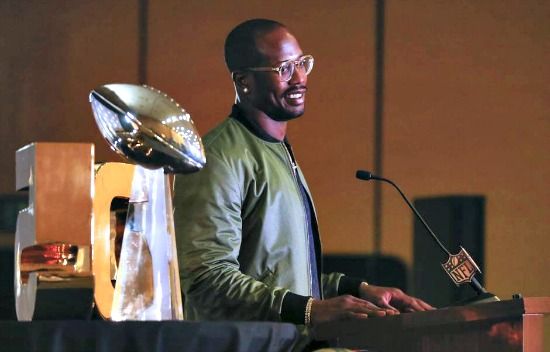