In statement to The News, DeSoto board president explains why no decision has been made yet about Todd Peterman

DeSoto, TX - One of the reigning state football champions could be looking for a new coach.  The DeSoto ISD school board Monday discussed the status of coach Todd Peterman,

who led the Eagles to their first state championship in 2016. After three hours of deliberation in a closed session, the school board took no action.

According to a report from The News earlier in the day, four of the seven board trustees were leaning toward firing Peterman, with Superintendent David Harris in favor of keeping the coach.

Board president Carl Sherman Jr. declined all questions following the meeting, which ended just after 11:30 p.m.

Sherman Jr. did, however, say this in a statement to The News:

"We've received information that warrants further consideration, and we've directed the Superintendent to conduct additional due diligence right away. We will release additional information as quickly as we possibly can." 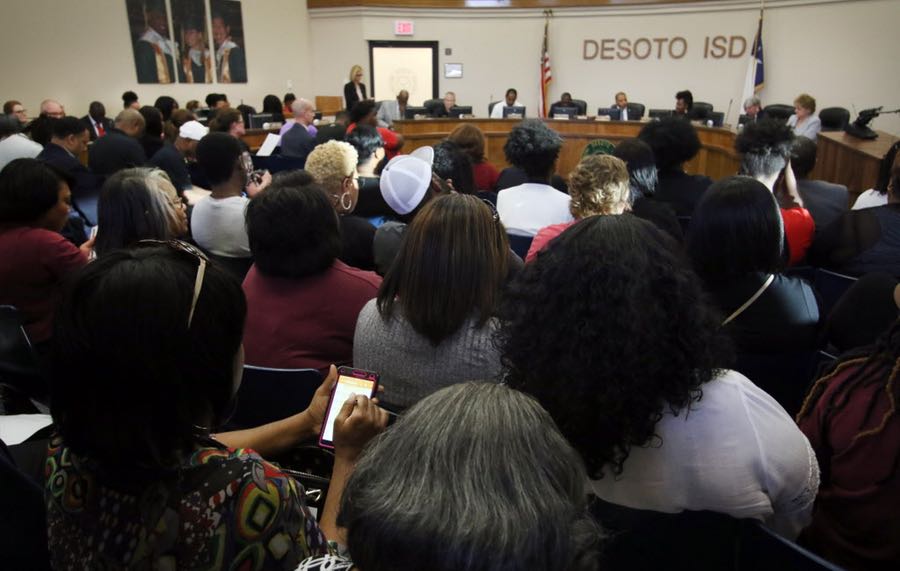 Local supporters of athletics filled the DeSoto ISD Administration Building as the board considered not renewing the contract of head football coach Todd Peterman. Under his direction, Peterman led the Eagles to a state championship last season. The DeSoto School Board had their regular scheduled meeting at DeSoto ISD Administration building located at 200 E. Beltline Road in DeSoto on April 24, 2017. (Steve Hamm/Special Contributor)The team's unofficial chaplain, Abe Cooper, told the board and the audience he hoped race wasn't a factor regarding Peterman's status at DeSoto.

"We pray that that's not the case and he will be renewed," Cooper said.

Peterman is white. In 2015-16, 80.4 percent of DeSoto's 2,440 students identified as African-American, according to a report from the Texas Education Agency.

Peterman was promoted in 2015 after seven seasons as the team's offensive coordinator. Peterman took over after former coach Claude Mathis, who is black, took an assistant position at SMU.

Former NFL linebacker Zach Orr, a DeSoto and North Texas alumnus, indicated people were originally skeptical of Peterman's hire because of his race. He said that seems to be the reason behind the potential change.

"They act like they can't handle a white man running a predominantly black football team, which is very sad," said Orr, whose three brothers also played for DeSoto. "Me, I want what's best for the kids, our youth and our community. That's what Coach Peterman is."

Orr's father, Terry, was one of the members of the public who spoke during the open session and hoped race wasn't a factor in the current situation.

Former board member Vandous Stripling said six of the board's seven members originally voted to hire Peterman. Stripling, who served from 2010 to 2016 and is running for a vacancy, said the statement regarding the race issue doesn't fit the community.

Roughly 30 to 40 football players were at the meeting in support of their head coach, according to senior Xavier Newman, a Baylor signee.

"He's just been a good role model toward me and the rest of my teammates and stuff," Newman said. "Just hearing they were going to fire him and they didn't have a logical reason to fire him, it wasn't right."