Peterman to DeSoto ISD Board: 'Tell the truth'; Eagles' coach has contract approved

DeSoto, TX - DeSoto Head Football Coach Todd Peterman had his contract for the 2017 school year approved by the DeSoto ISD board on Monday night, after weeks of uncertainty.

Peterman's status was under review by the board due to alleged UIL violations -- violations Peterman maintained from day one were not true.

"Tell the truth," Peterman said, referencing the DeSoto board. "Quote me on that. Tell the truth of what happened."

A board member told WFAA that they were looking into potential UIL violations, including recruiting, and a violation of the eight-hour limit on practice time.

Peterman says those accusations are false.

"If they had anything on me, don't you think they would've fired me?" Peterman asked. "I feel like my name has been dragged through the mud, unnecessarily. Because you have a loyal soldier to DeSoto Independent School District."

"I love the community," Peterman continued. "I love the people. I love the kids. I love the kids' parents. So I've been made to look bad for no reason, for two weeks. Because they have nothing to fire me on, so people had to speculate on what could possibly be wrong. And you know what, there's nothing wrong. We run a clean program. So that, yeah, that's a little disheartening."

WFAA filed an open records request with the UIL, and received back only one document -- a single, handwritten note that alleged recruiting, changing of players grades, and Peterman allowing players he's trying to recruit to stay at his house. The handwritten, anonymous letter came into the UIL just days before DeSoto played for the state championship last December.

"Those are comical," Peterman said. "If you read the letter in it's entirety, you know it's absolutely -- there's no truth to it. I have nothing else to say about it. It's a joke."

The letter, which was faxed to the UIL from a Fiesta Mart grocery store in Dallas, is below: 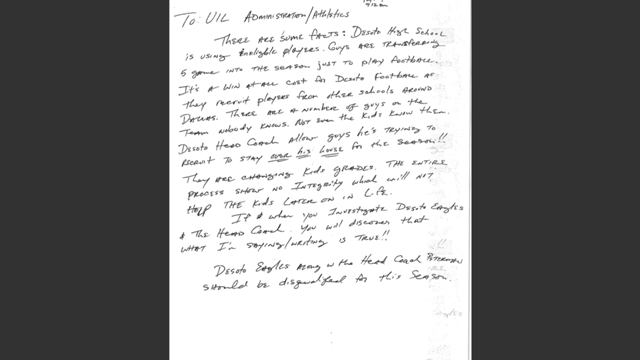 "My name will be cleared. You can quote me on that," Peterman said.

"I'm excited to get a contract renewal, and continue our work here at DeSoto High School," Peterman said. "I'm a little discouraged, because our school board didn't clear my name completely, because that's what they should have done. Because I've done nothing ethically or morally wrong in the ten years I've been here at DeSoto High School. On the field or off. So it's somewhat discouraging, yes."

Throughout the last two weeks, there have been accusations of racism within the Desoto ISD school board.  Many members of the community believe that the board wanted Peterman removed because he's a white coach at a predominantly black school.

After Monday's meeting, board member Kathy Goad told WFAA that the board was split along racial lines, 4-to-3, in their discussions of Peterman over the course of this process.

"This is the most racist board," Goad, a white woman, said afterward. "That is how I am made to feel."

Fellow board member Donald Gant, a black man, did not engage. 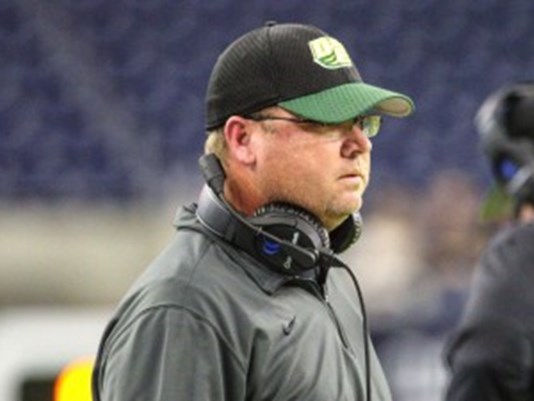 "The fact that race has been used as a proxy is absurd and deeply disappointing," board president Carl Sherman said in a statement. "Our head basketball coach, women's track coach, baseball, softball, swimming, tennis - all fantastic coaches who are also white. Race never plays a factor in our hiring decisions. Our history of diversity speaks for itself.  Our community has spoken loud and clear.  It's time to move on and focus on academics.

""It's the Superintendent's responsibility to present a slate of personnel contract recommendations to the Board for action.  The Board approved his recommendations last night."

"I'm not a board member. I'm an educator. So, where maybe this board is worried about racial politics, this coach and this coaching staff is not. We're worried about kids," he said.

Peterman's contract was renewed for one year. According to a board member, that is the standard contract length for all coaches in the DeSoto ISD.

"We live in a bubble," Peterman said. "In our bubble, race does not exist. You know what does exist? Kids education. That's the bubble we live in. I've been in the bubble for 10 years here. So it's a beautiful world where I live. We don't have to worry about anything but educating kids. That's it. Taking care of and educating kids. Our fine arts program, quote me on this, our fine arts program and our athletics program carry the school academically.

"But I don't suspect that's any different than most other schools. Most of the time the fine arts and your athletes carry the school academically. It's no different at DeSoto.