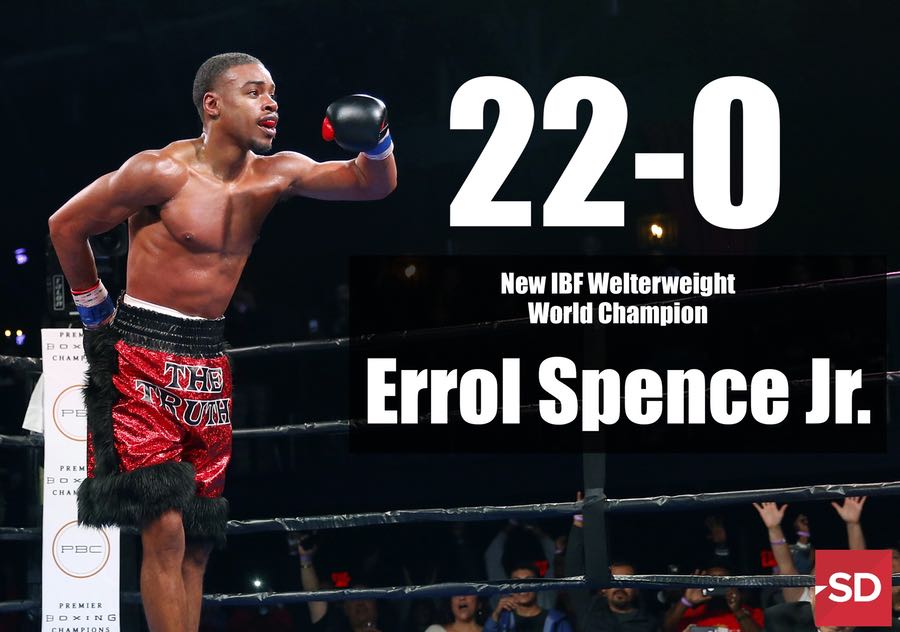 He became the third Dallas-area fighter to win a world championship, after Curtis Cokes (welterweight, 1966-69) and Quincy Taylor (middleweight, 1995-96).

"What a composed, smart performance by Errol Spence Jr.," promoter Lou DiBella tweeted. "He is the truth! This kid is something special."

Spence was leading on all three cards at the time of the stoppage.

Backed by most of the 27,000 spectators at Bramall Lane, Brook met Spence on even terms in the first eight rounds.

But Brook's left eye began to swell, and he was knocked down in the 10th round. With his left eye almost closed, he took a knee in the 11th and referee Howard Foster agreed to end the contest.

"I felt like I was behind, and I wasn't as sharp as I wanted to be," Spence said, in comments reported by Iole. "I decided to press the action and come forward more and basically break him down and press him out.

"I watched some of his fights, and he likes to fight at a certain pace. Once you pick up the pace on him, he kind of breaks down a bit and he can't throw a lot of punches. I decided to press the action, make him fight at a pace he didn't want to fight at. He started breathing hard and slowing down, and I knew I had him."

Spence said he next wants to fight Keith Thurman or Manny Pacquiao, both of whom hold welterweight titles for other organizations. The 27-year-old has said he hopes to fight someday in American Airlines Center or even AT&T Stadium.

Brook, at 36-2, lost for a second straight time after an ill-fated attempt to move up two divisions to middleweight and take on Gennady Golovkin eight months ago.