DeSoto, TX - Graduation is a milestone that the Desoto High School Class of 2017 is soaking in. It is also an especially emotional moment for April Richardson. “I’m having mixed emotions,” Richardson said.

Her son Deonte “DJ” Johnson would have been graduating with the Class of 2017, but he did not live to see this day. “I’m glad they are allowing me to walk in honor of my baby,” Richardson said. 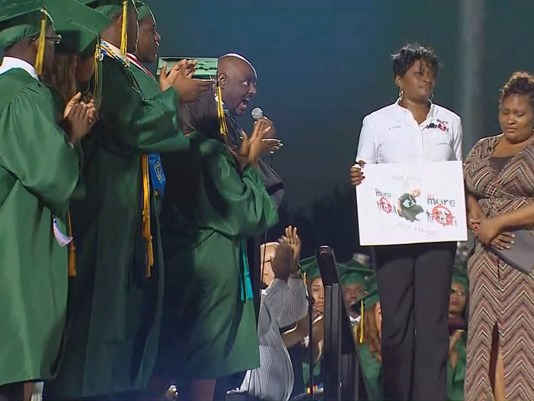 DeSoto ISD allowed Richardson to take the symbolic walk across the stage in her son’s place.

Deonte was killed in 2011, in what his family calls a senseless act of violence. The 12-year-old was walking across the parking lot at an apartment complex in DeSoto. A teenager racing in a car from a street fight ran over him. Deonte died from massive head injuries.

"I know he was going to make it, because he was different. He had a voice,” Richardson said.

For a mom who has so many dreams for her child, the graduation moment was a tough one. Eagle Stadium filled with applause as Richardson walked across the stage to accept an honorary diploma DeSoto ISD issued in Deonte’s name.

Over the years, Richardson has been finding support becoming an activist with a crime prevention group called “No More Violence.” Patricia Allen is the group’s Founder.

“I think that’s what we are trying to do,  bring awareness to get more of the community to unite as one,” Allen said.

Richardson says she was walking the graduation stage for other mothers in the same situation. And in that moment, it was another chance to channel the spirit of the son she misses so much.