DeSoto, TX - The longtime city manager of this Dallas suburb said the mayor told him to keep quiet about a fraud investigation that entangled City Councilwoman Candice Quarles.

And a former DeSoto official who discovered in 2017 that the councilwoman benefited from the fraud criticized Mayor Curtistene McCowan for keeping the details secret for more than two years. 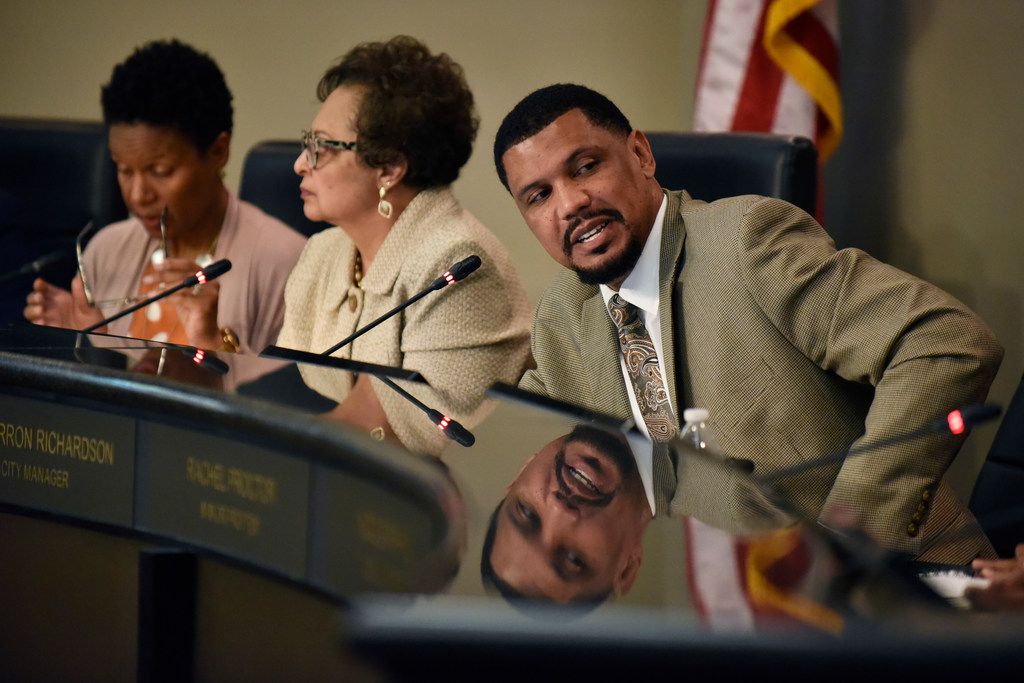 Former DeSoto city manager Tarron Richardson says Mayor Curtistene McCowan (seated left of him) told him to stay silent about the fraud investigation of former economic development chief Jeremiah Quarles and his wife, City Councilwoman Candice Quarles, factoring into his decision to quit his job. It is now known that authorities did little to examine the councilwoman's possible role, though she benefited from the fraud.(Ben Torres / Special Contributor)

“This information should have come out when Candice was running for re-election last year,’’ said Belinda May, former president of the city’s economic development corporation. “The taxpayers had a right to know. I think the mayor didn’t want the city to suffer a black eye.’’

The two former leaders' accounts, described in interviews with The Dallas Morning News, provide glimpses into steps McCowan took to muzzle details of the fraud case and block efforts to conduct a forensic audit over the past two years.

On both fronts, the mayor, noting she’s a former investigator for the Federal Trade Commission, said she recognized the importance of not compromising a probe by the Dallas County district attorney’s office and was following the wishes of prosecutors.

“I’ve had too much training on legal matters to allow them to convince me,’’ McCowan said in an interview Friday, referring to May, former City Manager Tarron Richardson and another official who wanted an audit. “They didn’t have the training. I did.’’

In July, The News disclosed that Candice Quarles benefited from husband Jeremiah's theft of at least $9,000 in tax dollars as head of the economic development corporation from 2013 to 2016. Half of the stolen funds — charged to Jeremiah Quarles' city credit card — covered personal memberships for the councilwoman.

But DeSoto police and the Dallas DA's office did little to investigate the councilwoman, even though her husband told detectives she knew about one of the illegal payments that benefited her, The News found. The councilwoman told police in a brief interview that she was unaware of the fraud.

Since the story broke, DeSoto residents have turned out to at least five government meetings asking that Candice Quarles resign and organizing a recall effort while she has remained silent. Residents also recently persuaded city officials to launch a forensic audit of spending in the economic development office and to call a town hall meeting to provide answers about how the case was handled.

During that meeting Monday, which drew more than 100 people, McCowan defended her secrecy and wanted to assure residents that she was only following the legal advice of prosecutors. “I never said I did not want a forensic audit’’ in the future, she said.

Police Chief Joe Costa detailed findings of the investigation of the couple, which he acknowledged was flawed. Neither his department nor the DA's office sought a forensic audit. He also showed spreadsheets listing about $26,000 in dubious expenses made by Jeremiah Quarles, nearly three times the amount for which he was prosecuted.

Richardson, who was DeSoto's city manager for nearly a decade, told The News that the mayor had urged him to stay quiet about the case since early 2017. That's when economic development officials discovered the theft and the invoices that were altered to remove Candice Quarles' name.

From the outset, Richardson said he urged McCowan to go public with details about “everything,’’ including the councilwoman’s financial benefits.

“I was always told not to talk about the case, even in my personal meetings with the mayor,’’ Richardson said. “It was very odd. It really bothered me professionally and ethically.’’

Richardson also wanted the city to audit Jeremiah Quarles’ spending, he said. Economic development officials had only done a rough review of those expenses.

McCowan refused to do that as well, citing the DA’s probe, Richardson said. She has said that prosecutors insisted they would do a forensic audit if they found the need.

But Richardson believed the city had a fiduciary duty to dig deeper on its own — a responsibility separate from the district attorney’s pursuit of a criminal investigation, he said.

The mayor’s suppression of the case details was one of several reasons he left DeSoto in April to head up the city of Charlottesville, Va., he said.

Richardson would not discuss his other reasons. He only said he did not “like the direction the city was headed.’’

McCowan said she was disappointed in Richardson’s criticisms of her and believes his bosses in Virginia should be concerned about his judgment.

“I was only trying to protect my city,’’ she said.

May, the former board member for the economic development corporation whose term expired last year, also pushed for the city to do its own forensic audit.

She had discovered the bogus invoices that had been altered to pay for Candice Quarles' memberships. But dozens of other expenditures over the years still needed to be thoroughly examined, she told The News.

May said the city attorney, who reports to the mayor, blocked her effort to discuss an audit with other officials, repeating McCowan’s view that the DA should handle any investigation.

"I couldn't even talk to my own board about it,'' May told The News. "What I said was that we can do our own investigation. We're a separate agency. We can bring in our own people.''

In April 2018, May and another board member pressed Candice Quarles to reimburse some of the stolen funds. The councilwoman agreed, they said.

Soon after, however, the councilwoman’s lawyer sent a letter to May demanding she drop the request because Dallas County prosecutors already were seeking reimbursements through the prosecution of her husband.

May said the prosecutors, working under then-DA Faith Johnson, were upset with her for the same reason. May said she was told to stop her efforts to retrieve the stolen funds.

May asked prosecutors to examine Candice Quarles' possible role in the fraud and was unhappy when they did not do so, she said. Misheka Nicholson, one of the prosecutors assigned to the case, told her that not enough evidence was available to bring a case against the councilwoman. Nicholson and Faith Johnson have not responded to requests for comment.

May believed there was enough evidence to take to a grand jury, an opinion shared by legal experts who reviewed the case at the request of The News.

DeSoto Police Chief Joe Costa said he also recommended that Dallas prosecutors take the case against the councilwoman to a grand jury.

Costa acknowledged that his officers could have done more to investigate Candice Quarles — a detective, for example, interviewed her for only 14 minutes. He also did not ask the councilwoman why her husband said she knew of an improper $1,200 payment to cover her chamber membership.

Costa believed the DA's office would investigate further, as it does with many other cases.

“We handled this like we do every other case,’’ Costa said. “When we handed it over to them [Dallas prosecutors], I said look, we recommend the charges be sought on Candice, and on Jeremiah.’’

The prosecutors said they would review the case and investigate, the chief said.

“It doesn’t appear that they did anything,’’ Costa said.

Last year, newly elected DA John Creuzot inherited the case but recused himself, apparently because Candice Quarles had endorsed him. He has refused to comment on the matter.

A special prosecutor in Tarrant County was appointed to handle the investigation but also did not focus on the councilwoman. That office told The News that it only had discretion to pursue a case against Jeremiah Quarles under its arrangement with Dallas County.

On Friday, the mayor declined to comment on the quality of the investigation. She also would not discuss whether Candice Quarles should step down, saying the citizens will decide her fate.

McCowan did say that she requested a private meeting with the councilwoman earlier this summer to discuss the fraud case. The meeting hasn’t happened.

“Her attorney said we’re not going to meet,’’ the mayor said.

Candice Quarles did not respond to a request for comment.