DeSoto, TX - A DeSoto City Council member’s husband pocketed more than $140,000 in misappropriated public funds when he served as chief of economic development, according to an investigative firm hired by the city to audit his spending.

The figure far exceeds previous estimates of improper payments Jeremiah Quarles is alleged to have received before he left his job in late 2016. He pleaded guilty last year to stealing $9,000 that benefited him and his wife, Councilwoman Candice Quarles, and received probation. 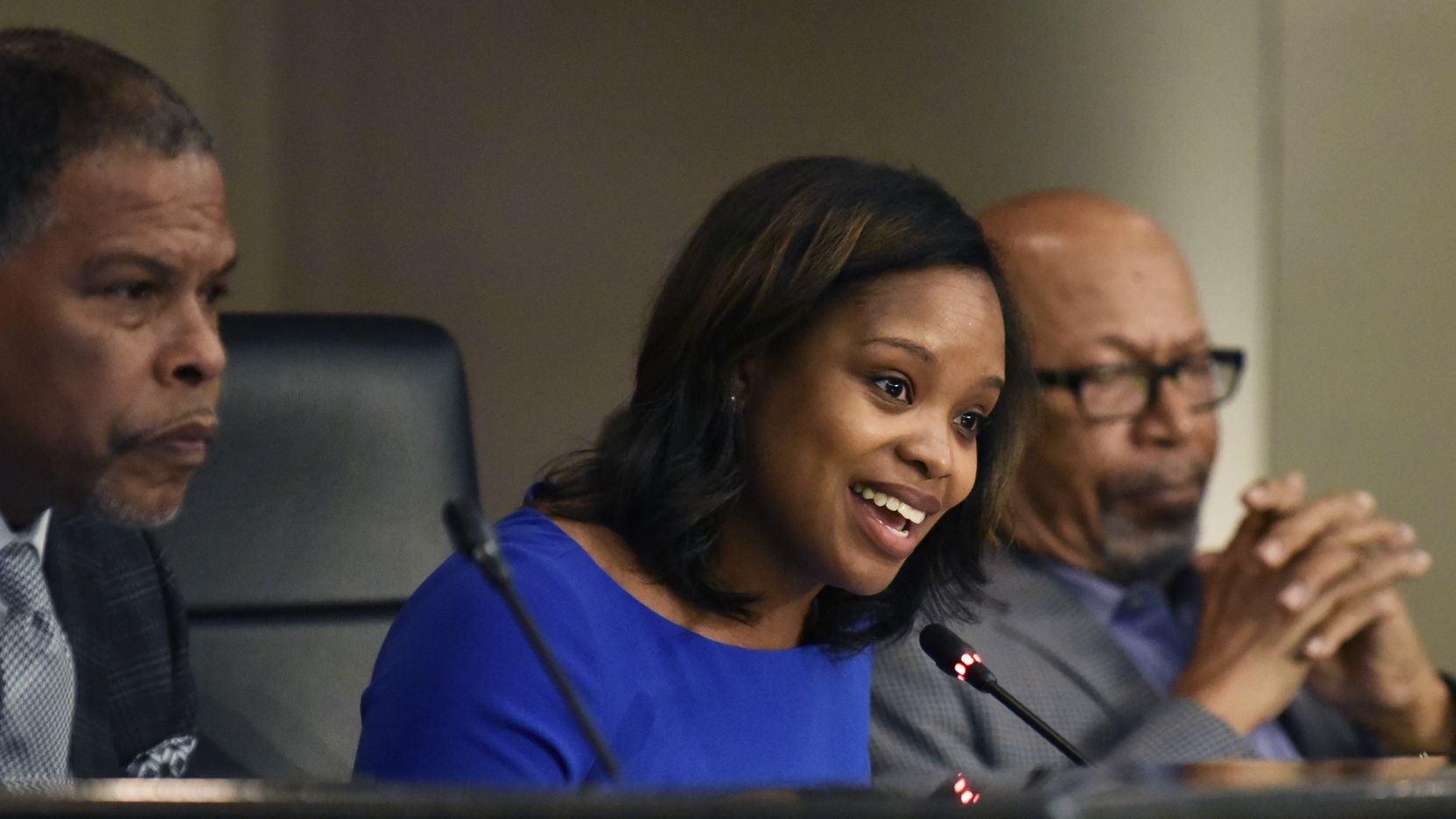 DeSoto councilwoman Candice Quarles benefited from her husband's fraud but has maintained she knew nothing about his illegal transactions.(Ben Torres / Special Contributor)

In a December briefing to DeSoto officials, investigators with Nelson Forensics & Advisory Services of Dallas disclosed that they had identified another form of self-enrichment. Jeremiah Quarles took 28 days of personal leave without informing his bosses, costing the city $13,000, they said.

He also took a $97,000 severance payment and a separate $6,900 bonus because officials did not know at the time that he had bilked public funds, according to the investigators, who asked city officials to consider trying to recover that money and other lost funds, through litigation if necessary. An additional $17,000, previously identified as questionable, was recklessly spent on fuel, lunches and travel.

The Dallas Morning News viewed a recording of the briefing, which drew little public notice nine days before Christmas. The full forensic report is expected to be discussed during a town hall meeting Thursday evening. Jeremiah and Candice Quarles, who have stayed silent during the monthslong inquiry, declined to comment for this story.

Residents of this Dallas suburb have been awaiting the results since August when they demanded city officials launch the audit. The outcry came after The News revealed that the councilwoman had profited from her husband’s fraud — a fact city officials had kept secret for two years — and that no in-depth audit had been ordered to understand the extent of the financial abuse.

The councilwoman told police she was unaware her husband had illegally purchased thousands of dollars in memberships to civic organizations for her. But legal experts have questioned how she could not have known about such large payouts on her behalf.

Residents hoping for more insight from the audit into her involvement could be disappointed.

In the briefing, the forensic experts said little about the councilwoman. Asked whether they found evidence implicating her in her husband’s wrongdoing, they said no, but cautioned that some bank records still need to be scrutinized.

Three payments Jeremiah Quarles made in 2015 were troubling, the auditors said. He used the city credit card to purchase sponsorships and other items associated with the Urban League of Greater Dallas Young Professionals, a group his wife headed for years.

The News reported in October that the councilwoman’s tweets placed her in close proximity to her husband during events or outings funded by his questionable payments, including an Urban League leadership conference.

“All sponsorships are supposed to be preauthorized by the board’’ of the economic development corporation, said Bill Brown, a former FBI agent who helped perform the investigation. “We didn’t see any indication they were preauthorized.’’

Brown did not say whether his team sought to interview potential witnesses with the Urban League or other organizations affiliated with the councilwoman that received questionable payments.

It is unclear whether DeSoto officials or board members of the corporation even directed the auditing firm to dig deep for evidence that the councilwoman knew about or participated in the fraud. The corporation’s contract with the firm is broadly written and does not contain such specific guidance, according to a copy obtained by The News.

City officials on Friday declined to answer questions from The News seeking to understand more about the audit process and findings. A spokesman said they first want to hold the town hall meeting before making comments. 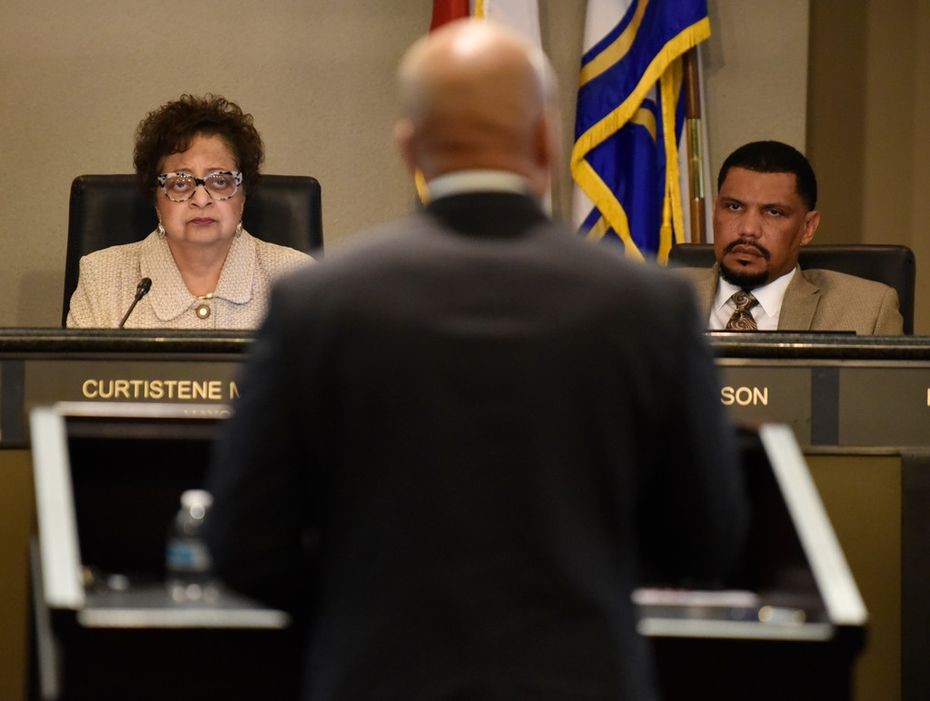 DeSoto Mayor Curtistene McCowan did not disclose to the public that councilwoman Candice Quarles had benefited from her husband's fraud. She said she was advised by law enforcement authorities not to discuss the investigation. But The News found serious flaws with the probe.(Ben Torres / Special Contributor)

Cheri Simerly, a DeSoto resident organizing an effort to recall Councilwoman Quarles, said she was frustrated after watching a recording of the briefing.

“There seemed to be little interest among city officials in getting to what the citizens of DeSoto have repeatedly said they’re most concerned about, and that’s the issue of what Candice Quarles knew,’’ Simerly said. “We’re going to have a lot of questions for the auditors and City Council members this week.’’

Simerly said she wants to know whether the auditors examined how invoices submitted to the city were altered to remove the councilwoman’s name to pay for $4,350 in Greater Dallas Chamber membership fees. Those expenditures were at the center of Jeremiah Quarles’ prosecution.

Jeremiah Quarles told police his wife knew of one expenditure, but DeSoto officers and the Dallas County district attorney’s office did little to investigate her potential role, The News found.

The auditors did not discuss the altered invoices in the briefing.

During the briefing, a city official asked auditors whether they found any communications between the Quarleses on computer hard drives or elsewhere.

Alan Nelson, who heads up the forensics firm, said some emails were retrieved but appeared innocuous — in some instances, for example, the councilwoman asked her husband to simply print out documents. Nelson provided no other details.

Brown, the former FBI agent, said he still needed to review the corporation’s bank statements, which the auditing team had requested from Wells Fargo months ago but had not yet received.

Brown also said they found “very problematic’’ credit card expenditures by an employee of the economic development corporation who briefly replaced Jeremiah Quarles. They involved at least two out-of-state trips that were not approved by the board and did not appear to have a business purpose.

“It will be most interesting to see if the audit leads to the referral of more information to law enforcement agencies,’’ Alexander said, adding that an outside agency such as the Texas Rangers should have been called in from the beginning to investigate Jeremiah Quarles’ misappropriations.

Residents Dustin and Dorothy Ann Dauenhauer, meanwhile, questioned why city officials had organized the briefing and upcoming town hall meeting amid the holiday season when many people are away or busy.

They said it’s disrespectful to the DeSoto community.

“They just haven’t given people enough notice, and few people knew about the briefing,’’ said Dorothy Ann Dauenhauer. “My guess is they want to minimize pressure from the community. Well, this town hall meeting should be the first of several dialogues.’’