It was December 2015, and Jeremiah Quarles, then head of economic development for the city, jumped at an offer to attend one hosted by the Dallas Cowboys, writing back in an email: “You know I’m there!’’

He also told the AT&T representative that his wife Candice, who at the time was on a city zoning board and five months away from winning a seat on the city council, would be accompanying him to both events.

DeSoto ethics policies prohibit officials from accepting gifts worth more than $50 to avoid improper outside influence over their public duties. The ethics rules also warn officials to avoid practices that could be perceived as a conflict of interest.

AT&T competes for major telecommunications services contracts that depend on the approval of city officials. Tickets to the two dinners each carried a $75 face value at the time, according to a Cotton Bowl official. But they also provide intangible perks, such as access to star athletes and networking opportunities. Sponsors such as AT&T often use the events to schmooze with customers.

The emails, released this week as part of a long-awaited forensic audit of the economic development corporation’s finances, adds to the growing list of personal benefits the couple received as city representatives. 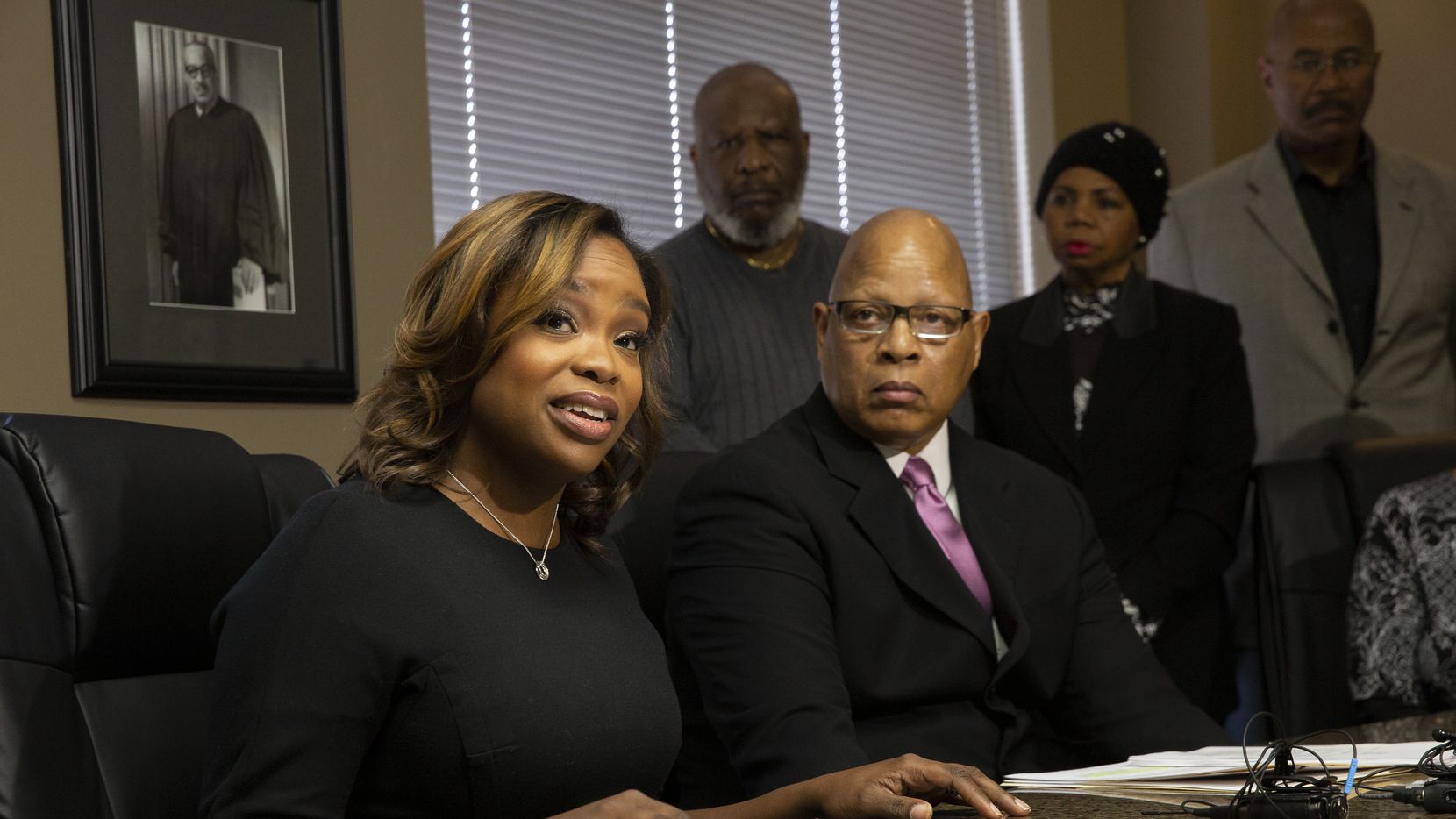 DeSoto councilwoman Candice Quarles announced in a brief press conference last week with her lawyer that she would not be stepping down, despite calls for her resignation. At right is her attorney Anthony Lyons. (Juan Figueroa/ The Dallas Morning News)(Juan Figueroa / Staff photographer)

The new finding also underscores residents’ concerns that after a four-month internal investigation they still may not know the full scope of the couples’ gains. Auditors disclosed in December that Jeremiah Quarles bilked the city of $140,000. That was far more than the $9,000 he was prosecuted for stealing last year; about $4,000 paid for his wife’s membership fees to civic organizations.

The emails show that Jeremiah Quarles accepted the AT&T tickets on behalf of the couple, which auditors highlighted as an ethics violation. It is unclear whether the couple actually attended the events. The Quarleses did not respond to requests to comment for this story.

DeSoto’s city attorney said he does not have enough information to determine whether Candice Quarles violated the city ethics policy.

But former DeSoto officials say the findings are troubling.

“It’s an embarrassment,’’ said Michael Hurtt, former mayor of DeSoto who said he turned down such gifts. “If you’re comfortable doing something like that, something is wrong and you need ethics training. If I were Candice Quarles, I would have resigned by now.’’

The audit does not shed light on one of residents’ biggest concerns: whether Candice Quarles knew about or played a role in her husband’s embezzlement of city funds several years ago.

In recent weeks, DeSoto officials have refused to answer questions from The Dallas Morning News about whether city officials even directed auditors to investigate her potential involvement by analyzing records such as her city emails or interviewing potential witnesses.

It appears they did not.

This week a spokesman said the auditors’ contract outlines the scope. The agreement is vague on that question.

"Given their extensive experience, the auditors were more than able to determine the best way to examine the records, the equipment, and the issues at hand,'' said spokesman Matt Smith.

Even though Jeremiah Quarles told DeSoto police his wife knew of one illegal credit card charge, the department’s investigators and the Dallas County district attorney office did little to investigate his wife, The News found.

The mayor also had kept the councilwoman’s gains secret for more than two years, and told the city manager to stay mum, he said.

As residents’ concerns have intensified in recent months with calls for her ouster, the councilwoman has refused to answer questions. Last week, she made her first public comments, announcing she had passed a polygraph test administered by a private examiner. She also said she would not step down, puzzling many residents.

In December, auditors informed city officials they found that Jeremiah actually had pilfered the $140,000 in public funds - tied to personal trips such as the Disney junket, a $97,000 severance package he should not have received, and other unauthorized expenses - before he left his job in December 2016. The auditors have advised the city to weigh recouping the money through legal action.

The auditors also raised concerns that Jeremiah Quarles bypassed the board by shelling out $3,000 in tax funds for sponsorships and other items tied to the Urban League of Greater Dallas Young Professionals, a group his wife headed for years.

On Monday evening DeSoto city officials are hosting a town hall meeting to discuss and answer questions about the audit’s findings.

The turnout is expected to be large, according to community leaders who say the audit’s lack of focus on the councilwoman’s potential involvement in her husband’s fraud is stunning and raises serious questions.

References to the AT&T gifts showed up in Jeremiah Quarles’ old emails. The tickets were delivered to him by an AT&T official who handled government affairs work, the auditors said.

The offers came during a week of festivities celebrating the 2015 Goodyear Cotton Bowl Classic featuring Michigan State v. Alabama. Quarles took the tickets, noting he was a Michigan State alum.

One party, at AT&T Stadium in Arlington to fete both teams, was hosted by the Dallas Cowboys and its cheerleaders.

The other event, a “Big Play luncheon’’ at the Hilton Anatole in Dallas also hosted both teams’ players and offered “a great chance to rub shoulders with some of the best in college football and take home a souvenir or two,’’ according to a Cotton Bowl website.

In emailed RSVPs to both events, Quarles said his wife would be going with him.

Five months later, shortly after she was elected to the DeSoto city council, Candice Quarles posted on Twitter that she would be interested in serving on the board of directors for AT&T or two other major corporations.

I would be open to sitting on a corporate board. ExxonMobil, ATT, SW Airlines call me. https://t.co/8yx1bcvnBi