DeSoto, TX - The use of marijuana and related products such as CBD has received a lot of attention in recent years. In some states, the local government has legalized cannabis altogether, though it remains a violation under existing federal law.

Another related issue is the disparity between the treatment of different individuals who find themselves on the wrong side of the statute, depending on where they live … and what they look like.

This enforcement was the subject of a special session of the DeSoto City Council held online on Aug.17.

The issue was brought forward by Councilmember Candice Quarles, who emphasized the disproportionate impact low-level marijuana arrests have on people of color, and how it follows them through life when dealing with issues like housing, Pell grants and employment. Quarles had invited Dallas County District Attorney John Creuzot to speak at the meeting. She said Creuzot had made policy changes at the county level, and that the DeSoto Police Department had changed their policy shortly afterward. 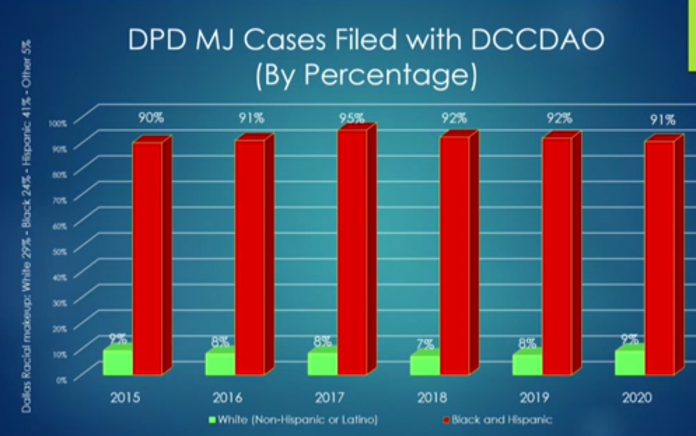 A graph presented to the DeSoto City Council by District Attorney John Creuzot shows a clear disparity in the ethnicity of those being prosecuted for marijuana offenses in Dallas. The green bars represent White (Non-Hispanic or Latino) cases, with the red bars representing Black and Hispanic cases.

“I believe we should have been a part of that conversation and this is why I’m bringing it before you now,” Quarles said. “One, for information, and two, discussion of going forward.”

Creuzot addressed the council, noting widespread use of marijuana among young people, on college campuses and even among people his own age. He said there was a shift in what was believed about the drug from his younger years watching “Dragnet,” to what is known today. For many years it was said that cannabis was a “gateway” drug.

NDG 9/3 Issue: The Forgotten Struggle and The Obligation to Better America

Citing research by researcher James Forman, Jr., Creuzot said much of the racial disparity in prosecution is the result of “pretext” traffic stops. Forman’s research found that when simply enforcing traffic laws, police tended to pull over drivers without regard to race, but when conductive investigative stops, Blacks and other minority drivers found themselves being pulled over two-and-a-half times more often.

NDG 7/13 issue: The more things change the more they stay the same

Creauzot showed the council statistics from the Dallas Police Department and the court system where from 2015 to 2020 more than 90% of marijuana cases prosecuted each year were from the Black or Hispanic communities. He also showed statistics showing that while the violent crime rate has risen, marijuana violations have been relatively stable.

From his office, Creuzot has instituted a policy of diverting low-level offenses and offering deferred adjudication. He also thanked DeSoto Police Chief Joe Costa for being the first to follow suit in his own department. Creuzot believes this policy not only saves individuals from headwinds down the road, it also helps free up the court system for more pressing matters.

In regards to the future of marijuana enforcement, Quarles says times are changing. There are

“Marijuana is changing,” Quarles said. “Attitudes around it are changing. It’s more accepted. Eleven states have some sort of legalization, and another 34 have uses like medicinal, but we’re still arresting people for it.”

She said it was significant that the state government legalized hemp in the last legislative session, saying this was a step in the right direction, and one which has been seen before. “If you look at the history of what other states have done, before they went to medicinal legalization or full legalization, they started with this,” Quarles said.