DeSoto, TX - Not even a pep talk from former Cowboys Pro Bowl linebacker DeMarcus Ware could end the losing streak for defending state champion South Oak Cliff.  A year after winning the Class 5A Division II state title, South Oak Cliff fell to 0-3 for the first time since 2016, losing to DeSoto 42-23 on Saturday night.

The good news for SOC is that it finished 9-4 that year and reached the third round of the playoffs.

Meanwhile, DeSoto (2-1) returned to looking more like the Texas powerhouse that it is than the team that got “whooped,” a week ago, as coach Claude Mathis put it after a 47-7 loss to Maryland’s St. Frances Academy. DeSoto’s defense allowed 565 yards of offense in that debacle against the No. 3-ranked team in the country, but Mathis said he was tough on his players this week, and they looked like a different team in their first game against a Texas opponent this season.

“Great bounce back for our guys. I feel really good about our offense,” Mathis said. “That was a pretty good defense that we put 42 points on, and we probably left about 21 points out there.”

Playing a Texas opponent for the first time this season, DeSoto looked much different than the team that lost by 40 a week ago.

DeSoto held SOC to 106 yards of offense in the first half in building a 14-2 lead. DeSoto three-star cornerback Caimon Mathis had the big play of the opening half, intercepting a pass at the DeSoto 2-yard line on the first possession of the game and returning it 98 yards for a touchdown on a third-and-goal play from the 8.

“They were very hard on us. They talked discipline all week and kept preaching it,” Caimon Mathis said of the DeSoto coaches. “When we’re disciplined, this is what happens. I felt like we played great, but we could be even better.”

The loss came a day after Ware, a nine-time Pro Bowler and one-time Super Bowl champion, spoke at SOC’s flashy pep rally that was put on by the NFL and the Cowboys and included the Cowboys’ cheerleaders, mascot and Rhythm & Blue Drumline. SOC will now have to hope that it can become the first team since Class 2A Mart in 2019 to lose three games and still win a state title.

It was a matchup of the two teams that have the most area top-100 recruits — South Oak Cliff with seven and DeSoto with six. DeSoto has a four-star running back in Texas pledge Tre Wisner, but he had just two carries for 11 yards in the first half, while teammate Deondrae Riden Jr. ran for 50 yards and scored on a 1-yard run, a play that gave DeSoto a 14-0 lead.

Wisner made an impact on the first drive of the third quarter, taking a screen pass 49 yards to the South Oak Cliff 2. He would then score on a 1-yard run to increase DeSoto’s lead to 21-2.

DeSoto rotates its running backs, and Riden led the way Saturday with 65 yards on 13 carries, while Wisner finished with 23 yards on seven carries. The state’s 15th-ranked 6A team also got a 73-yard touchdown run from Jaden Trawick with 3:51 remaining. 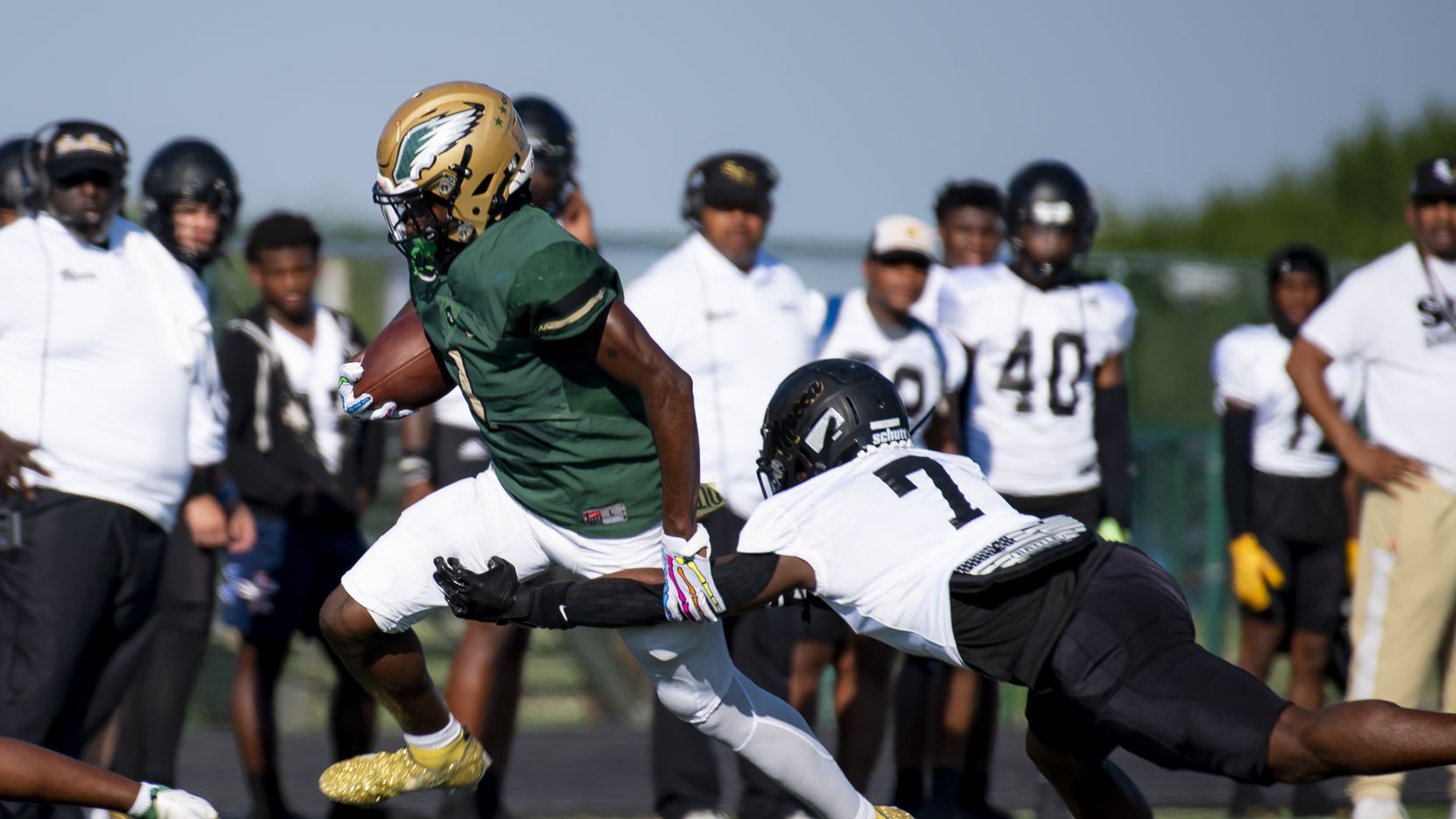 “We’ve got three great backs, and all three of them can go,” Coach Mathis said.

South Oak Cliff four-star cornerback Jayvon Thomas, a Texas A&M pledge, missed his third straight game with a hamstring injury. Todd had said before the season that Thomas would be a vital part of the running game — and that he could be “one of the top three running backs in the state of Texas” if used in the backfield — but without him, SOC has relied on Tedrick Williams and Danny Green. They combined for 181 rushing yards Saturday.

“It hurts us a lot,” Todd said of Thomas’ injury. “He is a big-time playmaker that we were counting on this year. Hopefully we will be able to get him back in the next couple of weeks. I think that would rejuvenate the whole team.”

DeSoto five-star wide receiver Johntay Cook II, a Texas pledge who is the No. 3 recruit in the area, was shut down for most of the game while being defended one-on-one by fellow UT commit Malik Muhammad. Cook finished with three catches for 40 yards, but he made a spectacular 27-yard touchdown catch that extended the lead to 35-16 with 8:16 left in the game.

Last year, in bringing Dallas ISD its first football state title since 1958, South Oak Cliff had one of the state’s best quarterbacks in Kevin Henry-Jennings, an SMU signee who threw for 3,028 yards and accounted for 49 touchdowns. So far this season, SOC has averaged just 119 yards through the air, although Tray Walton threw for 154 yards and two touchdowns Saturday.

SOC had scored a total of 15 points through its first 10 quarters this season after scoring just two points in the first half Saturday. But the offense made a breakthrough in the second half, with 21 points and 231 yards of offense.

South Oak Cliff star receivers Randy Reece and Jamyri Cauley had combined for just 11 catches for 101 yards before Saturday. Against DeSoto, Cauley had two catches for 43 yards and a touchdown and Reece caught six passes for 33 yards.