Dallas, TX - One of the most anticipated high school football matchups in Texas took place in Dallas County on Friday night between the Duncanville Panthers and the DeSoto Eagles.It was a one-sided affair as Duncanville rolled to a 41-17 victory over their rivals.

“I feel like the kids finally played like we practiced,” Duncanville head coach Reginald Samples said after the game. “One of our problems is we’ve committed a lot of penalties. And I thought we started out with a lot of penalties. Like I told them ‘once we stop getting penalties, we’re a pretty dog-gone good team.”

DeSoto got the ball to open the game and went on a nice drive that got to the Duncanville 8-yard line. However, the Eagles were unable to convert on fourth down and the ball went over to the Panthers.

On Duncanville’s first offensive play from scrimmage, Caden Durham began his big day by turning the corner and racing 92 yards for the score.

Both teams started making defensive stops from that point, keeping the game a 7-0 score after the first quarter.

Much like in the first quarter, the Eagles were on a drive and appeared to be on the verge of scoring, but again the Panthers' defense stood tall on fourth down and forced a turnover-on-downs.

Four plays later, Durham found the hole up the middle and raced untouched 84 yards to pay dirt. A missed extra point kept the score 13-0. Duncanville dominated the rest of the first half, and Durham scored twice more, from 11 yards and 54 yards respectively, to bring the halftime score to 27-0.

DeSoto finally mustered a response in the third quarter after forcing the Panthers to punt. Angel Diaz kicked a 33-yard field goal to get the Eagles on the board at 27-3. Then, on the ensuing drive, Duncanville fumbled and DeSoto recovered, giving them excellent field position.

Two plays later, Deondrae Riden, Jr. plowed his way into the end zone from 2 yards out to cut the deficit to 27-10 after three quarters.

Riden was the star for DeSoto in the game, collecting 73 yards on 18 carries and a touchdown.

However, the Panthers would not be denied. Durham capped off his game with one last touchdown on fourth-and-goal from the 2-yard line.

After getting another defensive stop, Nehemiah Borner checked in at running back and scored one last time from 6 yards out.

DeSoto managed one last score late, but it was too little too late and Duncanville walked away with a 41-17 win and a district title.

“We’ve felt like, all along, once we get our offensive line blocking, we’re going to be a different team,” Samples said. “What I’ve told them is that they block against one of the better defenses in the state, every day in practice. So they just needed to have that confidence, versus someone else. Tonight, I think they believed what I said.” 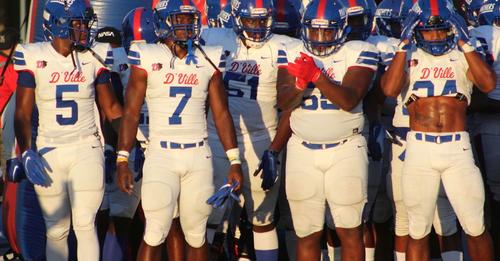