Jessie and his peers were honored for their accomplishments both on and off the field on April 10 at the Dallas / Addison Marriott Quorum. Jessie has accepted a Texas Christian University Community Scholars scholarship for a full ride.

“Mr. Jessie joins an impressive group of young men, not only on the field competitively but also as scholars and young community leaders,” stated Dr. David Harris, DeSoto ISD Superintendent of Schools. “These men inspire future student-athletes to excel in the classroom and become more involved in their communities.”

The selection committee, comprised of coaches, teachers, administrators and business leaders from North Texas, evaluated the college and high school candidates based on their athletic accomplishments, academic performance and leadership in the community. The high school honorees will enroll in the fall at a prestigious list of institutions, including Ivy League schools, state universities and the service academies.

A number of scholarships were awarded, and one high school player was named the club’s top scholar-athlete. In addition to the scholar-athletes, the event featured new University of North Texas head football coach Seth Littrell as the keynote speaker and Award-winning sportscaster Scott Murray as the evening's emcee for the eighth consecutive year. 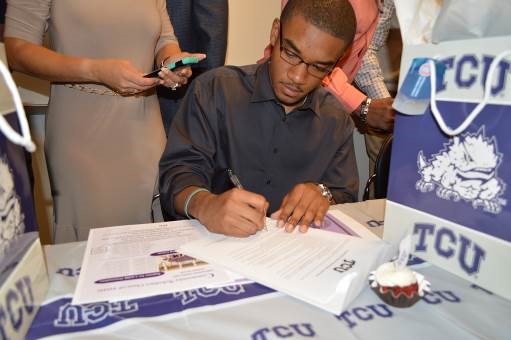