DeSoto, TX - Misappropriated funds, abuse of the district’s credit card program, and decisions made by past DeSoto ISD leadership are some of the reasons for the district’s poor financial health according to an 18-page final report by the Texas Education Agency.

Along with its findings, TEA also outlined recommendations for the district to appoint a conservator to oversee the district.

Thursday night at 6 p.m. the district is holding a virtual hearing in regards to the final report. People who pre-register will have a chance to weigh in.

The investigation into DISD stemmed from complaints in 2018 and allegations of wrongdoing by the former superintendent, David Harris Ph.D., and his administration.

According to the report, which was released last Friday, TEA launched a Special Accreditation Investigation into DISD earlier this year. The district contracted an auditing firm, Weaver and Tidwell, L.L.P., to investigate the fiscal years 2014-2019 and find out why the district was in financial trouble.

Based on that information and review, the TEA’s final report states, “Financial mismanagement along with the decisions made by Dr. David Harris, former DISD Superintendent, his administration, and actions taken by the Board, have led to an incurred deficit of $21.6 million. The District’s General Fund, Debt Service Fund and Capital Projects Fund were impacted due to deliberate financial and accounting decisions.”

The report states former DISD employees could face a potential criminal investigation for approving 50 credit card transactions in the amount of $330,000 to “three fictitious vendors which the internal employees created.” 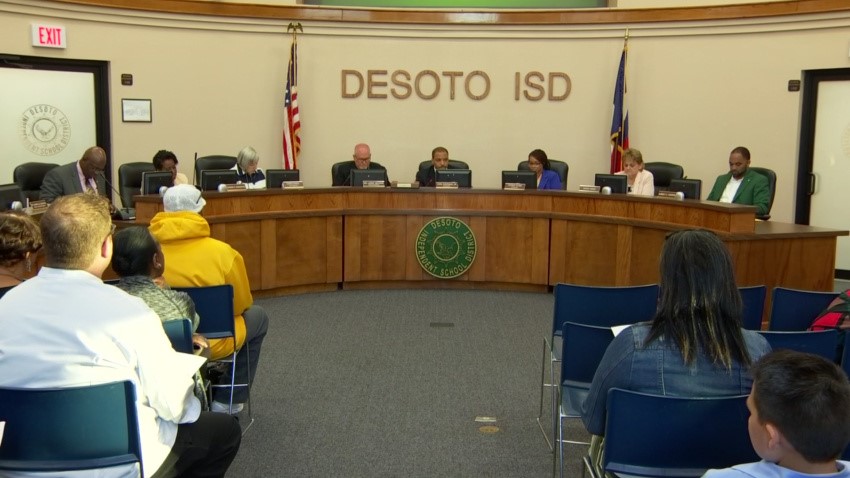 According to the audit, prior to fiscal year 2014, credit card expenses were less than $3,000 a month, but jumped to $35,000 during the former superintendent’s tenure. The report claims spending limits were non-existent.

Part of the report findings also claim the board overspent on the plans for Katherine Johnson Technology Magnet Academy (KJTMA). The report states in 2015 the school was estimated to cost $20 million bond insurance, for a 74,000 square foot facility on a site already equipped with infrastructure needs.

TEA’s report said the following year the school board approved a bond issuance for $31.8 million for an 117,000 square foot facility to hold 900 students.

They approved the new school plus $2.9 million on top of that to construct the project in another location that needed additional infrastructure, according to audit.

The report concludes that in 2018 the school only met 60% capacity for the design capacity. It also claims the district could have saved up to $12 million if they used the smaller blueprint and if the school was built on the original Glen Heights site.

In 2018 former superintendent David Harris, Ph.D., was “relieved” of his duties after the board voted unanimously for his leave. At the time, the district said he had been placed on leave for "concerns regarding the duties and performance of the superintendent.”

In the final report, TEA states DISD has argued it should not be held accountable for the actions of previous Board members and administrators who are no longer employed by the district.

“Although TEA acknowledges that the majority of the DISD Board of Trustees are new Trustees, the same two Trustees from the previous Board hold leadership roles as President and Vice-President,” the report stated.

DISD said in a statement that under its new leadership, they’ve been proactive in addressing concerns brought up by TEA.

The district said its current Board of Trustess and Superintendent, D’Andre J. Weaver, Ph.D., have implemented new guidelines including recalling all employee-issued credit cards. There’s currently, “a more rigorous process for purchasing and travel approvals.”

In July the board approved Don Hooper as the district’s conservator in response to the state’s preliminary report.

In 2018-2019 school year the district also received an ‘F’ from the state’s School Financial Integrity Rating System of Texas (FIRST). According to DISD, they were notified this month it’s been raised to a ‘C’ “as a result of the district taking action and making some difficult decisions.”

Last year the district cut nearly 100 teachers and staff and closed Northside Elementary School to save money and make up for the deficit.