AUSTIN, Texas — Tiffany Jackson, a former standout at the University of Texas who was the No. 5 pick in the WNBA draft in 2007 and played nine years in the league, has died of cancer, the school announced. She was 37.

Jackson, who was first diagnosed with breast cancer in 2015, died Monday. She was hired as head coach at Wiley College in April and was preparing for her first season with the team.

"We were extremely saddened at the passing of Coach Jackson, she was an incredible light for our students and an amazing member of the Wiley College family. Her dedication to Wiley College was evident in how she interacted with the students and her community. She will be sorely missed. We are praying for her family and friends," said Wiley College President and CEO Herman J. Felton, Jr.

"Coach Jackson became a valued member of the Wildcat family the day she stepped on campus," said Bruce Peifer, Wiley College associate vice president of athletics. "She greatly impacted the lives of our young ladies. We send our thoughts and prayers to her family and friends." 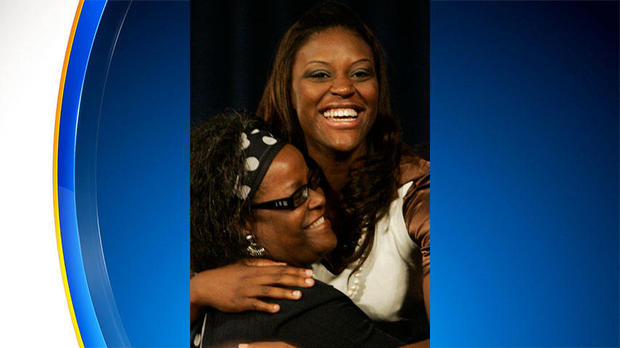 Texas forward Tiffany Jackson, right, hugs her mom, Josephine, after being picked fifth by New York Liberty in the first round of the 2007 WNBA Draft, Wednesday, April 4, 2007, in Cleveland.

Jackson was a three-time All-Big 12 selection and was voted the national freshman of the year by the U.S Basketball Writers Association in 2004. She finished her Texas career ranked in the top five in career points, rebounds and steals. She is the only Longhorns player to reach 1,000 points, 1,000 rebounds, 300 steals and 150 blocks in a career.

"Tiffany had a great career and was an impact player," former Texas coach Jody Conradt said. "She was recognized for her all-around game and the fact that she was tremendously mobile and could play multiple positions. She was beloved by teammates, and we share in the sadness of her passing."

Jackson was drafted by the WNBA's New York Liberty. She also played for the Tulsa Shock and the Los Angeles Sparks. Her best pro season came in 2011 with Tulsa when she averaged 12.4 points and 8.4 rebounds.

After her cancer diagnosis, Jackson managed to return to the court to play a final season with Los Angeles in 2017 before retiring at age 32. She was an assistant coach at Texas for two seasons.

"We are deeply saddened to hear the news of the passing of Tiffany Jackson, one of the greatest players in the history of Texas women's basketball," Texas coach Vic Schaefer said. "I know she was so excited to be the head coach at Wiley College for the upcoming season. She will be sorely missed by so many. Our deepest sympathies go out to her family."

Prior to her college career, Jackson played basketball at Duncanville High School, where she was a McDonald's All-American and a WBCA All-American, and was the consensus No. 2 national prospect.

She was a member of Duncanville's 2003 State Championship Team and was the state of Texas' Gatorade Player of the Year. Jackson was inducted into the Duncanville ISD Athletics Hall of Honor in 2017.

"Tiffany Jackson was an amazing mother, daughter, friend, teammate and role model for so many," said DHS head girls basketball coach LaJeanna Howard. Howard grew up playing basketball with Jackson in Duncanville ISD - they even played together on the 2003 Duncanville Girls Basketball State Championship team.

Duncanville ISD said Jackson made it a habit to give back to the Panther community.

"She would go to schools to speak and give our young girls nuggets of wisdom that they could carry with them through a lifetime," Howard said.

Jackson would also show her support for the Pantherettes by going to playoff games and tournaments.

"She will be dearly missed throughout the community," Howard said.

"Duncanville ISD is truly honored to call Tiffany Jackson a Panther. She was a shining example of servant leadership, and we are proud of who she was and what she accomplished," said Superintendent Dr. Marc Smith. "Our prayers are with the Jackson family during this time."

Jackson is remembered by Dallas Mayor Eric Johnson as someone who lit up a room.