Duncanville, TX - Debra Wilson trusted Parkland Memorial Hospital. She was born there; her three babies were born there. She received fine, low-cost treatment for her diabetes and heart problems there. In 2007, doctors there saved her life.

But in September 2014, at 58, Wilson walked into an exam room at Parkland and everything changed.

A doctor asked Wilson whether she knew there was a catheter inside her, Wilson said. It was lodged in her aorta, the body’s primary artery.

Wilson replied that there was something in her heart, but she understood it was a stent. That’s what a doctor told her a few weeks before, she said, that someone intentionally left a small tube inside her to keep blood flowing to her heart.

“That is not a stent, Mrs. Wilson,” the doctor said. “That is a broken-off piece of catheter tube that was left in your aorta in 2007.”

For seven years, Wilson had no idea that an 8-inch-long piece of plastic tube was mistakenly left in her, she has claimed in a suit against the hospital.

It’s unclear when Parkland doctors realized the broken catheter was there, though it was first visible on a November 2007 X-ray, hospital records show.

Debra Wilson says she can’t trust her doctors at Parkland anymore because she believes they hid information from her. (Jae S. Lee/ Staff)

Wilson had 22 chest X-rays between the time of her surgery and the time she found out about the catheter, she said.

Three experts who reviewed Wilson’s hospital records for The Dallas Morning News said that if, in fact, the hospital failed to disclose the catheter to Wilson for seven years, it violated commonly accepted ethical disclosure guidelines and compounded its initial mistake.

“It’s really puzzling,” said Dr. Steve Kraman, a medical ethics expert at the University of Kentucky. “I could almost see if nobody saw it happen and there was no tangible evidence thinking, ‘If I shut up it’ll go away.’ But in a case like this, the smoking gun is sitting right there in her aorta to be seen by anybody who does her X-ray for the rest of her life.”

In 2014, Parkland doctors told Wilson about the catheter. By then, it had calcified and moved, posing a potentially life-threatening danger. Wilson was put on blood-thinning medications, which also carry significant risks.

Now, she might have to live with the catheter for the rest of her life because there may be no safe way to remove it.

Parkland declined to comment on Wilson’s case because of her pending lawsuit. But the hospital is fighting her suit in court and has denied responsibility.

The case comes at a concerning time. Parkland is three years into a five-year federal oversight agreement for endangering patients.

The public hospital has worked to adopt stronger disclosure protocols. A September 2014 policy calls for notifying the patient or the patient’s family “as soon as possible or within 24 hours” after discovering a “clinically significant” mistake.

The policy says disclosure is “the right thing to do,” fulfills the hospital’s duty to keep patients informed and “helps maintain the public trust.”

Parkland’s policy in 2007 was similar but less thorough. It required medical staff to inform the patient or family about mistakes but gave no time frame. Failing to report errors to supervisors by the end of a shift could result in disciplinary action.

When did doctors know?

Sitting on a brown couch in their Duncanville living room recently, Wilson and her husband, Charlie Wilson, looked deflated as they recalled their ordeal. On top of the stress of health issues — she needs help walking, standing and sometimes breathing — they both feel traumatized. They fear that Wilson’s doctors don’t want to help her, don’t care about her.

The ordeal began in October 2007 when Wilson’s legs suddenly gave out and she slid to the floor. Her husband took her to Parkland with severe heart problems. She was hospitalized until January 2008.

During that time, Parkland performed procedures that “absolutely” saved Wilson’s life, said Dr. Lachlan Forrow, a Harvard medical professor and ethics director at Beth Israel Deaconess Medical Center in Boston. But the catheter piece also ended up in her aorta.

It’s unclear when doctors realized the error. A doctor wrote in September 2012 that the “20 cm long fragment of plastic tubing is present in the aorta” and described it as having moved higher in her body “than on examination of November 2007.”

In October 2012, doctors wrote in Wilson’s medical records that they were discussing what to do about the catheter piece. A resident doctor in his first year out of medical school wrote that he called a resident with just one more year of training.

“They want to leave the tubing in for now as they think they might end up giving infections to her” by removing it, he wrote.

Kraman said the medical decision to leave the tube in may have been reasonable if removing it was determined to be too risky. But there’s no excuse not to make sure the patient was aware of the issue, he said. And Kraman said it was concerning that the resident didn’t document talking to his attending physician.

Wilson said she couldn’t get any answers about what happened or any plans to address it medically. Doctors and nurses brushed off her questions, she said. So she filed a complaint with Parkland’s patient advocate.

“We regret your visit with us did not meet your expectations,” wrote an advocate in September 2014. The advocate promised to investigate what happened and reply within 50 days. “Your concerns regarding the tubing left in your aorta are being shared with the appropriate managers for review.”

Two months later, Wilson still hadn’t heard from the hospital. So she reached out again, and got another letter, on Dec. 15, 2014, with much of the same language as the first letter. This time, it promised to follow-up after a review that could take “several weeks.”

She went to attorney Brad Kizzia, who filed a lawsuit and eventually got some of Wilson’s medical records. That’s how Wilson says she learned what she knows about her treatment.

Now, Wilson says she’s speaking out because she doesn’t want anyone else to be tormented.

“Obviously, I am concerned about my situation, but I am also concerned about other patients there because Parkland refuses to be held accountable,” she wrote last month to Dallas County Commissioner John Wiley Price.

Wilson’s case is a relic in medicine, said Dr. Howard Brody, a medical ethics expert at the University of Texas Medical Branch in Galveston.

“It’s sad when you know a better way of doing things and you still see people doing things the old way,” Brody said.

Until the 1990s, Brody said, the conventional wisdom among doctors was to keep mistakes secret to avoid shame, ridicule and malpractice lawsuits.

That’s no longer accepted practice. Not only is the new standard more ethical, experts said, but hospitals have actually seen lawsuits drop after starting to disclose errors, apologize and compensate families.

“Unequivocally, there is no good reason in the 21st century for a hospital in the United States not to be fully transparent with every patient about what happened in their health care,” said Harvard’s Forrow.

In legal filings, Parkland hasn’t stated when staff first discovered the catheter inside Wilson. But it asserts Wilson hasn’t provided facts to support her claim that the hospital knew about it in 2007.

The hospital accused Wilson of “engaging in a play on the facts” in a March 14 pleading and emphasized her “inability to point to any individual who was aware of a retained catheter fragment in 2007.”

Parkland also argues that Wilson’s suit should be thrown out because she missed the legal deadline to notify Parkland of her injury within six months of it occurring.

“She couldn’t tell them about something that she didn’t know about, that they knew about and withheld from her,” said Wilson’s lawyer, Brad Kizzia.

Every time Wilson visited Parkland, she was given a patients’ rights form. It promised her the right to information to make “informed decisions” about her treatment and the “right to timely access” to her medical records. Wilson called it a meaningless piece of paper.

“All I see is they have a nice new building and that’s it,” Wilson said. “Just do the right thing. You say the patients have rights, so do what’s right by them. Own up to what you did and fix it.” 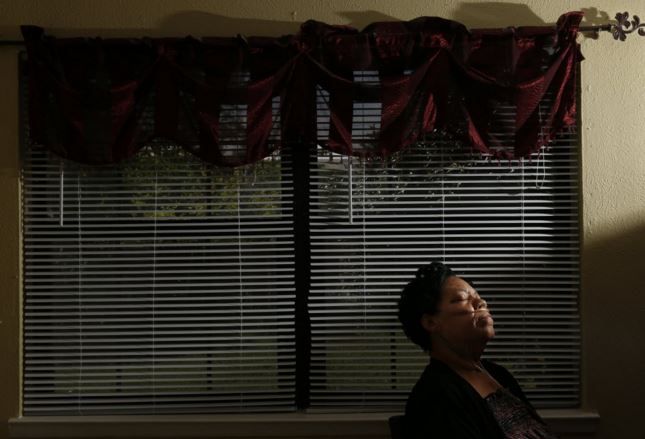 Debra Wilson uses an oxygen tank to help her breathe at her home in Duncanville on April 7. She says Parkland doctors accidentally left an 8-inch catheter inside her body and didn’t tell her about it for seven years.