Duncanville, TX - When Oliver Aguilar’s daughter told him she wanted to work on cars, it “kind of broke my heart,” he said.

“She could probably write her own ticket in college with soccer.”

Instead, 18-year-old Brianna Aguilar wanted to see what’s under the hood.

So she does, as one of about a dozen female students who take automotive technology courses at Duncanville High School.

“There are women [in the automotive industry], but they mostly work in the front office,” Brianna Aguilar said. “I want to be in the back and work on engines.”

She learned by following her dad, a claims adjuster, when he went out on calls. Her uncles used to take her to Yello Belly Drag Strip in Grand Prairie. She also did a fair amount of self-teaching.

“It needs a lot of work,” she said of the Civic. “The transmission’s slipping.”

Her skills have earned the attention of professionals. When she turned 18 in December, Young Chevrolet in East Dallas hired Aguilar to work part time in its oil and lube department, where she changes oil and mounts and rotates tires.

“I was truly surprised when she came in, but she runs with the big boys,” said service director Stephen Ellason. “She’s very good at following instructions and taking initiative. She’s not afraid to learn, and there are some things she still needs to learn.”

The job isn’t just a lark for Aguilar. She also applied to Pep Boys along with Honda, Ford and Chevy dealerships near her home. Only Pep Boys expressed interest, she said.

“They treat me just like one of them,” Aguilar said of Young. “They said, ‘You wanna do this? This is what you signed up for.’ ”

A small percentage of automotive shops are run by women, said Donny Seyfer, chairman of the Automotive Service Association, a nonprofit that represents car service centers.

“I work with several women, and I teach a few, too,” he said. “It’s not common, but it’s growing, and in a lot of ways it’s an industry that has some fields that women are uniquely qualified for.”

Tim Odom, an automotive instructor at Duncanville, said women can be natural mechanics.

“They want to be here. They want to do something new,” he said. “They are quick studies and are more into the minutiae of how it works than how it looks or how it sounds.”

Odom and fellow instructor Johnny Burkett said they hope that one day enough girls enroll in auto tech courses so they can have a class to themselves. They are about three or four students short of that goal, Odom said. About 12 of their 160 students are female this year. The number fluctuates each year.

Near the end of one recent three-hour course in Duncanville’s automotive garage, Brianna and two other women worked on changing the battery in a teacher-owned Ford Focus. They also spent time changing an air filter in a truck donated by a student.

Beltran learned from her father, she said.

“I really like working on engines,” she said. “They are a little more complicated because you don’t realize how many little things are in your way until you can get at what you need to fix.”

On the other side of the room, a group of boys stood around the shells of ancient vehicles.

Junior Nathan Mosqueda said his female classmates are no different from the male.

“They pick up on things pretty fast.”

“They have quick hands that can fit into tiny spaces better than we can,” he said.

At this shop, there’s no hazing, Odom said.

“Nobody asks you to go bring them some muffler ball bearings or to find the flux capacitor,” he said.

And the girls are not intimidated by how cars work, Burkett said.

Oliver Aguilar, Brianna’s father, thinks there might be something larger at play than just a girl discovering a love for cars.

“She’s the kind of person who, if you tell her she can’t do something, she’ll prove you wrong,” he said. “She just went into this for the love of vehicles. As far as empowering more women to follow her, I don’t think she realizes the impact of what she’s doing yet.”

Ellason said he plans to make Brianna a full-time employee once she graduates on May 31. Currently, she works in Young’s standalone oil change center and has a chance to move into the full-service department.

“We tend to start all of our kids there, and you learn a whole lot about whether they are really interested in auto service or if they just need a paycheck,” he said. “She’s a kid, and she’s going to be good at whatever she does. But she has a great drive for mechanics, and I just can’t say enough good things about her.”

She also might pursue something else, her father said.

“She kind of came up to me the other day and kind of whispered, ‘Hey, dad … I think I might want to play soccer again.’ ” 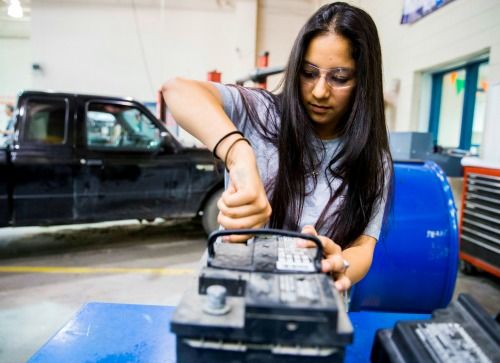