Van Zandt County, TX - Two people are dead and two are in critical condition after a crash in Van Zandt County Sunday afternoon, according to DPS officials. Just before 4:30 p.m., Susan Sherrard, 66, of Mabank was traveling south on HWY 198 when her car went off the ride side of the road. It is unknown why she lost control.

The car hit several trees and she was taken to the hospital. 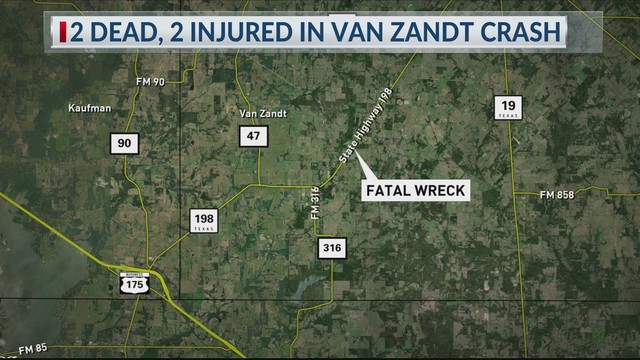 William Fredrick Sherrard, 39, of Mabank was pronounced dead as well and was riding in the back seat of the car. He was not wearing a seatbelt.

Thomas Eugene Bickerstaff Jr., 65, of Duncanville was also killed. He was sitting in the passenger seat.

Lisa May Adair, 39, of Mabank was transported to CHRISTUS Mother Francis Hospital in Tyler in serious condition. Adair was also not wearing a seatbelt.

The crash remains under investigation.

According to TxDOT, wearing a seat belt reduces the risk of dying in a crash by 45 percent in a passenger vehicle and up to 60 percent in a pickup truck.

The agency's annual "Click It or Ticket" campaign hopes to bring those numbers down.