Duncanville, TX - The door to Amy Wuzwuz’s office is still broken.  The case once filled with CBD products is still not fully restocked.  “We were scared that they might just come back,” she said.

Wazwaz, the owner of GM Tobacco shops in Duncanville and Lancaster, estimates she lost $100,000 in cash and assets, not to thieves, but to the Duncanville Police Department, who raided her shops in March. 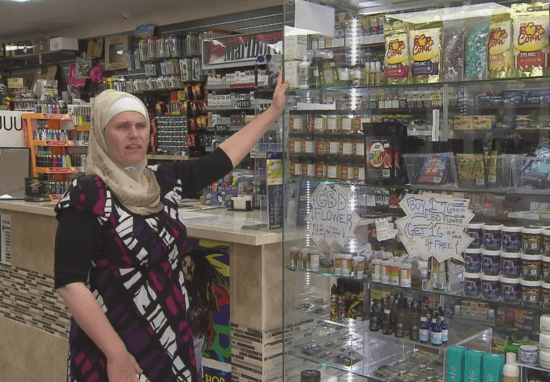 “Anything that was CBD they took claiming it was marijuana,” said Wazwaz. “They took all the cell phones from everyone in the store, including my younger son. And they took even the money from the employees in their pockets at the time.”

The narcotics case that search warrants show police were pursuing, though, seems to be falling apart.

The very day officers executed warrants, citing the Texas Controlled Substances Act to establish CBD was illegal to possess or sell, the state removed hemp, which is used to make CBD oil, from its list of controlled substances.

State legislators have since passed a law establishing hemp-derived CBD as legal.

Three months later, there have been no arrests and no charges in the case.

In a statement to CBS11, the Dallas County District Attorney’s Office said, “While police did not actually file any case, we indicated we would not prosecute these materials as marijuana.”

Duncanville Police also filed a civil forfeiture case to be able to keep $11,841 in cash and two handguns seized in the raid, but a judge dismissed that case in April at the request of prosecutors.

The police department maintains, though, it still has a “current and ongoing investigation.”

A city spokesperson wrote CBS11 on their behalf, “Evidence seized will be retained until completion of the investigatory process.”

“I’m not sure what the police department is investigating here,” said civil appeals attorney, Chad Ruback. “The fact that they dropped the civil forfeiture case that’s a much, much lower standard doesn’t bode well for the criminal case, to the extent that there ever will be a criminal case and at this point that’s doubtful.”

Ruback says the only way to check police authority and force them to return your possessions is to sue them and win in civil court. Otherwise, he says, “As long as the police can say with a straight face, we’re doing an investigation, they can keep the stuff,” said Ruback.