ARLINGTON — As Duncanville’s wide receivers posed for pictures with their position group Saturday night after crushing one of their biggest rivals, they proclaimed that they are the best in Texas.

They made a convincing argument at Globe Life Park, as one of them hurdled a defender on a crazy touchdown play and two others combined for 367 receiving yards.

Duncanville is one step closer to its first state championship since 1998 and possibly a chance to avenge losses to North Shore in the past two state title games.

Led by a huge game from SMU signee Roderick Daniels Jr., Duncanville amassed 520 yards of offense — 471 through the air — and routed DeSoto 56-28 in the Class 6A Division I Region II final. Daniels, a three-star recruit who said he gets disrespected at times because he’s only 5-9, had eight catches for a season-high 267 yards and a touchdown.

“It’s not the size, it’s the heart and the body,” Daniels said. “I’m 5-9, but I’ve got the heart of a 7-foot lion. It’s going to take more than one person to tackle me. When coach gives me my chance to make plays, I’m going to be a playmaker.”

Duncanville still has to beat Southlake Carroll in next week’s state semifinal to reach its third straight state championship game. But Daniels was asked if wants a state final rematch with Galena Park North Shore, the team that handed Duncanville back-to-back losses in the 2018 and 2019 title games — including the now-legendary 2018 game that North Shore won 41-36 on a 45-yard Hail Mary touchdown pass on the final play. 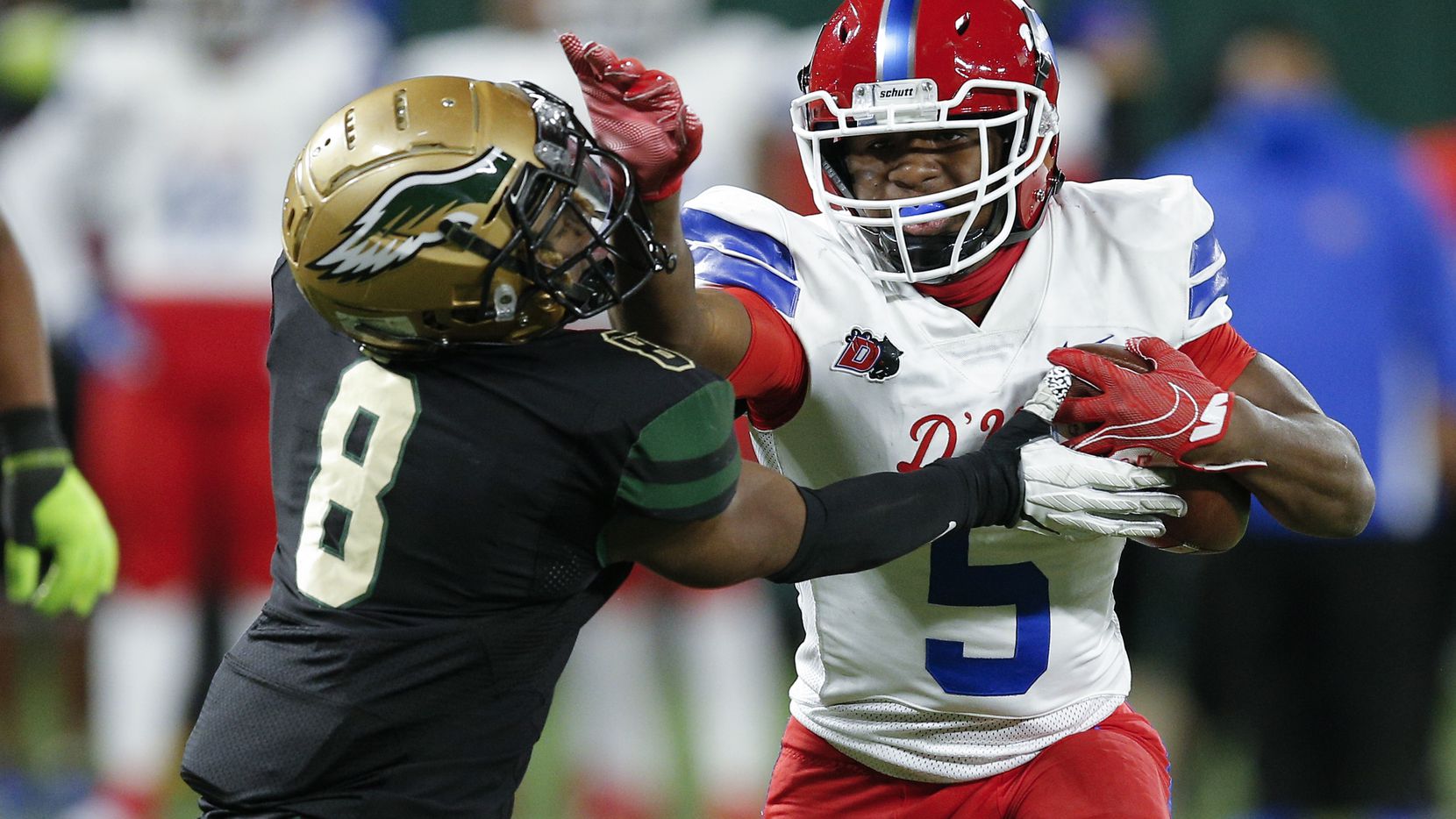 Duncanville put the game away on the wildest play of the game. Wide receiver Lontrell Turner caught a pass from Grayson James, hurdled a DeSoto defender on his way to a 51-yard gain, fumbled near the goal line and Duncanville receiver Chris Hicks Jr. recovered in the end zone for a touchdown that gave Duncanville a 42-21 lead with 5:57 remaining.

“In my mind I was thinking it’s me and you, I’ve got to make you miss,” said Turner, who had six catches for 92 yards and a touchdown.

Turner said he wasn’t inspired by Alabama running back Najee Harris. Turner said he hasn’t even seen the highlights of Harris hurdling a Notre Dame defender in the College Football Playoff semifinal Friday at AT&T Stadium.

Daniels had receptions of 44, 53, 44, 71 and 33 yards, using his blazing speed and toughness to break free for a lot of extra yards after the catch. But perhaps his most incredible play was on a punt return in the fourth quarter with Duncanville clinging to a 35-21 lead.

Daniels was stripped of the ball, which bounced halfway across the field, but Daniels outsprinted everyone to pick it up, and he still turned it into a 10-yard gain. Duncanville scored a touchdown three plays later.

“Once he catches it, he knows what to do with it,” Duncanville coach Reginald Samples said. “He is more special as a person than he is as a football player, and that’s saying a lot.”

James, who was playing in the rivalry for the first time after transferring from Plano John Paul II to Duncanville in the offseason, threw for three touchdowns and a season-high 471 yards while averaging 21 yards per completion. Hicks also had a big game for the Duncanville receiving corps, finishing with five catches for 100 yards and a touchdown.

“It was definitely a big-time game. Leading up all week we just talked about staying level-headed,” said James, who completed 22 of 28 passes.

That was needed in an emotionally charged game between longtime rivals. The teams combined for 16 penalties for 140 yards.

Duncanville (10-1), ranked No. 7 nationally by MaxPreps, will play eight-time state champion and 25th-ranked Southlake Carroll in next week’s state semifinal at 3 p.m. Saturday at Globe Life Park. Duncanville beat Carroll in regional finals the last two years, but Carroll five-star quarterback Quinn Ewers — the No. 1 recruit in the nation in the Class of 2022 — is coming off an extraordinary game Saturday in which he threw for 450 yards and six touchdowns on 35 of 39 passing in a 59-35 win over Euless Trinity.

Duncanville, trying to win its first state championship since 1998, is one step closer to facing a North Shore team that is ranked No. 2 in the nation and was a 56-14 winner in its regional final against Fort Bend Ridge Point. North Shore has won 29 straight games and is trying to join Southlake Carroll (2004-06) and Allen (2012-14) as teams that have won three straight state titles in the UIL’s largest classification in the last two decades.

Duncanville led 35-7 after a 5-yard touchdown run by Malachi Medlock with 9:19 left in the third quarter. DeSoto (10-2) made it a game, closing to within 35-21 after a 58-yard punt return for a touchdown by Adonis Scott with 11:06 left in the fourth quarter, but Duncanville then scored 21 points in less than three minutes to end the drama.

“We saw them on film. We knew they were going to have a hard time blocking us. Most people do,” Samples said.

Duncanville has six of the Dallas area’s Top 100 recruits, but Medlock is not among them and has zero stars and zero college offers on his recruiting page. The 6-1, 215-pound junior has been a star, though, in his first season as Duncanville’s featured back, and even though the Panthers were held to 49 rushing yards as a team, Medlock ran for two touchdowns to give him 20 rushing scores on the season.

Entering Saturday, DeSoto was one of the few schools that had been able to beat Duncanville on a consistent basis, winning 10 of the last 12 matchups between two schools that are nine miles apart. DeSoto seemed to have the firepower to give Duncanville a test, with an offense that was averaging 47.3 points and had three receivers (Jerand Bradley, Jaedon Wilson and Johntay Cook II) who had combined for 2,059 yards and 30 touchdowns.

But this was a Duncanville defense that was allowing just 11.9 points and 128 passing yards per game. The Panthers held Bradley, Wilson and Cook to a combined 10 catches for just 85 yards and no touchdowns.

DeSoto, playing in a regional final for the first time since winning its only state title in 2016, was held to 93 yards of offense in the first half and went into halftime trailing 28-7. Three-star Illinois signee Samari Collier had just 73 passing yards in his final high school game before being replaced by backup quarterback Matt Allen.