DeSoto, TX - With the storms passed and just a little rain falling on the thousands on hand, over 600 Eagles graduated from DeSoto High School on June 2

as the Class of 2016 completed their high school days and prepared for the next phase in their future. With the traditional Pomp and Circumstance entrance, seniors poured into Eagle Stadium with umbrellas and rain coats, and exited later as graduates as the rain had passed.

The program included a welcome by Senior Class President Asia Smith, Salutatorian address by Christopher Turner and Valedictorian address by Jayla Kilson. Both Turner and Kilson earned full rides to the prestigious Stanford University where they will be attending in the fall!

Kilson plans to obtain her degree in biology with a concentration in biochemistry or chemical engineering to produce pharmaceuticals. She plans to join the World Health Organization and establish her own research facility. She looks up to First Lady Michelle Obama “due to her drive; she doesn’t give up in the face of adversity.”

Turner will study management science engineering or mathematical and computation science. “I hope to be involved in a start-up of a new company or idea and build that company into something that benefits humanity,” said Turner. He praised his mother as the most influential person in his life, “she is the reason I have made it to this point and have achieved at such a high level.” 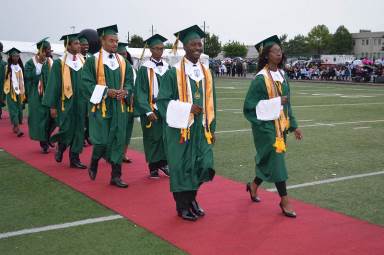 Valedictorian Jayla Kilson and Salutatorian Christopher Turner lead the Class of 2016 into the graduation ceremony.