San Antonio, TX - Duncanville's state-tournament experiences are usually much more about dominating than surviving. But on Saturday night, it was all about survival for the Pantherettes.

There was the six-minute scoring drought. There were the other long stretches when they just couldn't get their shots to fall. And there were the eight - yes, eight - three pointers made by Cypress Ranch's Ariana Whitfield. 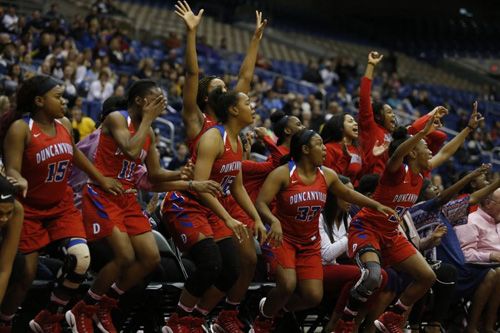 But when the clock ran out, Duncanville once again ran out on the Alamodome floor to celebrate the Class 6A title. The 76-65 victory gave Duncanville its second straight title and 10th in school history.

And yet it's the old familiar for the Pantherettes, who won their fourth state title in the last six years. Zarielle Green scored 25 points for Duncanville (39-2) and Aniya Thomas had 19, which included five 3-pointers. Starr Jacobs added 17 points and 11 rebounds.

Duncanville, which won last year's title game by 34 points, trailed by nine early in the second quarter. That came after the Pantherettes' six-minute scoring drought that bridged the first and second quarters. Duncanville missed 11 shots during the dry spell and watched its five-point lead morph into its biggest deficit of the game.

A 3-pointer by Green broke the ice and started a 14-3 run that gave Duncanville the lead back at 26-24. The lead was still two as the second half began, but like in its semifinal Friday, Duncanville took control in the third quarter.

"We just had to get it going," said Green, who was named the game's MVP. "The defense, especially, turned up for us."

It also helped that Thomas got dialed in from long range. The junior, who Green described as "our Steph Curry," hit four 3-pointers in the third quarter, all of which were from several feet behind the arc.

Thomas' accuracy helped Duncanville pull out to a 49-37 lead, but Cypress Ranch (32-7) kept battling back with the help of an even more impressive shooting barrage. Whitfield, an SMU signee, tied a state record by hitting 8 of 16 3-pointers. She finished with 32 points, and her final 3-pointer cut Duncanville's lead to 64-60 with a little more than three minutes left. Duncanville never let Cypress Ranch get closer, however, and a fastbreak layup by Green gave Duncanville a 72-65 lead with 45 seconds left. The Pantherettes were then able to put the game away with free throws.