Duncanville, TX - Duncanville, which has reached the Class 6A Division I state title game during the past two seasons, was issued one-year probation and a public reprimand Wednesday by the University Interscholastic League.

Duncanville’s punishment by the UIL is for a violation regarding the employment of coaches. In addition, Panthers head football coach Reginald Samples was also issued one-year probation and will be suspended for the first game of the 2020 Texas high school football season.

The UIL confirmed that Duncanville can’t appeal the ruling, but the Panthers can qualify for the playoffs next season.

The football program tweeted Jan. 23 that it was looking for a Week 1 opponent. The Panthers play South Oak Cliff in Week 2.

Samples was named USA Today National Coach of the Year last season as the Panthers went 15-1.

Duncanville hadn’t reached a football state final in 20 years before 2018, when it made the championship game for the first of two straight seasons. The Panthers went 29-2 during that span.

However, Duncanville lost both games to Galena Park North Shore, including a 31-17 defeat in December. The 2018 contest, which North Shore won, 41-36, on on a 45-yard Hail Mary as time expired, is considered by many to be the greatest finish to a Texas high school football state championship.

The Panthers were the top-ranked 6A team in the state all of last season and finished No. 12 in the country, according to MaxPreps. They finished ranked No. 2 in 2018.

During the UIL realignment earlier this month, Duncanville was realigned into District 11-6A with Cedar Hill, DeSoto, Waxahachie, Mansfield, Lake Ridge, Waco and Waco Midway. 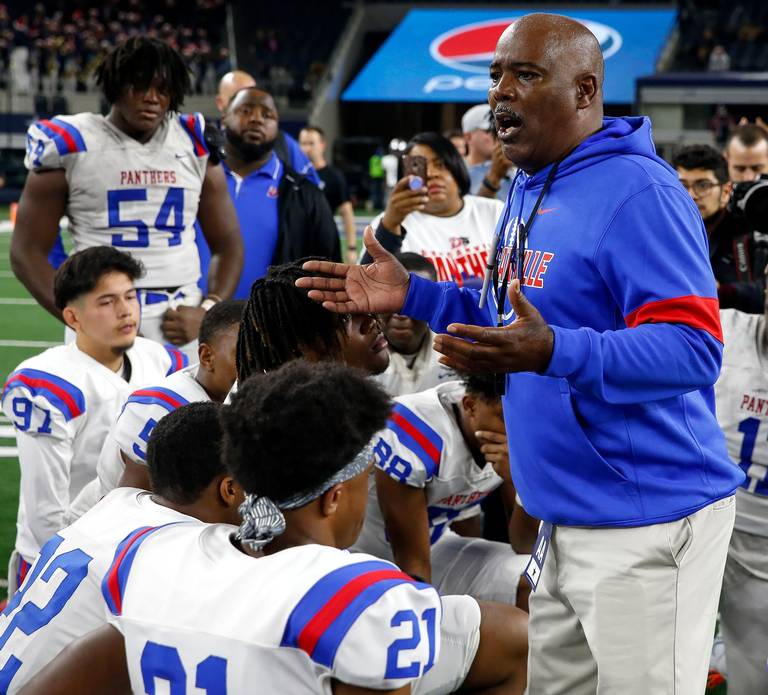 Duncanville head coach Reginald Samples talks to his team after losing to North Shore 31-17 in the 6A Division I High School State Football Championship game at AT&T Stadium in Arlington, Texas, Saturday, Dec. 21, 2019.