Lancaster, TX - On the evening of April 25, 1994, Ellen Clark looked out the window of her Lancaster office and saw the sky had turned to a strange hue of green and gold.

“Somebody’s going to get a tornado tonight,” she said.

She was right. Eighteen minutes after she left her office, the building, along with the rest of Lancaster’s historic town square, was flattened by a tornado that left three dead and damaged about 700 homes and buildings.

It was one of the deadliest tornado outbreaks in recent North Texas history, before the storms this weekend that swept across Garland and Rowlett, killing 11 and causing an estimated $1.2 billion in damage.

Twenty years later, much of Lancaster’s town square has been rebuilt, as have dozens of homes along nearby streets that were leveled by the storm.

The progress speaks to the possibility, and even the necessity, of moving past such a traumatic event.

Residents and officials who lived through the 1994 tornado say the recovery and rebuilding process was slow and daunting. Even with the new buildings, many constructed to resemble the historic structures that were felled, things will never be quite the same, they say.

“Going through a tornado is almost like going through a death. It’s a major change in your life. First you’re in shock. At some point you end up getting angry. ‘How could this happen to me?’” Clark said. “You can sit there and dwell on the bad parts, or you can take the love of other people working with you and pull together. It will never be the same, but life changes and you have to roll with the flow.”

In the hours immediately after the storm, Jan Pruitt remembers Lancaster residents wandering the streets like zombies from The Night of the Living Dead.

Pruitt describes the tornado, along with Hurricane Katrina a decade later, as a major turning point for how Texas communities respond to natural disasters.

“The second disaster is managing volunteers and in-kind donations. Lancaster was overwhelmed with things,” she said. “I noticed on the first day of coverage [of recent storms], the message on TV was, ‘We will let you know when we know what we need. Don’t bring things to the disaster area.’ This wasn’t said during the Lancaster tornado.”

Donald McMullen, Lancaster’s fire chief at the time, said one of the biggest changes since 1994 has been improved communications between governments and groups responding to the disaster.

Back then, radio systems for emergency responders often couldn’t communicate with one another. A more formal mutual aid system among cities was also established following the storm that makes it easier to manage equipment and staff being deployed to the area from various government agencies.

“There’s a more formal incident command system that lets multiple agencies work together. All those things have developed from that time to now,” said McMullen, now the Corsicana fire chief.

Nonprofits have also found better ways to communicate, with Texas branches of the Salvation Army, the Red Cross, Volunteer Now and the North Texas Food Bank forming a task force to prevent duplication of efforts and resources flowing to a disaster area, Pruitt said

Like most cities, Lancaster had an emergency response manual. Mayor Margie Waldrop, mayor at the time, said she kept a copy in the trunk of her car.

Having a plan in place proved crucial in the immediate aftermath of the storm, Waldrop said, but new challenges inevitably bubbled up, including dealing with predatory roofers and contractors who swooped in to try to profit off the storm.

But the good outweighed the bad, she said, as the community banded together.

“The people of this town came together and they really helped each other. There were people who came with machinery to chop up the trees. People were taking bricks they found and stacking them up,” she said. “It was so amazing.”

Eventually, though, as relief efforts shifted toward recovery and rebuilding, tensions began to mount.

“When it first happened, everyone was so kind,” Pruitt said. “That changes. You see people start getting angry because things aren’t happening.”

Long-simmering political tensions boiled over, leading to the ouster of the city manager and a lengthy search process for his replacement that distracted from the long-term recovery.

The city was also in the middle of a growth spurt that saw its population increase by two-thirds from 1990 to 2010, with much of the growth coming from new black residents.

The rebuilding process intensified discussions about the development of the community.

“I think it had a lot to do with the changing demographics in the city. The old guard vs. the new guard and how some viewed themselves as stakeholders with more at stake than others,” said Vic Buchanon, who was elected to the City Council shortly after the storm.

Buchanon said residents affected by the recent storms need to be prepared for setbacks and pitfalls, but not to let that discourage them.

“Look at them as hurdles that have to be overcome,” he said. “That’s going to be a step in the process, but that doesn’t have to be the whole process. ... They just have to persevere and keep the faith.”

Some stay, others go

Many of the residents whose homes were destroyed chose to move away instead of rebuilding.

“You lose some of your stability. People who have been active members of the neighborhood,” said Carol Strain-Burk. “The day in and day out of picking up the pieces is daunting.”

Burk said she understood that for many, including elderly residents or those with families, the stress of dealing with insurance and then rebuilding was too much to handle.

The century-old home where Burk’s father lived survived the storm but suffered such severe damage that it was declared a total loss by insurers. Burk and her husband persevered and rebuilt the Victorian-style home, which was on the National Register of Historic Places, over the course of a year.

“To me there is hope for those that really want to stay where they are. They just have to realize it’s not going to happen overnight,” said Burk, who now lives in the restored family home. “Part of having that commitment comes from having family and having roots there. That was my situation.”

On a recent weekday morning, Lancaster’s town square buzzed with activity. Groundskeepers were picking up dead leaves and construction workers were busy helping expand a bicycle shop. An old theater is being renovated to host plays and movie screenings. On weekends, the area is a popular gathering place for bicyclists stopping for food at a bakery or cafe.

Most of the red brick buildings have been restored, including the White and Co. Bankers building, where the new bricks on the rebuilt second floor are several shades lighter than those that were left standing after the 1994 storm.

But the square isn’t complete, with tile floors and concrete slabs left over from a bank building and department store serving as the only remnants of what once stood there.

In nearby residential neighborhoods, still-vacant lots are interspersed with the new homes.

Tornadoes struck again in April 2012, destroying several homes and damaging about 300 buildings, some of which are still being rebuilt. The event brought back painful memories for residents and required extensive cleanup, but there were no deaths or serious injuries.

As she walks back to her office, Ellen Clark stops to point out a live oak tree that was one of many damaged in the storm that had to be cut down to its stump.

Now, the tree stretches some twenty feet into the air, adorned with green leaves.

“They told us we needed to cut down every damaged tree because they wouldn’t survive,” she said. “This one did.” 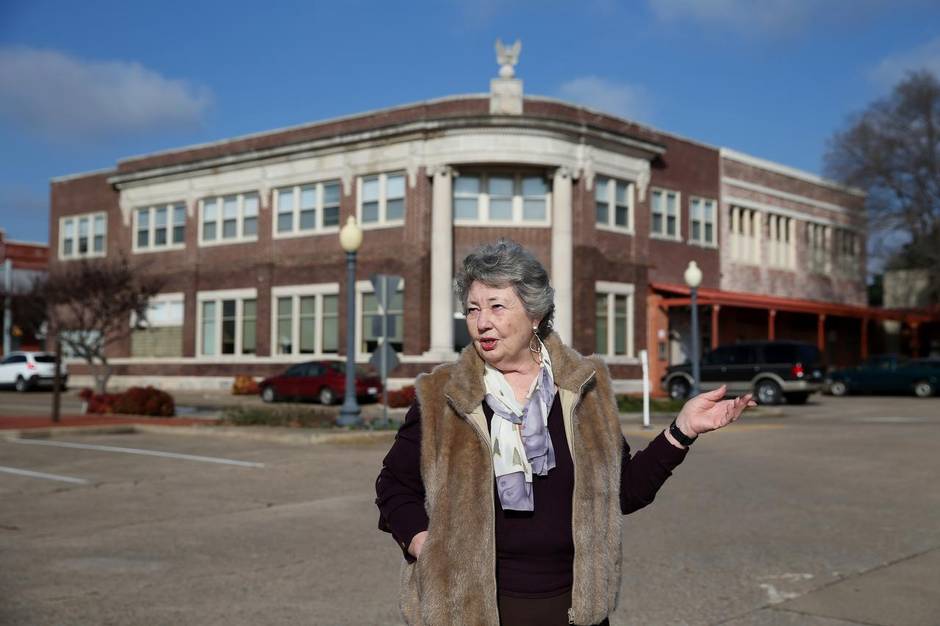