'It's all about the children': Lancaster ISD school board members discuss recent forensic audit

Lancaster, TX - Some members of Lancaster Independent School District’s Board of Trustees want the public to know they are focused on transparency and honesty.  “At the end of the day, it’s all about the children,” said Carolyn Morris, District 6 trustee.

Board President Marion Hamilton, Vice President Ty G. Jones and Secretary Carolyn Morris addressed the findings in a forensic audit on Thursday, which the board recently voted to release to the public.

Members of the Board of Trustees say they are focusing on transparency and honesty, after making public the findings of a recently completed forensic audit.

The forensic audit centered around the school district’s previous administration -- under the leadership of former Superintendent Dr. Elijah Granger, who resigned in 2020.

“The board, as a whole, decided that when we received it, we were surprised of a lot of information. We said this is the time that the community needs to know,” Morris explained.

The findings in the audit allege Dr. Granger had improper and unethical relationships and agreements with some former school board members, questionable policy changes and, among other things, contractual changes that would have awarded Granger the largest severance payment ever approved for a superintendent in the United States – at the tune of $2 million.

“Our administration definitely tried to, you know, turn pictures on who the board members really were. We’re here to serve the community and the students of Lancaster ISD. And we were painted as if we were bad individuals,” Hamilton said.

Lancaster ISD board members said they’ve been vocal and vigilant about their concerns over the past three years. Hamilton, Jones and Morris said they and their colleagues on the school board want the community to know they’re remaining focused on transparency and honesty.

“As a board, we are focused on best outcomes for our students, also for our teachers. Which, in essence, is our community,” Jones said.

The Board of Trustees said its mission is re-establishing trust with the community. 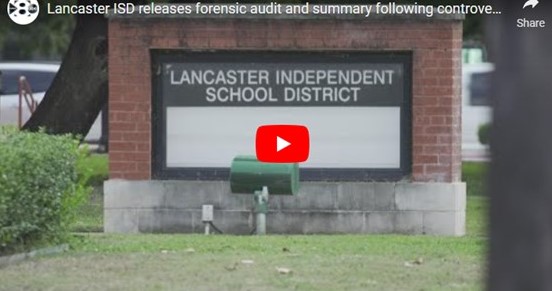 Under the direction of a new superintendent, Dr. A Katrise Perera, the first African American woman to lead Lancaster ISD, the board said it's focusing on the future.

“The atmosphere is different. The information that we have heard from teachers and staff are all positive,” Morris said.

Dr. Elijah Granger is a highly qualified Texas educator who served Lancaster ISD’s parents and students with valor and distinction for more than 8 years and received an outstanding performance evaluation as LISD’s Superintendent just prior to his voluntary separation in 2020.

Knowing Dr. Granger’s resignation had been procured under a Voluntary Severance Agreement, the District’s Board then breached its contractual agreement to pay his severance. Dr. Granger appealed to the Texas Education Agency and the Travis County District Court, where he seeks to hold the District accountable for its broken commitments. Before Dr. Granger’s claims have even been heard by the Court, the District has retaliated outside the litigation with an entirely Board-driven and self-serving “audit” riddled with inaccuracies and misleading statements. The District’s own auditors admit the report is far from complete, and the report attempts simultaneously to justify the District’s actions and smear Dr. Granger with voters and the public.

The audit report’s recommendation that the District refer the matter to regulatory or law enforcement agencies is a complete sham, as no one – not the Board, the auditors, the TEA, the Department of Education, nor any official with any law enforcement agency – has ever contacted Dr. Granger to ask even a single question investigating the subject matter of this “audit.”