Lancaster, TX - Jase Stokes doesn’t have an involved father in her life. But the 16-year-old does have a father figure looking out for her.

“She comes in and sits by me. And she might talk, or might not,” said Addison Russ, an assistant principal at Lancaster High School. “I am learning about her, but not really hearing from her.”

Stokes is one of 12 freshman girls who have formed a support group, Girls Fight, to talk about shared experiences and channel anger or ambivalence into something positive.

These days, the girls — many of whom are a year older than most freshmen — are sewing dresses from pillowcases to send to girls in Africa who need clothes to attend school.

“I never learned to sew, so I like it,” 15-year-old Rikkia Davis said. “But I thought we were just going to sit down and start making dresses right away. Instead, we had to cut so many patterns before we did anything. It felt like we did that forever.”

Davis’ statement is about as talkative as the students get in front of a stranger. They are bold, forthcoming and quite graphic in trying to distinguish between myths and facts about sexual activity when talking with a representative from nonprofit Girls Inc. But they are reticent and standoffish when asked about their own life stories.

“They’re still learning to open up around people they don’t know,” said teacher Dorothy Cooper. “Some of them come from hardship, either in school or home life or both. A lot of them are assets in the classroom, even if they don’t know it.”

Cooper came up with the name — Fight stands for Facing Issues Girls Have Today.

The girls are part of Lancaster’s Star Academy, a program established through a Texas Workforce Grant to help overage and at-risk students reconnect with education through accelerated courses.

It’s important to identify at-risk girls early, said Star Academy Administrator Latasha Murry, which is why all the girls are freshmen.

“We wanted to get girls who seemed to be acting out,” Murry said.

There are rules to remain in good standing in Girls Fight. Members have to be on time. They have to complete their schoolwork. They can’t have any disciplinary referrals or skip meetings.

“The goal is for this to be a one-year thing before they go on to finish their high school careers,” Murry said.

The girls meet Wednesdays to share their stories, then they work on their dresses after school with help from Lisa Bray, a fashion design teacher.

The clothes are distributed through Little Dresses for Africa, a nonprofit, and bound for Malawi, a small country in southeast Africa with a large orphan population.

“I liked the chance to learn something new,” 15-year-old Otice Harris said. “We learned to sew and picked out patterns.”

Once the conversation turns toward personal subjects, the girls are tight-lipped. Instead, they talk about school.

“The kids are messy and loud,” Harris says.

Complaints about school are the students’ way of covering up, Cooper said.

“Them saying they don’t like school is not accurate. I can see it in their faces,” she said. “Rikkia is like a secretary. Anything you need, an errand to run, they’ll get it done before anyone else will.”

Russ stepped in as Stokes’ father figure at a father-daughter tea that Cooper organized for Girls Fight members.

“I was so scared when I thought about it,” she said. “I thought: ‘What have I done? Am I going to make some of the girls uncomfortable?’”

Other male faculty members were there for girls who otherwise might have been alone.

“Just to have them there was special,” 16-year-old Biance Taylor said.

“It was nice,” she said. “It was like, ‘Somebody actually wants to be there for me?’”

Russ took a lighthearted approach to the tea ceremony but understood its significance.

“It’s kind of funny because I have two boys but no daughters,” he said. “I went to go find her and thought, ‘Hey, she thinks I’m this big square,’ but you just don’t know what they’re going through. I know that girls go through an awful lot with their mothers, but this helps you realize how important that father-daughter bond is.”

Russ continues to check in on Stokes and says she’s gradually getting comfortable around him.

“The other day, she came and sat next to me and she didn’t say anything and kind of kept her head down,” Russ said. “I thought something was wrong — ‘Oh, no, something’s about to go down’ — but no, she just wanted to sit. After about 15 minutes she just says, ‘OK, see you later,’ and gets on with her day.” 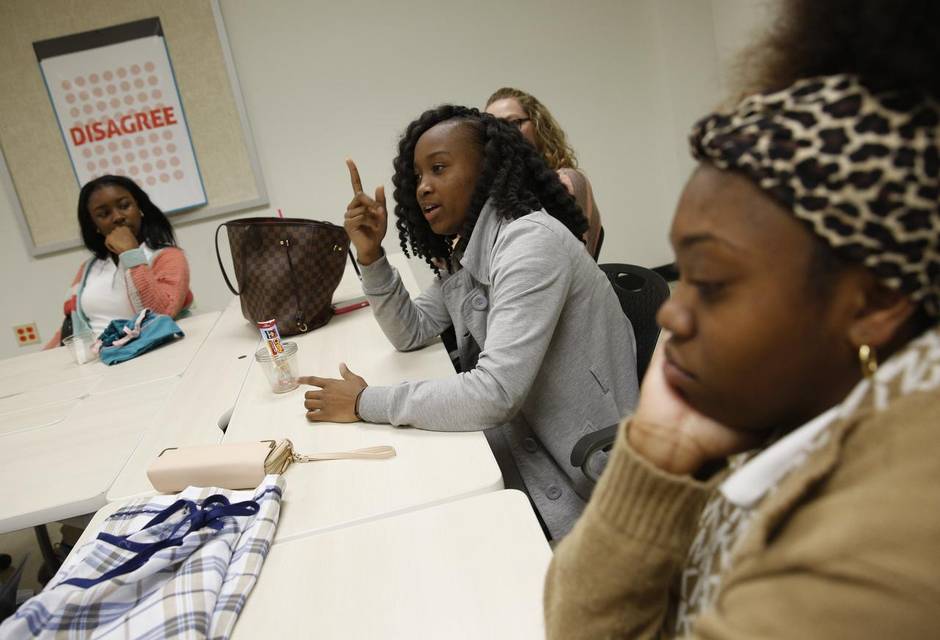