MIDLOTHIAN, Texas - Midlothian police officers and firefighters helped make the first day of kindergarten special for a little boy who is facing some challenges this school year.

Batman and Captain Marvel greeted 5-year-old Michael Denison outside his house Monday morning. He got a look inside a police squad car and fire engine before taking off for his first day of school.

Then at Mountain Peak Elementary, classmates and teachers gave him a warm welcome. 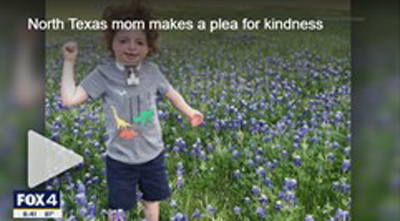 Just like in the movie Wonder, Brittany Denison is praying that other children will be kind to her son on his first day of school. Michael looks different because he has Treacher Collins syndrome.

Last week, Michael’s mom, Brittany Denison, made a plea on social media for kids to be kind and asked parents to educate their children about people who are different.

Michael was born with a rare condition called Treacher Collins syndrome. All of the bones in the lower half of his face are smaller than they should be just like the boy Auggie in the movie "Wonder."

"We've had multiple instances where people have used the words scary, monster or weird and that's really uncomfortable," she said. "When you're in a room with Michael for two minutes you understand immediately that he is just the same as every other kid."

Midlothian’s fire chief said as the story spread on social media, his firefighters knew they wanted to do something to help. So they reached out to the family and school to coordinate the special escort.

"My name is Dale, I am the fire chief," Dale McCaskill told Michael. "We heard you might be a little nervous going to school your first day so we are going to give you a ride on the fire truck."

Michael's mom said when she made that plea on social media she had no idea it would lead to so much support in both the community and from people all across the world.

"To see him smile like that, that was once in a lifetime. That was amazing, unforgettable," she said after dropping him off for his first day. "He's an extraordinary kid so I wanted him to have an ordinary year. But I can’t imagine this will be an ordinary year for him anymore. The welcoming experience of the kids being outside, the waves and the smiles, that’s what you want for your kid to be welcomed with open arms."

She hopes that it creates an even bigger conversation for all families and all students about accepting each other despite differences and standing up for one another.