MIDLOTHIAN, Texas — A high school student in Midlothian has been disciplined after a video surfaced online this week of the teen using the N-word and saying Black people can go back to Africa.

The development comes during a divisive time in the district that's already faced backlash for other racially charged incidents.

In 2018, three students were disciplined over a viral video where one teen used the N-word 25 times in 10 seconds.

In 2020, Board Trustee Tami Tobey was also in the spotlight after a photo of her in blackface at a 2012 Halloween party surfaced. Tobey apologized and was re-elected to a new term.

The video surfaced as the school board faces pressure from a right-wing group that demands critical race theory or social justice indoctrination not be taught.

The board is also facing pressure from a right-wing group in town, Respect Midlothian 1888, demanding that critical race theory or social justice indoctrination not be taught in the classroom.

In the video, which was made aware to district officials on Monday, you can hear a male say, "You think I care about what all those damn *expletive* have to say about me? *Expletive* *expletive* monkeys go back to Africa before I whip all of them."

District Spokesperson Sheri Brezeale told WFAA that the district confirmed the voice in the video was a high school student and that disciplinary action was taken.

"Midlothian ISD is aware of a racially charged social media post circulating on one of our high school campuses. MISD does not condone this behavior. The campus immediately investigated, and they were swift with consequences. I cannot discuss decisions related to student discipline due to federal educational privacy laws."

When Tylan Swiney saw the video earlier this week, she said she was appalled. Swiney is a high school student within MISD and said she knows the teen who is talking in the video.

"He's in my English class. He just let me borrow his charger and some colored pencils on Friday," Swiney said. "It's shocking to me that he would even do that knowing how many people this is going to impact."

Swiney's mother, Cee Williams, said she wasn't surprised. Williams said her daughter has faced discrimination within MISD before, and has even been called a racial slur several times.

"It's hurtful," Williams said. "It's like more pain on top of pain. These are children, so what they're doing is learned behavior at home."

According to the United States Census Bureau, African Americans make up just 5% of Midlothian's 33,532 population.

The district is dealing with this incident as a right-wing group called Respect Midlothian 1888 lobbies and pressures trustees to preserve what they call "the American spirit in Midlothian by protecting conservative Christian values, constitutional rights, and traditional academic education." 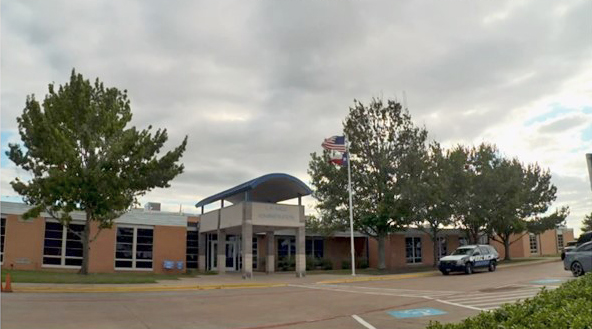 One of which is to form a committee that would audit "curriculum, technology, and teacher training to ensure it does not contain inappropriate themes of critical race theory, social justice indoctrination of students, or explicit content."

It's not the first time a group like this in the last year has dedicated effort towards influencing the direction of a school board.

In Southlake, "Southlake Families" was created as a political action committee to back Carroll ISD candidates who didn't support an overarching diversity plan that would strive to serve minority students within the district.

The plan was created after viral videos of students using the N-word surfaced, and national attention reached the affluent enclave of North Texas.

A recent goal removed from 1888's website included demanding the termination of Chalisa Fain due to "employee handbook violations."

According to this district Facebook post, Fain was hired in August of 2020 as the new Diversity, Equity, and Inclusion director.

The hiring came after news broke of Tobey's blackface incident.

In this 1888 press conference held in July, member Monica Mote also expresses that Fain should be terminated and lists off many reasons why Fain isn't qualified to have the job.

In the district Facebook post mentioned earlier, a spokesperson wrote, "Fain has more than ten years of experience promoting diversity, equity, and inclusion in Dallas, Texas."

Per the Midlothian Mirror, a petition seeking Fain's removal gained over 1,100 signatures in July.

At the time, citizens in the article were concerned about a social media post that Fain made regarding recommendations for an HVAC repairman who was Black.

Mote also said in the press conference in July that there were other candidates more qualified for the job and was displeased that a subcommittee recommended Fain be hired.

One of the goals on 1888's website is, M"ISD and Human Resources must hire based on experience, qualifications, and skill, not skin color. Biased 'subcommittees' formed from one singular group of individuals will not be allowed."

On Tuesday night, Mote and two other parents who have been speaking on behalf of 1888 met with board members in two separate closed sessions regarding grievances they recently filed with the superintendent.

It's unknown what those grievances entail, but sources said it centers around 1888's mission to remove Fain from her position.

The district would not comment on the grievances saying they were heard by the board in a closed session.

Mote and the other parents did not provide a comment either and quickly left the board meeting when WFAA confronted them. One even shielded her face with a binder.

When the board reconvened into an open session, it voted 5-1 to uphold the decision district officials originally made regarding said grievances. That decision, however, is unknown.

Tobey was the only trustee who opposed and sided with the parents' appeal.

The board also voted to direct the administration to address concerns discussed regarding hiring policies and to meet with each complainant in the future.

Board President Gary Vineyard said Fain was still employed with the district after the meeting and that, "it was never in question."

WFAA went to Fain's house on Wednesday, but no one answered to provide a comment.

Still, this week's events suggest to Williams that the district may not be passed a problem that she says she's known about for a long time.