Midlothian, TX - A Red Oak family is grieving the death of their son who was killed in a head-on collision that occurred while a driver was fleeing from Ellis County law enforcement agencies Friday.

Garrett Blake Tolliver, 18, from Morgan, was driving south on U.S. Highway 287 when the driver of a stolen white utility van struck him head on, said Nick Harp, the Midlothian Police Department Administrative Sergeant. The driver of the van could not be identified at the scene because the body was too badly burned in the fire started by the wreck, Harp said.

“Everybody who knew Garrett loved him and everyone knew him,” his mother Stacey Tolliver-Whitney said.

A GoFundMe account, which allows people to donate to causes or crowdsource funding, has been set up online to help the family cover funeral costs and continue the help Tolliver was giving his girlfriend to cover the cost of a vehicle and to continue her schooling, his mother said. Tolliver's body was released Monday afternoon and the family is planning a viewing Wednesday and a service Thursday, she said.

“When I'm in my right mind, I'm going to find a way to make sure there are no more high speed chases in Ellis County, so someone else doesn't lose a mother or child,” Tolliver-Whitney said.

The collision ended a pursuit that began east of Waxahachie.

Ellis County Sheriff’s Office was notified by Waxahachie Police Department to watch for a white van stolen out of the Academy Sports + Outdoors parking lot in Waxahachie at 1 p.m on Friday, according to an Ellis County Sheriff's Office press release. A GPS indicator on the van was indicating the van was on Farm-to-Market Road 879 near FM 1722 and Sheriff’s Office patrol units responded to that area. A patrol deputy observed the suspect vehicle on FM 879 and turned to follow it.

The suspect van fled and a pursuit was initiated at 1:12 p.m., stated the release. The suspect vehicle drive on FM 879 and one patrol unit was run off of the roadway, but no injuries incurred. The suspect vehicle continued onto U.S. Highway 287 northbound, with sheriff’s office and Waxahachie Police Department units in pursuit.

Officers in pursuit reported the van reached speeds of about 100 mph, Harp said.

The Northern Ellis Emergency Dispatch received a call for assistance at 1:17 p.m., according to a Midlothian Police Department press release. The crash occurred in the 5400 block of U.S. Highway 287.

The medical examiner is expected to identify the van's driver during the examination, Harp said. A driver's license was found at the scene, but could not be matched to the body, he said. It's unclear at this time as to when the identification of the suspect might be released.

No other people were in the vehicles at the time of the accident, Harp said.

Traffic on the southbound side of the highway was shut down while the crash was cleaned up, but was reopened at about 4:08 p.m., the Midlothian press release stated. No other vehicles were involved in the crash, Harp said.

Justice of the Peace Steve Egan was contacted to pronounce the deceased who were transported to the Dallas County Medical Examiner’s Office. The Midlothian Police Department crash reconstruction team is working the accident investigation that is still ongoing. 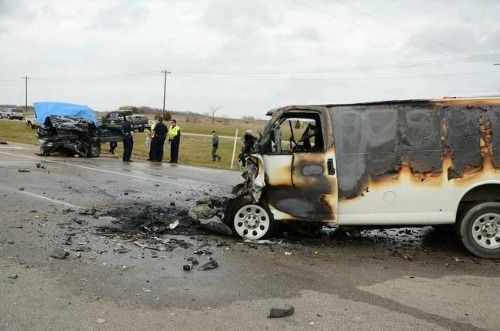