recognized as young ambassadors and leaders of Midlothian.

“The purpose of this program was to be an independent leadership-type program where students build responsibility and are ambassadors of our community,” expressed Tasha Taylor, Executive Director of the Midlothian Reach Council and co-founder of MYLC, of the program held May 22.

Sponsored by Methodist Mansfield and Old Republic Title, the event hosted about 30 attendants who all gathered to celebrate six outstanding students.

Among those who attended, Mayor Bill Houston, who gave the invocation, and special guest speaker and Midlothian ISD Deputy Superintendent, Judy Walling, encouraged the students to continue to “pay it forward” for other upcoming youth leaders.

Created out of a multiparty collaboration of the Reach Council, the City of Midlothian, and the Midlothian Chamber of Commerce, the MYLC was officially formed in the fall of 2016.

“Reach has been providing education and prevention programs in Midlothian for nearly 30 years, and I’ve been with the agency for about five years and have been on the board prior to that,” began Taylor. “And I thought for a long time about getting the youth more involved with our programs. You see youth in the school district in a lot of different capacities, but getting involved one-on-one has been a goal of mine for a while.” 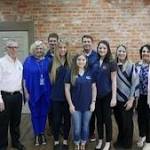 “So I got talking with Joe Frizzell from the city, and he told me how they were really interested in doing a youth council,” she articulated further. “Well, I happen to be a member of the adult Leadership of Midlothian program, and got talking with Cammy Jackson of the chamber, who said the same thing and wanted to do a youth version of this program.”

With goals created by each agency for high school leaders, the committee selected a small group to participate in leadership events and activities throughout the year.

From attending city council meetings to touring state government landmarks, and performing social services, the students were given an opportunity to learn about local and national inner-workings in education, government, and business.

“My favorite event we did this year was the Austin trip,” recalled Brooke Boisvert, a Midlothian High School graduating senior. “It was a great experience overall because we went down to Austin to the state capitol and I thought it was a really neat idea for students to become involved in the community and learn about the government.”

“To me, it was more impactful than being in the classroom. I feel like I gained more real life experience because that’s what’s going to be out in the real world, so that trip for me personally was the best,” she added.

“My favorite part of this was when we went to the senior center,” expressed Caitlyn Harris, a Midlothian Heritage High School junior. “We got all those board games and sat down and interacted with the residents, playing new games and having fun.

“[...] It was nice to hear all of their stories and that was a really neat experience for me.”

As the MYLC committee provided the criteria components for the applicants, the students excelled and enjoyed different monthly challenges the program offered.

“We hope that these students have learned something that they can take with them into their freshmen year in college,” said Cammy Jackson, President of the Midlothian Chamber of Commerce and co-found of the MYLC. “Along with the youth MYLC, we do have an adult leadership program for those who live and work in Midlothian. It’s a great way to learn how to get involved in the community, meet people who make things happen, and how you can become one of those people.”

For an impressive first year, the MYLC will continue alongside its father program with hopes to add more students and raise up young leaders throughout Midlothian.

“We’re very proud of our students and that they participated in our program - it’s been a phenomenal first year,” Taylor finished.