Party on the patio: From meeting rooms to Texas tunes, Midlothian restaurant is creating its own niche

Midlothian, TX - When Brad Golden and his family made the decision to enter the restaurant business, they did so wholeheartedly and with a plan to gradually roll out new aspects of the dining area, bar or patio.

After about 18 months of working through kinks, training staff and building a hometown brand, Beef ‘O’ Brady’s has quickly become a staple in Midlothian, as it boasts the largest selection of craft beer on tap in Ellis County, a state-of-the-art meeting room and space for groups of any size.

And, for those who haven’t yet caught on, “Beefs” is also the new go-to venue to fill those Texas country music cravings. 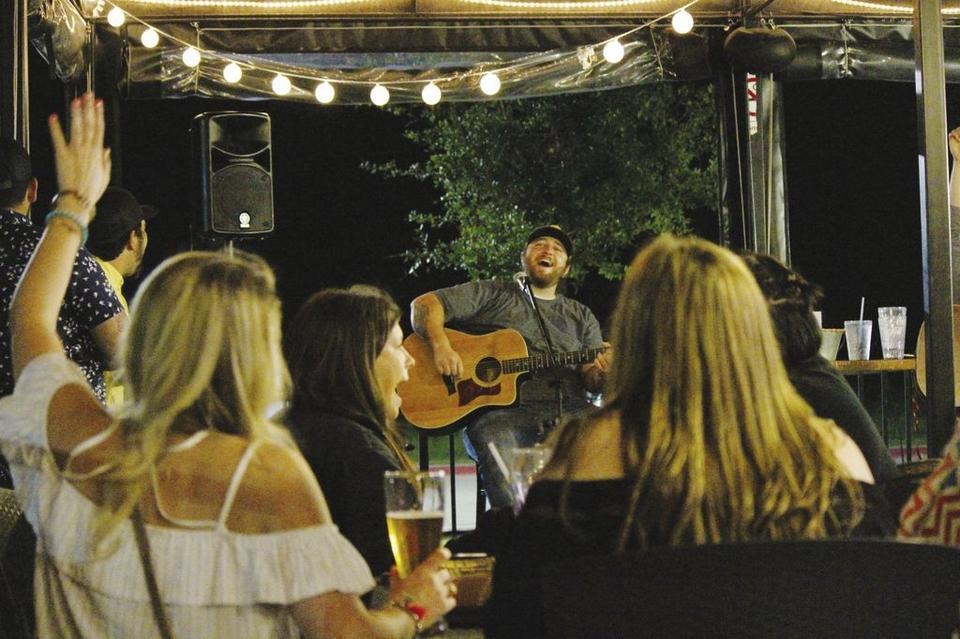 In an interview with the Midlothian Mirror before opening the doors in August 2015 to what has turned into a top-10 performer in the Beef ‘O’ Brady’s franchise, Golden said he was “most excited about the patio.”

“I want to see it full and some of our local musicians out there having a blast,” he added.

The desires expressed by Golden have come to fruition with a 10-week patio concert series coordinated by general manager EJ Perrin.

“We’ve had a couple people play during big events like St. Paddy’s Day or something like that, but we started the first 10-week series last year right around November,” said Perrin of the patio event held on Saturday evenings. “It really helped our business on the weekends. We have had some pretty good local people who have come out here and played but nobody too big, yet. It has been people who enjoy playing and who our bar patrons enjoy listening to. It’s been pretty good up to this point.”

Beef’s third patio music series begins Saturday, June 17 with Tristan Bugenis and continues through Aug. 19 when the Preston Scott Band takes over the patio. Music begins at 8 p.m. and runs until midnight.

The atmosphere on the bar side of Beef ‘O’ Brady’s takes on a Fort Worth vibe after 8 p.m. on Saturdays during the series thanks to the open-air patio, two dozen options of craft brews and acoustic tunes from some of the best talent Ellis County has to offer. However, thanks to a wall that divides the restaurant from the bar area, “Beefs” remains family-friendly even during the peak times for the bar.

“When Brad opened this place, that was kind of what he had in mind — something for families and something for people who want to go out and just have a good time,” Perrin said. “We set up the patio and built it to have plugins and stuff for the bands, but we didn’t know when we were going to start using it. It was definitely in the works.”

The first foray management took into the live-music scene was during the Aug. 10 grand opening when Preston Scott, a Midlothian musician and lead singer of the Preston Scott Band, drew a “huge” crowd, Perrin said. He added that Scott has since played a few other times during the two previous patio series.

“When we first opened, we were just trying to get everyone trained as far as service and stuff like that so we couldn’t really focus on doing anything extra other than running the restaurant. It took about eight months to a year to get to a spot where we are now and where we can do big events where we rope off the patio and have 300 people out there without any crazy stuff going on.”

During the music series, Perrin said the staff would rope off sections of the parking lot or small green space next to the stage for picnic tables and backyard games, such as washers or cornhole. All of which just add another unique aspect that few places in Ellis County can match.

The success of the restaurant, which is one of the largest in the Beef ‘O’ Brady’s franchise, might be a surprise to some — just not for Golden or Perrin.

“Brad had a vision for it,” Perrin said. “We worked together throughout the building process, so I kind of knew where he wanted to go with it. It kind of surprises people from around here, but we are giving them a place to go instead of having to drive to Fort Worth or Dallas to be able to hang out on a patio, enjoy live music and have a few cold beers.”