Midlothian, TX - Standing at just 4-foot-6, Miranda Wright is like any other third grader. She loves swimming, baking with Grandma, and hanging out with friends.

But what makes this Midlothian resident stand out is not her big brown eyes and infectious laugh — she’s got a heart of gold. 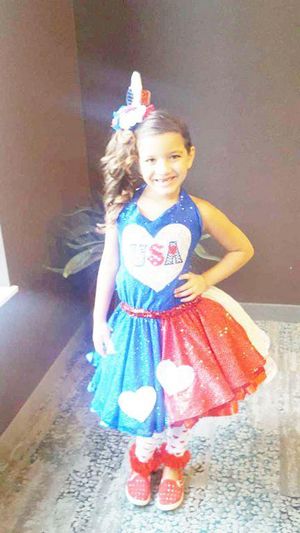 Unique for her age, Miranda has also just earned a pretty prestigious title, as she served as the grand marshal of the Midlothian Independence Day Parade on Saturday, July 1.

An event she has attended every year since she was born, Wright didn’t just receive the title for being cute — though it helped — but for her passion to help others.

“One of her favorite things to do is feeding the homeless, so a lot of times we’ll load up in the back of the truck and make a bunch of sack lunches,” said Amy Wright, Miranda’s mom. “Last time we ran out of food to hand out, so she took the cooler in the car that we had put our own snacks in and started handing those out instead.”

The current “Ellis County Queen of Hearts,” a title received after donating 11,000 items to Manna House last year, Miranda is no stranger to the spotlight. However, her mom thinks this particular role is going to be slightly different.

“I don’t think she realizes how big of a deal it actually is,” said Amy. “We keep trying to explain to her, ‘people are going to be coming up to you, shaking your hand, asking for autographs, all kinds of stuff.’”

And while Miranda’s resumé proves she can handle it, this special honor may be something she will have to see to believe.

Though, even before Miranda cruises through town in a shiny convertible equipped with a police escort, she will first head to Heritage Park for a meet-and-greet.

“I can’t wait to see who all shows up,” Miranda exclaimed.

In addition to sporting a custom-made red, white and blue dress, the giggly eight-year-old said there’s something else she is excited for.

“Look at my wave,” Miranda chimed as she proudly twirled her hand through the air. And while her gracious wave is already princess-worthy, her mom couldn’t help but laugh to say she thinks she has an idea of how she has it down so well.

To her satisfaction, the grand marshal title also requires Miranda pick her very favorite float for the Grand Marshal Award.

Luckily for those decorating, she’s easy to please.

“I’m looking for something pink and sparkly.”