Midlothian Police use over $160,000 in grants to purchase new vehicle, body cams and simulator

Midlothian, TX - Thanks to $160,900 in grant funding, officers with the Midlothian Police Department have a new incident response vehicle, training simulator, and body cameras.

The department tools will improve the agency’s capability on calls, sharpen the skills of its officers, and add another layer of protection for residents.

Midlothian Assistant Police Chief Kevin Johnson said the department has been proactive in applying for grants over the years. Previously, the agency has received funding for new radio equipment.

The first grant was for $80,000 from the state’s Justice Assistance Grant Program and was dispersed through the North Central Texas Council of Governments. These funds, plus seizure funds, were used to purchase a $117,000 incident response vehicle.

“The goal was to design and secure a piece of equipment that was multi-functional. So this truck will go to crime scenes. It will go to fatality crashes and it can go to special events. It can also go to general incidents,” Johnson said. “It will be a good short-term command post for a weather event or natural disaster. The truck is not anything that eight people are going to work out of for a week. It is quick and easy to get there. You can get an incident command program established and start to work.”

Johnson explained the truck was designed from the ground up with input from experts around the department and other law enforcement agencies.

“This was built by Supreme in Cleburne. It is a local company, and it was convenient to go down there and plan it with them. They really customized this to what we were trying to accomplish and the equipment that was going in it,” Johnson stated. “We brought in our patrol commander and our CID commander. Our CID commander said, ‘I would like to have a space for a portable kit that I use for small crime scenes,’ and we carved out a place that it would fit. Our crash investigation guys identified issues with our equipment. We built in some shelving that has space to store their equipment and power to keep it charged.”

The truck features high-speed wifi with both secure and guest networks, stand-alone power, three computer workstations, multiple storage spaces, an IP phone, and it also features a large television on the outside of the vehicle were information can be displayed and briefs can be conducted.

“We have used it several times in kind of a limited capacity. We have some more equipment to get installed in it, radios and computers. We can (currently) work off of laptops and handheld radios,” Johnson explained. “We have taken it to a search warrant where we have recovered evidence. We took it to an investigative incident. It was an incident on 67 that involved a murder suspect from Irving.”

Johnson stated that the truck is an excellent resource for the department and the vehicle’s capability allows for better organization and deployment of resources. 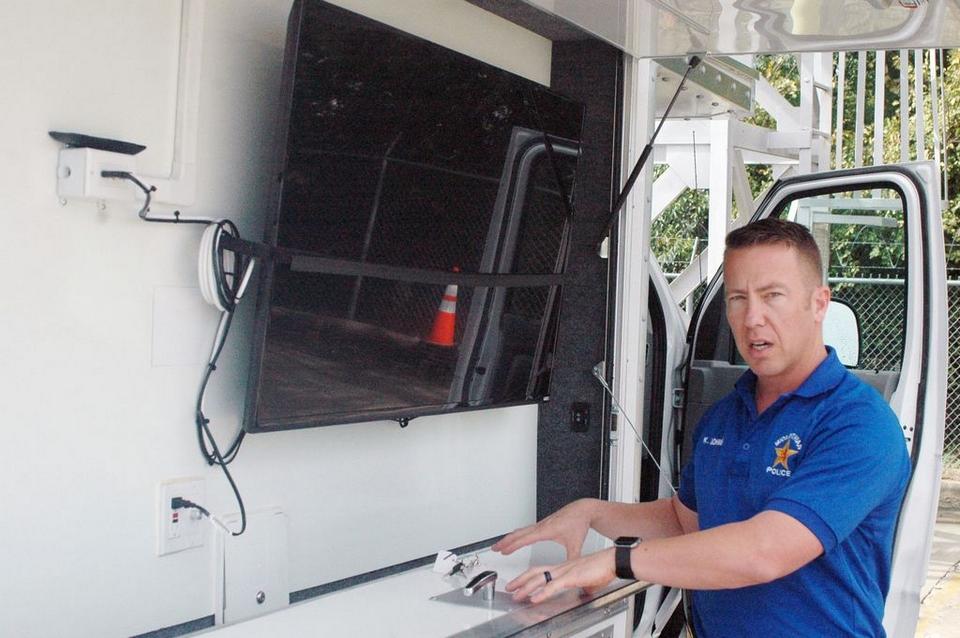 The department’s second grant was also from the Justice Assistance Grant program was for $52,000, which went to the purchase of a new training simulator. A company called Milo Range makes the simulator.

The company’s website states Milo Rage has been in business since 1994. The Milo Rage product line has been selected as the de-facto training simulator for all branches of law enforcement, the military, security, and public safety agencies throughout the United States and the world.

Johnson stated the system has more than 700 interactive realistic branching scenarios that are used to train officers. The branching aspect of the program allows the operator to select the way the scenarios are played out for the officer. This option can dictate how the officer responds to the situation.

“What that means is that when you start the scenario and the operator chooses how it goes. In one these scenarios, for instance, there is an agitated man on a porch of a home. He is clearly agitated and shows some signs of a mental health issue. So if the officers are responding well, practicing good safety, and handling the situation well, we can de-escalate it,” Johnson stated. “If they are not handling it well he (the suspect) can advance on them, pull a gun or a knife. So the operators watch the scenario, and the operator chooses the outcome. It allows the instructor to guide the scenario.”

Johnson stated the Milo Training System allows the officer to handle the situation in several ways from using lethal force, non-lethal force, or talking with the individual to resolve an incident. It also allows the department to create its own scenarios based on situations officers have faced in the field.

Johnson noted that this element of the system is beneficial because if there is a particular area in the city that is receiving a lot of calls, then they can go out and film at that location with actors. It then can be put into the system for officers to train.

The third grant was for the purchase of more than 30 body cameras. The grant funded 80 percent of the cost, $28,900, and the department paid the remaining 20 percent.

According to the office of Justice Programs website, a study funded by the Office of Community Oriented Policing Services and conducted by the Police Executive Research Forum found that some of the benefits of using body-worn cameras incudes better evidence documentation increased accountability and transparency.

Johnson said the use of cameras would not only help to better document situations that officer’s face in the field but also help to clear up issues or problems that come up. He added that the video from these cameras could also be used to as a learning tool to educate officers. The cameras went into use on Oct. 6.