Midlothian, TX - Parents addressed the Midlothian ISD Board of Trustees with concerns about iPad usage and email access to elementary students during the monthly

Employees of MISD will also be pleased that the board unanimously approved the one-time supplemental compensation of $1,000 for full-time and $500 for part-time employees. The money will be awarded to employees before the Thanksgiving holiday starts.

Following the acknowledgment, the floor was open for public comment. The topic of elementary students using iPads proved to be an essential concern for parents. Five parents addressed their uneasiness about children at the elementary level using the district-issued iPads as part of the M*Powered initiative and having access to an email address.

First to address the board was Diane Stanely, mother of 13 children. She shared that her fourth-grade son received an email from another student with the words “F*** you.” She said the words were spelled out completely.

Stanley said she wasn’t even aware her children had a school email.

After gaining knowledge of the emails via Facebook, it was then when she checked her child’s iPad and found the message.

She was contacted my MISD about the situation, they advised her there is “protection” on the iPads.

Following that conversation, she opened the Internet and was able to pull up explicit videos with “nakedness and cursing.” She was able to do the same thing on her kindergartener’s iPad.

“The protection is just not there for our kids,” Stanely said.

Another concerned parent, Ashley Edmonston, has three children at Longbranch Elementary and she reiterated the safety concern. She also voiced that she didn’t think it was necessary for her six-year-old to use technology to learn. 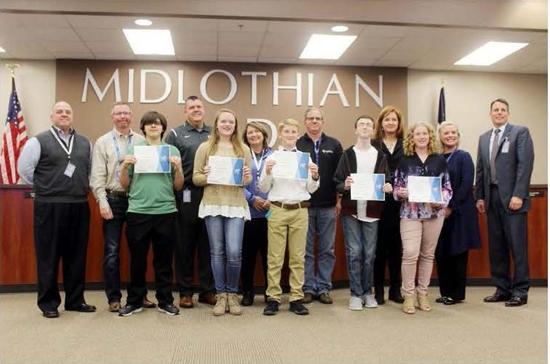 Her daughter had an email sent to her, but it was in a positive light. She mentioned she opted out of allowing her child to bring the iPad home.

Edmonston commented on the app Canvas, where students turn in homework and more, is not user-friendly.

“I guess I missed when it all happened. I guess when parents had a voice on giving it to each kid, and that’s on me because I missed that,” Edmonston said.

Sundey McClendon has three kids in the district and initially spoke out on Facebook about the iPads being unnecessary at the elementary-school level.

“I’m having a hard time understanding why it’s necessary and I would encourage you to communicate that in terms we [parents] can understand. I promise that if you hand me research, I’m going to read it and understand it to the best of my knowledge to the point where I feel comfortable backing you up on it,” McClendon said.

Her ultimate request was for the school to reconsider giving students at the elementary level iPads all-together.

Matt Hallmark approached the podium explaining how he has three students in the district and is concerned about not knowing his son had an email account and the possible concerns it could cause in the future.

Hallmark wasn’t okay with not having parental access to the account and suggested to have “the ability to request inactivity of students email accounts to protect them.”

“I’d like to put it [responsibility] back in the hands of the parent to determine whether or not their children are in a position where we can teach digital citizenship. I don’t think a kindergartener has the same capacity for digital citizenship as a high school student,” Hallmark said.

“That had been something not communicated to me as a parent even last year,” she said.

McDonald suggested sharing the email’s credentials with the parents. She also had concerns about students so young handling and having the responsibility of an expensive device.

Trustee Andrea Walton asked a clarifying question to McDonald, regarding her seeking out personnel. Her response was yes and that they told her “It’s a common problem and we’re sorry there’s nothing we can do about it.”

McDonald ended her public comment by mentioning the public library servers wouldn’t allow her to access WiFi without using a MISD device.

Wrapping up the meeting, Trustee Jim Norris asked the board to consider paying the additional one-time supplemental compensation for MISD employees. Full-time employees $1,000 and part-time employees $500.

“We never really know honestly if we’d have this money, this time I was not confident that we would have this kind of money this time,” Norris said.

He then entertained a motion to pay the employees on Friday, Nov. 17, before the holiday break. The board passed the motion unanimously.

‒ The budget amendments for the 2017-2018 budget passed unanimously

‒ The board considered amending MISD representatives for the A.H. Meadow Library Board for 2017-2018. Walton asked to consider having students involved on the board. It was agreed this suggestion would be sent back to the library board. This was approved unanimously.

‒ Lowell Taylor with Huckabee and Associates, Inc. provided an update on the Irvin Elementary School rebuild project. The board was pleased with the product and voted unanimously on the design.

‒ Dan Arrowwood with HKS, Inc. presented the schematic design of the MHS baseball, softball, and tennis complex and was approved unanimously.

‒ Permetti went into detail on the new categories for MISD employees of the year to include all departments including instructional aid, nurses, librarians, specialist, principal, assistant principal, maintenance service team member, custodial, child nutrition and transportation. This year, MISD employees and parents can nominate employees.

‒ Senate Bill 507 involves cameras in special education classrooms. Russ Johnson with True North Consulting Group showed the board a sample of what the live feed looks like. He said only specific personnel has access to the video. Over 50 percent of the cameras have been installed across the district. The goal is to have 100 percent installation before leaving for Christmas.

‒ Norris informed the board that the jumping pits and hurdles need to be replaced at MHS.

‒ An update was given on the joint city/school subcommittee

‒ During the technology project update, Johnson informed the board was informed the wire to wireless system has proved to have a higher capacity and reach. The project is in the design phase of syncing the whole district on one network. There was no vote on this.

The board wrapped up the meeting by voting on the appraisal district nominees for 2018. Trustee Matt Sanders motioned to award 834 votes for Tom Moore and 170 votes to Ken Marks. The board voted 3:4, with Tami Tobey, Glenn Hartson and Walton voting against. Hartson motioned to award Ken Marks 834 votes and 170 votes to Tom Moore. This passed with 4:3 votes with Prather, Hemphill and Sanders voting against.