Midlothian, TX - Twelve-year-old Kenzie Mills has been cooking almost as long as she's been alive.  The Midlothian native began helping in the kitchen at age 3

after watching her parents cook. After all that passion and practice, she has now competed on not one, but two reality TV cooking shows for kids. On Chopped Junior, which aired in the spring, Kenzie battled other young chefs in a fast-paced competition to impress a panel of judges. More recently, she spent weeks honing her skills on Top Chef Junior in hopes of winning $50,000.

Kenzie, whose signature bright blue hair made her one of the most recognizable contestants, was eliminated from Top Chef Junior on Friday, Dec. 8, placing her sixth in the overall competition. 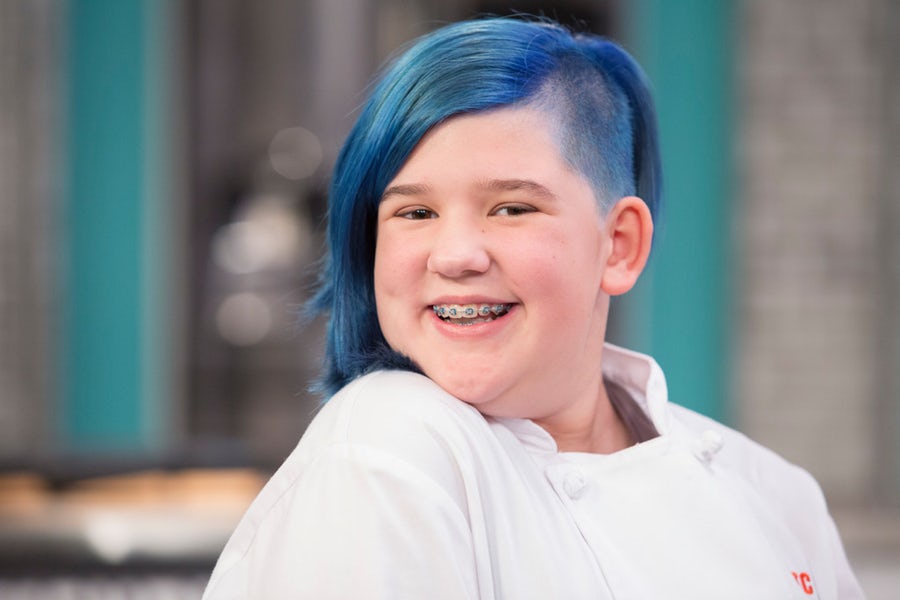 "I love being able to be really creative and express myself through food," says Kenzie, who is home-schooled. "I love that it brings friends and family to the table and makes everyone happy."

Growing up, Kenzie loved to cook shepherd's pie and pork chops with gravy and mashed potatoes -- stick-to-your-ribs recipes she inherited from her mom and dad. As she grew older, Kenzie developed a knack for grilling and smoking meats, especially brisket, she says. (She prefers smoking with applewood, for those who are curious.)

"I always watched my dad cook and use the smoker, but I really got into it when I was 6 or 7," Kenzie says. "I got up early, got up with him to talk while we changed the wood chips in the smoker and I would help him make rubs."

Kenzie brought Texas flare to nearly every meal she made on Top Chef Junior, thanks in part to smoked paprika, which is the one ingredient she can't live without. Perhaps ironically, however, her most memorable dish was the one that pushed her outside her comfort zone: roasted branzino with a brown butter herb sauce and lemon couscous.

But Kenzie contends the most valuable thing she learned from being on the show wasn't a new technique or ingredient.

"One of the most important things was teamwork because it's always kind of been me, or me and one of my parents, cooking," she says. "I've never had a whole team of people."

Now that her run on Top Chef Junior is over, Kenzie plans to find an internship at a restaurant in Dallas-Fort Worth, continue to refine her recipes, and play drums in a band with her older twin sisters.

Keep an eye out for that blue head of hair at Kenzie's three favorite Dallas restaurants: