Midlothian firefighters save Christmas for family after fire

Midlothian, TX - A Midlothian family lost their home but their Christmas was saved thanks to so some quick-thinking firefighters. They not only saved all of the gifts but also some precious mementos.

The homeowner’s adult daughter was in the house on Crest Drive when the fire started Sunday night. She and her two children, along with her boyfriend, all made it out safely. 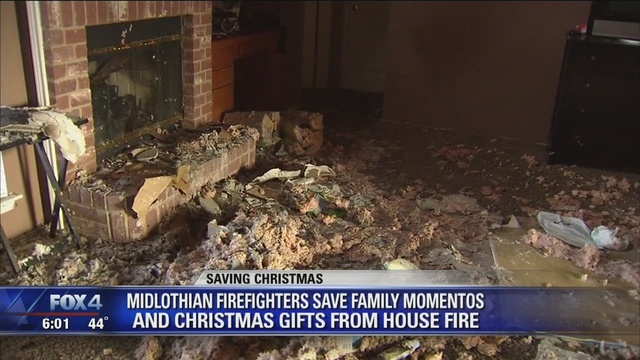 It was actually a neighbor who first spotted the flames and got their attention. The family said the fire was concentrated around the fireplace and may have started there.

Midlothian Fire Station No. 3 is just a couple of minutes down the road from the house. The firefighters arrived pretty quickly but the fire still caused a lot of damage. There are holes in the roof and melted electrical lines, plus smoke and water damage everywhere.

The family said the firefighters went above beyond. Once they got inside the house they gathered up all of the Christmas presents and covered them with a tarp to protect them. They also salvaged some precious photos and a buck head.

That gesture meant a whole lot to the family, especially on Christmas Eve.

“A lot of people nowadays don't. They do what they have to do and that's it. They did this because they were being kind. A lot of people don't care. So it's nice to see there are still people out there that care a lot about other people,” said Kaylee Smith, the homeowner’s daughter-in-law.

Many of the salvaged gifts were for the homeowner’s 8-year-old son. He was able to open them on Christmas morning.