Midlothian, TX - Independence is something that Charles Chapman has always valued. It has allowed him to live life on his terms and enjoy each moment to the fullest.

However, that freedom was almost taken from the Midlothian resident when he was diagnosed with leukemia in 2010.

Since that diagnosis, the Vietnam veteran has fought against the disease and can now manage its effects through medication. Some of that independence that he lost was returned to him earlier this year through the help of a nonprofit, Independence Fund, which recently donated an all-terrain tracked wheelchair.

“I am not disabled from (my) legs. Mine is from heart, lung and kidney failure. To get these chairs, it has to be a result of combat action, which Agent Orange is. Agent Orange got me with my lungs and kidneys and prevents me from walking a lot,” Chapman stated. “I couldn’t get outside and do much of anything, especially to walk. This came along and I never thought it my wildest dreams that I would get it. I applied, and sure enough, they told me that I had been approved. The next thing you know I have this chair. It lets me get out into the yard and the woods.”

Chapman applied around January or February for the chair with the help of the son of one of his wife’s co-workers and received it in April.

Chapman’s leukemia is a result of his exposure to Agent Orange while he served as a combat medic with the U.S. Army’s 25th Infantry Division.

“We were married four days when I got drafted. We were married 14 weeks when I got orders to go to Vietnam. I left here and went to ’Nam as a combat medic. Did my whole year over there as a combat medic with the 25th Infantry Division. Most combat medics spend six months in the field and six months back at a big base camp or a big hospital. I spent my whole tour out in ’Nam out in the jungle. A lot of great guys that looked after me,” Chapman said. “I signed up as a mechanic, a welder and I think that my third option was a heavy equipment operator. They didn’t need them. They needed medics. It was not a decision that I made, but after being one, I would not have been anything else.”

Chapman stated that the unit he was assigned to was the 65th Engineers but was attached to a demolition team. The team’s mission was to sweep for mines and destroyed bombs that didn’t discharge.

Chapman oversaw five medics and looked after and provided care for 75 to 160 soldiers in the unit. The area the unit operated in was near the Cambodia border. He was in country from 1968-1969.

Chapman remarked that the highest honor a combat medic could receive in the field is being called “Doc.”

“When you go in as a medic in a combat zone you get called by your name or medic, or hey you. They may call you by Doc and your last name. You only get the name Doc is when you get the honor and respect of your men,” Chapman noted. “I was there three months when I got that title. There had been guys that had been there for over a year and never got that name. When you are called ‘Doc’ that is the ultimate honor from your guys.”

Chapman started experiencing health problems in 2000 and had bypass heart surgery but recovered. He returned to work 12 weeks later. Health concerns popped up for the second time in 2010 when he began experiencing a lack of energy and was tired all of the time.

“I started to get tired. I never missed work. That is one thing is that I don’t miss is work, but I hardly could get out of the bed to go. I finally gave in and talked to a couple of the guys I worked with about being so tired,” Chapman explained. “So I went to the doctor, and they ran some blood work. She then called me and said, ‘you need to come back in.’ I said ‘ok’ and got in there, and she said, ‘I hate to tell you this, but you have leukemia.’ She said ‘your kidneys are failing and we have got to do some work and do some work fast. We don’t have time to tarry.’”

With the results from the blood work, Chapman was referred to Dr. Douglas Orr, who is a medical Oncologist at Baylor University Medical Center in Dallas. Orr was not able to see him that day, but they scheduled an appointment for Monday. After looking at the test results, Orr called Chapman and put him on medication prior to his first consultation.

“He (Orr) said ’I have never seen leukemia grow as fast as it is growing on you. It was tripling three times a day. I started out with 40,000 leukemia cells. That was on a Friday. Saturday I had 120,000 cells. Sunday it was three times. Monday it was three times that. The doctor told me that my kidneys were completely packed with dead cells. He said, ‘they (the kidneys) can’t filter,’” Chapman explained. “He said we have got to take an aggressive action and we are going to try to do it without chemo. He said I want you to take these pills, Gleevec, for a week and get back up here. So I went back in a week and did some blood work and it was looking a little better. He said let’s hang with them. About the third week, it started turning around and I have been on them ever since.”

According to the drug’s website, Gleevec helps shrink existing tumors that are inoperable or have spread, slows the spread of tumors and prevents some tumors from returning after surgery. Since the 2010 diagnoses, the medication has helped to keep the Chapman’s leukemia in a manageable state.

Chapman remarked that, before cancer, he lived a very active life and then, seemingly overnight, everything changed. His body placed new limits on him on what he physically could do and could not do. A conversation Chapman’s wife Betty had with a co-worker changed all of that in an instant. 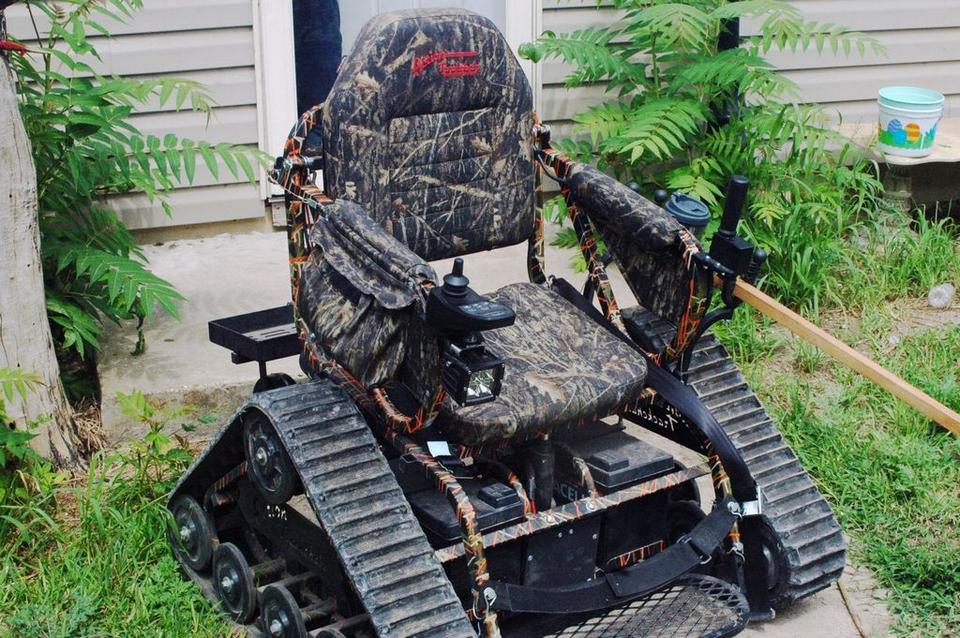 “My wife worked with a woman at Bank of America. One day they got to talking. She got to talking about her husband being a vet and that he goes to the VA. One word leads to another. Last year she called my wife and said, ‘Charles would probably qualify for one of those track chairs,’” Chapman Stated. “We met her up in town and her son helps people get them. He said all you need to do is apply. They either tell yup you got one or no you don’t. I thought they were not going to give me one of these. I can still walk. He said, ‘Yeah but you are limited.’ He helped me apply and we I just got the chair in April. ”

The nonprofit that Chapman applied through is called the Independence Fund. Its mission is to support injured and wounded veterans with the tools to achieve their independence and freedom. The fund’s mobility program allows disabled veterans to get back outside including all-terrain wheelchairs as well as adaptive bicycles.

According to the company’s website, the tracked chair is battery powered, has a speed up to 4 miles-per-hour, has a range of 10 miles and has rubber tracks. It is designed to go through many different types of terrain such as beaches, hiking trails, sand, muddy ground and snow.

“Prior to leukemia, I was an active person. Then all of a sudden all overnight I was done. It came on fast. Walking it varies. I might be able to walk from here to your car and it would not bother me one bit. Then again I might not make it to that tree and be so out of breath that it would hurt so bad that I can’t stand it in my chest that I almost have to lay down. That and my eyes go to burning where I can’t see,” Chapman said. “It means a lot (to have the chair). I don’t have to go and ask someone to check my propane tanks to see I am out of propane. I don’t have to ask someone to see if my fence is down. I can’t mow, but I can go and pick up a few items here in the yard and clean up a little bit. It gives me a lot of freedom. So if I want to go out and got to the lake and go fishing, I can travel around the lake.”

Chapman stated that he wants veterans to know that there are options to help them regain their mobility, freedom and independence. He also wants them to know that they are not alone and it is okay to reach out for help.

“I just want to get it out there because there are a lot of guys that have mobility issues that are veterans and have not the idea that something like this even exists,” Chapman noted. “I know I am not the only veteran in this county that is disabled that needs something like this.”

For more information about the Independence, fund visit its website at www.independencefund.org.