Midlothian, TX - As Midlothian continues to expand, services provided by the fire department are regularly evaluated to ensure it meets the needs of a growing population.  Since 2000 there has been a 57 percent increase in the number of emergency calls responded to by firefighters.

In fact, Midlothian firefighters are on track to make about 4,200 calls this year.

Midlothian Assistant Fire Chief Philip Brancato stated the department works to keep ahead of the growth by regularly looking at its operations.

The growing city of Midlothian's fire department, which has seen a 57 percent increase in calls since 2000, is continually evaluating its strategy. 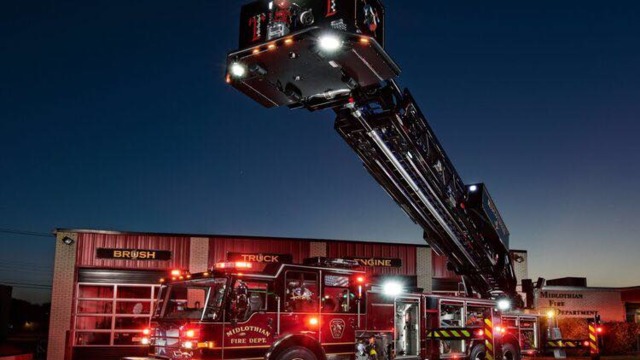 "A lot of folks get frustrated with the growth. Every city goes through this stuff and has for years. At the end of the day if you don't get in front of the curve it is going to be impossible to catch up a lot of times," Brancato said. "What we have done is we have updated our strategic plan, which is a five-year plan, every year. That includes apparatus, people, facilities and so forth."

Brancato stated last year the city gave its approval for the department to bring its staffing level to 19 per shift.

According to the National Fire Protection Association website, there were 1,160,459 local firefighters across the country in 2015. Of those, 30 percent were career firefighters, while the remaining 70 percent were volunteers. The study showed departments protecting larger communities tend to have a higher portion of firefighters in the age groups 30-39. Smaller cities have firefighters who average 40-49 years of age.

The five-year plan has outlined the need for several new positions on the administrative side of its operations. These positions would include a new inspector for the fire marshal's office and a battalion chief to serve as a fire training officer.